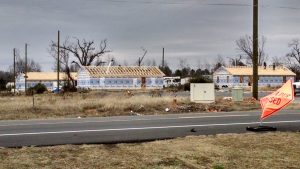 Grant funds from UMCOR and funds from the people and churches of the Arkansas Conference allowed Disaster Response Ministries to help rebuild homes destroyed by the 2014 Central Arkansas Tornado.

Individuals, families, groups, classes and churches of the Arkansas Conference are encouraged to support disaster response in the following ways:

UMCOR Sunday
Participate in the annual denomination-wide offering taken during Lent and known as UMCOR Sunday. The offering goes to the United Methodist Committee on Relief and is the most common source of funds that allow them to provide an immediate response. This offering of undesignated funds allows a check to be issued within 24-48 hours of request after a disaster event. This offering also allows UMCOR to use 100% of designated funds to assist those affected by disaster.

The Advance
Designated Advances are available for UMCOR US Disaster Response (#901670) and UMCOR International Disaster Response (#982450). 100% of funds donated to the Advance are designated to assist those affected by disaster. 100% is possible due to the generous donations of undesignated funds made on UMCOR Sunday.Click here to make a donation for response to disasters.