“The Church of Jesus Christ should be taking the lead in dismantling racism
because it is a matter of faith, justice and morality.” – Bishop Gary Mueller

Is your church welcoming a new pastor into a cross-racial and cross-cultural (CR/CC) ministry?

Use the following resources to help your church foster a welcoming and meaningful transition for your pastor and the congregation:

White Fragility, by Robin DiAngelo, is a direct conversation on racism, white privilege and how hard it is for white people to have that conversation. What makes this work essential as a stepping stone to dismantling racism is from the perspective it is written. Too often the conversation of racism is written from the perspective of a person experiencing racism. This can make the conversation difficult at best, even abstract in understanding how white privilege turns to white fragility and the part it plays in how we approach the conversation of racism. DiAngelo helps the reader understand how to identify, or understand micro-aggressive behaviors, structures, mechanisms, laws, and systemic actions which continue to promote racist ideologies either intentional or unintentional.

DiAngelo speaks from the perspective of a “white person” who lives with the covering of white framing, or white privilege and begins the conversation in how to identify or recognize when structures, mechanisms, actions and complicit actions have promoted some of the same disenfranchising, marginalizing, systemic actions , which origins come from slavery and has recast itself with every generation since the emancipation proclamation, and the initial acts of reconstruction. DiAngelo makes it clear that this is a lifework not a check in the box, receive your certification moment. Instead, she brings honest conversation for people who struggle with white fragility in hopes of becoming a better self.

DiAngelo lets the reader know that there should be a tension which calls for internal work. She outlines how it is revealed through classism, institutions, cultural representations, media, textbooks and the social narrative of historical record. White fragility, is a work which pulls at the first brick in dismantling racism in a white conversation, which will allow the capacity and space for honest conversation, renewal and a pathway to restorative work toward racial justice.

How To Be An Antiracist
Ibram X. Kendi

Kendi’s concept of antiracism reenergizes and reshapes the conversation about racial justice in America–but even more fundamentally, points us toward liberating new ways of thinking about ourselves and each other. Instead of working with the policies and system we have in place, Kendi asks us to think about what an antiracist society might look like, and how we can play an active role in building it.

In his memoir, Kendi weaves together a combination of ethics, history, law, and science–including the story of his own awakening to antiracism–bringing it all together in a cogent, accessible form. He begins by helping us rethink our most deeply held, if implicit, beliefs and our most intimate personal relationships (including beliefs about race and IQ and interracial social relations) and reexamines the policies and larger social arrangements we support. How To Be An Antiracist promises to become an essential book for anyone who wants to go beyond an awareness of racism to the next step of contributing to the formation of a truly just and equitable society.

King shared his theological processes and convictions as he grappled with the sting of systemic racism and his response as an activist, pastor, Christian, man. King makes the case that the greatest weapon humanity has to fend off and defeat the atrocities of racism, violence, structural systems and the people who have been complicit in perpetuating this culture is not returning violent act for violent act. This type of condition can only be overcome and transformed by love.

In this work King reflects on his own journey as an activist and how his theology, and spiritual formation became key in his response to the injustices and social conditions of society. Questions formed around what’s at stake; and how to create a culture of growth, understanding and intentional discipleship that will lead to a transforming moment are the focus of this book.

King challenges the reader to revisit the theology of Jesus and reevaluate personal beliefs, social structures, and man’s ideology in order to reaffirm a relationship to God, Christ and encourage the soul. He continues to share the importance of becoming a nonconformist, loving your neighbor, loving your enemies, answering the call at midnight as points of wisdom and theological epiphany. King shares his faith in action and relates Biblical teachings to real life issues. How we engage this world and the issues of humanity are relatable and important in our response to God’s love. As King brings honest conversation and his experiences, he is left with a conviction that it is essential for society to find the strength to love.

The New Jim Crow: Mass Incarceration in the Age of Colorblindness
Michelle Alexander

Michelle Alexander puts pen to paper to shed light on how cast systems have systematically created an environment where the atrocities of racism not only exist, but thrive. W. E. Du Boise states, “former slaves experience a brief moment in the sun”, before being returned to a status akin to slavery.

Beginning with slavery and the Constitution, declarations, amendments and laws have be utilized to devalue, deconstruct, and control the rights, privileges and freedoms of people of color. Despite the Civil war, Emancipation Proclamation, and The Reconstruction, people of color have been at the mercy of organized systems designed to create, maintain and secure a cast which denies the identity of people of color as human beings, with human rights.

Alexander shows how these cast systems also were created to prevent cooperative alliances between people who landed economically at the bottom of the social system in America (Jamestown). And through these initiatives created systems which would allow ‘Jim Crow’ ideology and the elite to manipulate the use of economically deprived people and their organizations (bondsmen, police, etc.) to solidify and adapt the same slave tactics to conform to the context of the population at large and create new ‘Jim Crow’ cast systems for modern times.

Michelle Alexander’s book, The New Jim Crow, brings honest conversation to the subject of systemic racism and how it survives in modern society. Alexander paints the picture of racism and takes the reader through a timeline of significant moments to illustrate the case against ‘The New Jim Crow’.

“Every system of control depends for its survival on the tangible and intangible benefits provided to those who are responsible for the system’s maintenance and administration”. (Michelle Alexander p. 71)

Sue is the first to put forth a comprehensive work depicting the multi-dynamics of microaggressions. Sue defines ‘Microaggressions’ as a brief exchange that sends denigrating messages to certain individuals because of their group membership. This makes the act of microaggressions not a monopolized condition, but an open forum that identifies its effect on all people according to race, gender or sexual orientation.

In the Psychological Dilemmas and Dynamics of Microaggressions, Sue recounts an event where he and a African American friend catch a plane from New York to Boston. They are told that they could sit anywhere because they were the only people on the flight. The men choose to sit near the front while engaging in a conversation. As the Flight attendant prepares to close the door, three white males in suits get on. After hearing the same option to sit anywhere, they choose to sit in front of Sue and his friend. The flight attendant then addresses Sue and asks them to move to the rear of the plane to distribute weight during the flight. Sue addresses the situation with the flight attendant asking the question, “Do you realize that you have basically asked two men of color to go to the back of the bus?” The flight attendant response was that she had never been accused of that and that she didn’t see color.

Sue uses this story to set the stage of perspective of the flight attendant, and the passengers of color. Each brings with them experiences and interpretations. The situation is infused with a clash of racial realities, invisibility of unintentional bias, perceived minimal harm and the catch-22 of responding. (p.44)

Sue brings the scope of ’Microaggressions’ and unpacks them so that the individual might be able to self-identify, see the intent of others and gain the ability to navigate the complex realm of conversations while being intentional in understanding how Microaggressions are formed and how they can affect the interactions with others and the ability to cause harm to others. 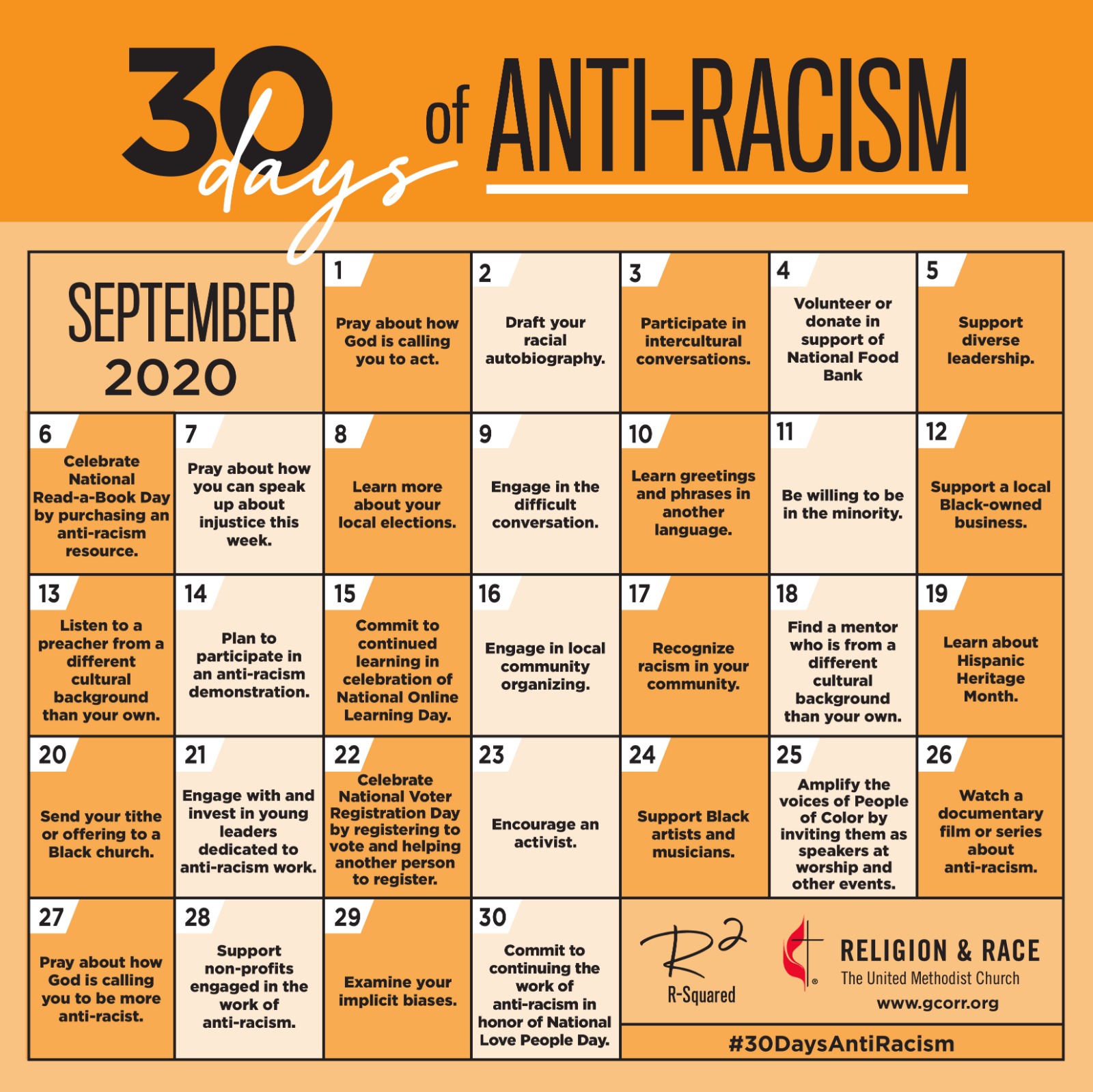 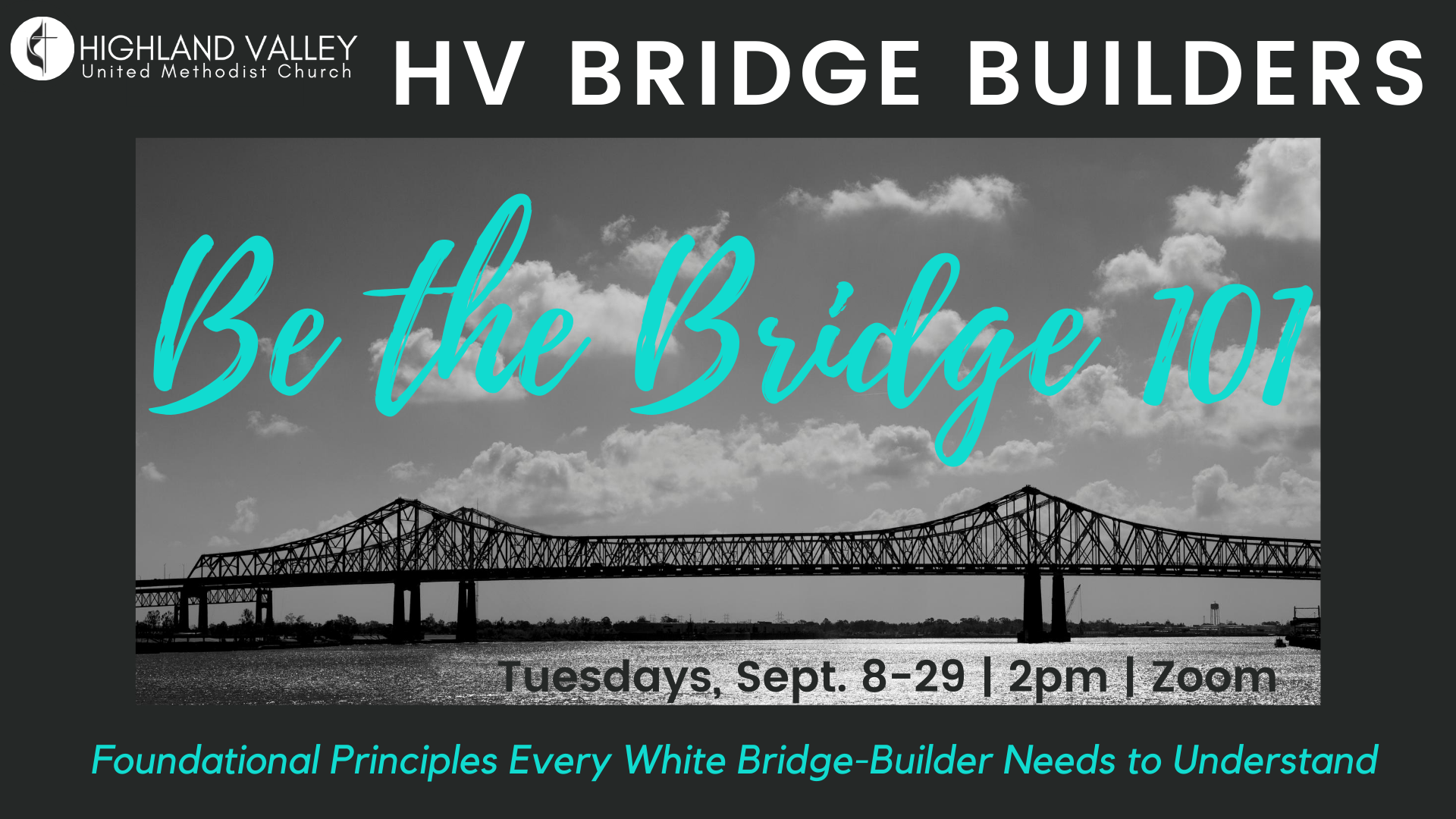 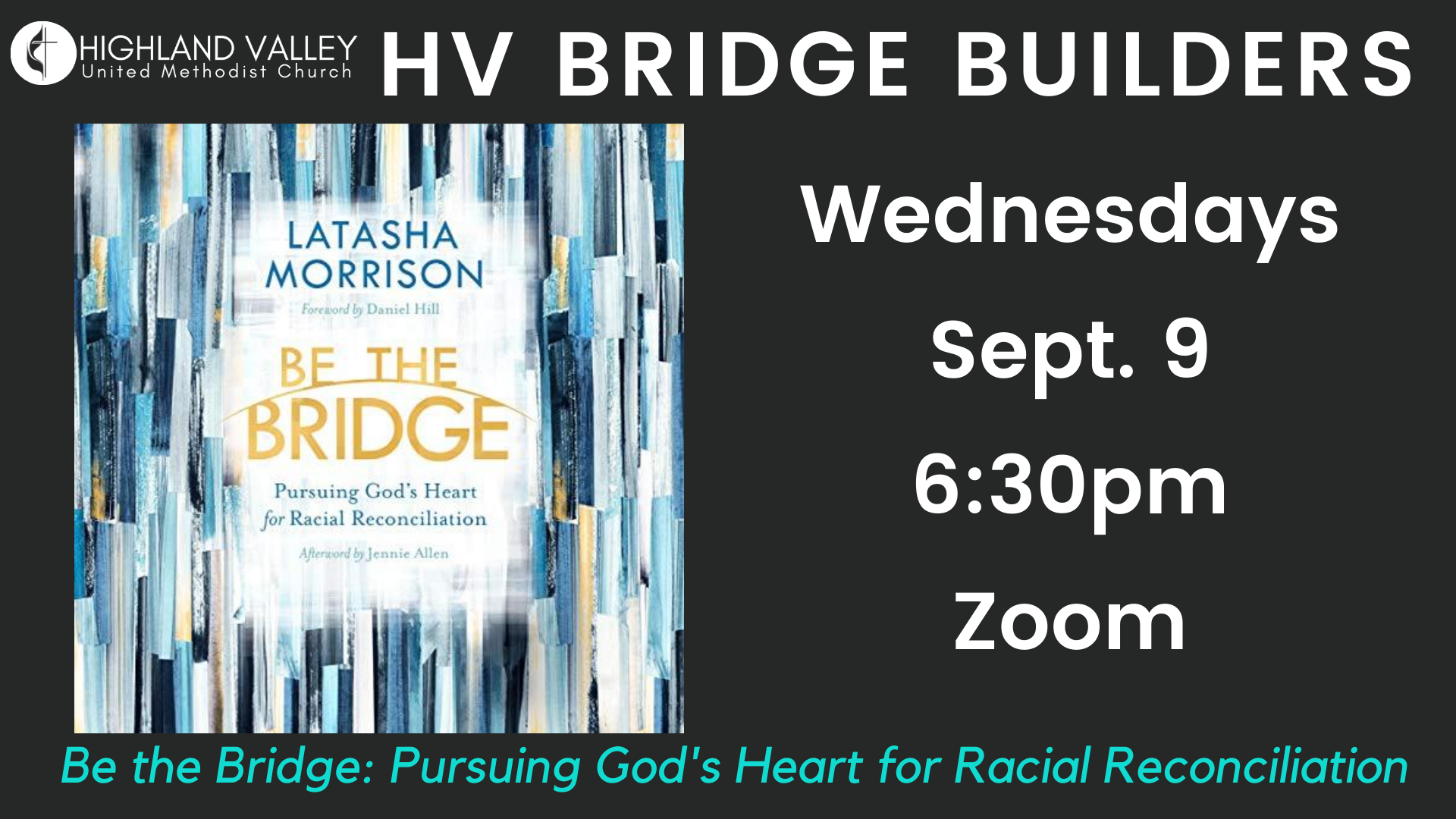 Participants are invited to join Ibram Kendi’s experience as he relays his personal journey through the landscape of racism. We, too, will recall when we first became aware of racism in our shared appreciation of one another and the challenges we face to dismantle racism.

Click here to register. You must register in order to participate! 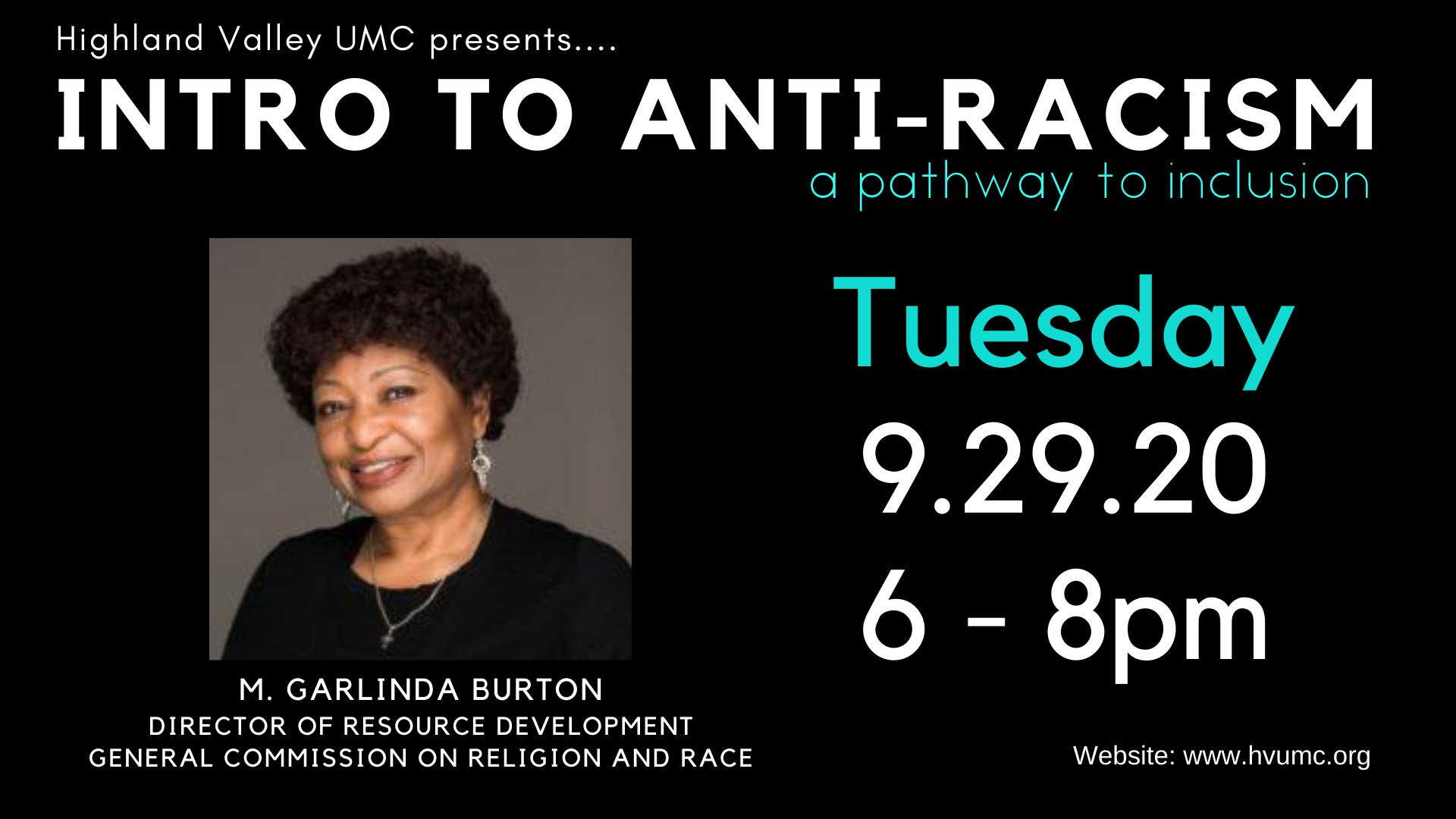 Anti-Racism 101: Required Skills for White People Who Want to be Allies
from the UMC General Commission on Religion and Race

This online course centers on one big idea: the differences between anti-racism and defending oneself against charges of racism. As a 101 course, the content will focus on defining anti-racism as interrupting and dismantling racism; identifying which actions fall into categories of anti-racism (avoidance or defending oneself against charges of racism); and building resilience to white fragility. The three sessions will roughly fall under these categories: theory (big idea); practice (identifying the differences); personal (internal work).

By taking this course, students will:

You Are Here: First Steps for White Christians on Race and Racism
an online course from the UMC General Commission on Religion and Race

You Are Here: First Steps for White Christians on Race and Racism is an online course for Christians who want to acquire a fundamental understanding of race and racism from a biblical perspective. This four-part self-directed course offers videos featuring Robin DiAngelo and Rev. Dr. Anderson Hooker, reflections, and activities to help people of faith to recognize racism and begin to challenge it in their lives. For more information, please click here.

Implicit Bias: What We Don’t Think We Think
an online course from the UMC General Commission on Religion and Race

Implicit Bias is all about ‘what we don’t think we think’ — wait a minute, what?!?

As each of us experiences life — in school, at home, in church, at work, watching T.V. — we are surrounded by a number of biases. Some of these biases we consciously accept as our own, some we consciously reject, while many more fall into the subconscious level. Even though we are not aware of implicit biases, they constantly help to form our beliefs, values, ideas, and actions every day.

As followers of Jesus, we are created and called by the God who consistently questions beliefs, values, and motives. By taking an intentional look at implicit bias and the ways it works in our brains and in our actions, we commit to rooting out the biases that are corrupted by stereotype or prejudice and separate us from the Beloved Community.