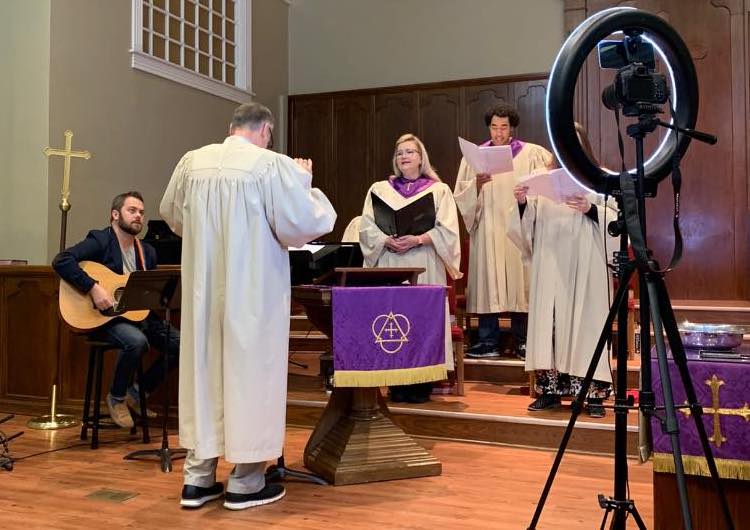 In Jeremiah 32, we learn that while Jeremiah was in prison as the people of Israel were facing the Babylonian exile, Jeremiah bought a field in the territory of Benjamin. That did not make any sense! He just bought a field in a land that will be owned by another nation very shortly. Yet, to paraphrase another verse from Jeremiah (29:11), Jeremiah knows the plans God has for God’s people, plans for a future filled with hope. He knows God will lead the people back to this place, and when God does, Jeremiah will have a home.

FUMC Bentonville is using this story as a blueprint for the investment they are making in becoming a hybrid campus. They are investing in a field too, only this field is not bound by geography, but exists online. It does not make it any less real, however, and Bentonville is already seeing this field bear fruit.

“We have people who join us for the first time in person practically every week now. I hesitate to call them guests or visitors, however, because with one exception, every single one of them has worshipped with us online, sometimes for months!” explains Rev. Dr. Michelle Morris, senior pastor at Bentonville. 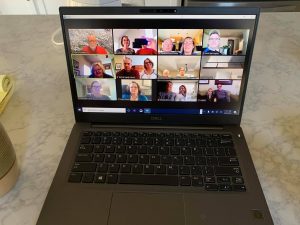 FUMC Bentonville Sunday school class meeting online at the beginning of the pandemic in March 2020.

Steve and Robin Trainor are two examples. When the pandemic hit, they lived in the San Francisco Bay area of California, but they knew they were moving to Northwest Arkansas. They found FUMC Bentonville online early in the pandemic and began worshiping. They also regularly tuned in for Wednesday with the Weatherfords. Eighteen months later, they finally walked into the sanctuary. “It was like meeting long lost relatives,” remarked Steve. Reflecting on how many times they have moved as a military family, Robin added, “This was definitely our easiest move…probably part of that was because we already had a church home when we moved here.”

Recognizing that the church’s front door is no longer the two large double doors into the sanctuary but is instead their online presence, Bentonville has empowered some to serve as an online hospitality team. They comment on the worship service and greet the people who show up there. “It is like a digital handshake,” says Audra Johnston, a member of that team and herself a newcomer to FUMC Bentonville who has only worshiped online since the beginning of the pandemic.

Their hybrid investment does not only reach new people, it also helps current congregants stay connected. Whether traveling for business or home recovering from illness, people have appreciated being able to hop in on meetings, join Bible studies, or stay connected to their small group. When she fell and broke her hip while visiting her son in Dallas, Liz Driver was able to continue to worship. Also, she became an accidental evangelist as she watched Sunday services. “The nurses who drifted in while the choir was singing were really excited by our music,” she shared. Now several people worship with the church from Dallas.

“Jeremiah took a big risk when he bought that field at the onset of the exile. But he trusted God had a future for them. We were given the opportunity to invest in a field when we were in the midst of an exile of sorts,” explained Rev. Dr. Morris, “And now we are so excited to watch it grow.” If you have questions about how to grow this field that is before you, the Arkansas Conference has a number of resources available, including through the online learning system CouRSe. Bentonville is also committed to knowledge sharing on how to make hybrids accessible, regardless of size and budget.

If you want to learn more about multi-access connection, reach out by email to Amy Ezell at amy.ezell@arumc.org or contact Rev. Dr. Morris at michelle.morris@arumc.org.

It’s time to buy a field and watch it grow!