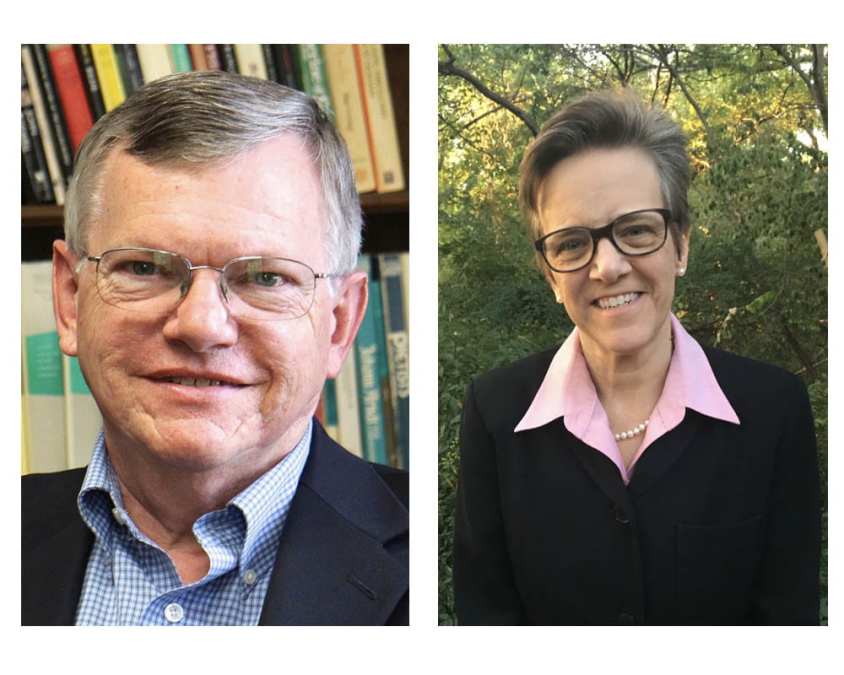 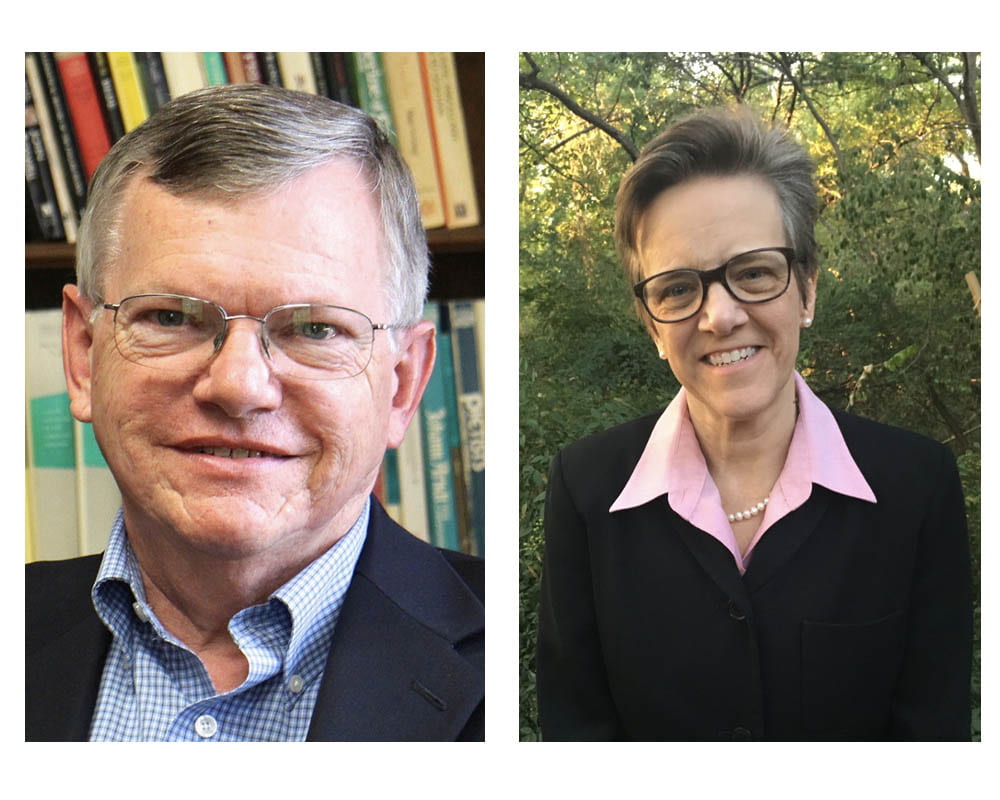 DALLAS (SMU) – Perkins School of Theology announces the appointment of two new holders of two endowed chairs: Dr. Rebekah Miles as the Susanna Wesley Centennial Professor of Practical Theology and Dr. Ted Campbell as the Albert Cook Outler Professor of Wesley Studies. Both appointments begin on June 1, 2021. The recommendations were made by Perkins Dean Craig C. Hill and supported by the unanimous vote of those holding chairs at the Perkins School of Theology.

“We are very pleased to announce the appointment of Dr. Miles and Dr. Campbell to continue the legacy of these two prestigious endowed chairs,” said Dean Craig Hill. “These two professors have been leaders in the Perkins community as well as outstanding scholars and teachers, and their appointments underscore Perkins’ abiding commitment to Methodist and Wesleyan studies.”

Dr. Rebekah “Beka” Miles, Professor of Ethics and Practical Theology, was appointed Susanna Wesley Centennial Professor of Practical Theology, a chair recently vacated by Dr. Evelyn Parker, Associate Dean for Academic Affairs, who retires this semester, and who was named inaugural holder of the chair in 2015. The chair was established in 2014 by a $2.5 million gift made by an anonymous donor through the Texas Methodist Foundation. It honors Susanna Wesley, frequently referred to as “the mother of Methodism.” Her sons, John and Charles Wesley, led a revival within the 18th century Anglican Church that sparked the emergence of global Methodism generally and the Methodist Episcopal Church in the American colonies. Historians point to the “practical divinity” embraced by Susanna and her sons John and Charles after her.

Miles is an ordained elder in the Arkansas Annual Conference of the United Methodist Church and has served five times as a clergy delegate to the United Methodist General Conference. A recipient of Henry Luce III Fellowship in Theology, Miles’ writes in the areas of Christian ethics, practical theology, and Wesley studies, including an edited collection of the works of Methodist practical theologian Georgia Harkness. She is now co-editing Volume 15: Domestic, Moral, Political, and Economic Writings in The Bicentennial Edition of the Works of John Wesley.

Dr. Ted Campbell, Professor of Church History, was appointed Albert Cook Outler Professor of Wesley Studies. Rev. Dr. William J. Abraham, who has held the chair since 1995, retires this semester. The chair was established in 1982 in honor of Albert Cook Outler (1908 – 1989), a longtime faculty member at Perkins as well as a distinguished Methodist theologian and philosopher. Outler made crucial contributions to the scholarship of John Wesley including a critical selection of John Wesley’s work published in the Library of Protestant Thought which led to his leadership in the Wesley Works editorial project, now The Bicentennial Edition of the Works of John Wesley. Funding for the chair was provided by the Texas Annual Conference. The chair is designated to promoting the study of John Wesley, as well as his brother Charles Wesley and other leading Methodist thinkers.

Campbell is an ordained elder of the Texas Annual Conference of the United Methodist Church; a former president of the Charles Wesley Society (1999-2003); and a delegate to the Faith and Order Commission of the National Council of Churches in the USA (1992-2002).  Campbell served as the American Convenor for the Oxford Institute of Methodist Theological Studies in 2013 and as co-convenor of the Wesleyan and Methodist Studies Unit of the American Academy of Religion. His writings in Wesley Studies include having edited the third volume of John Wesley’s letters, and he is now editing the fourth volume for The Bicentennial Edition of the Works of John Wesley.

Miles and Campbell have also worked closely together, including their co-authorship of Wesley and the Quadrilateral with Scott Jones, Randy Maddox, and Stephen Gunter.  They are also both John Wesley Fellows of A Foundation for Theological Education (AFTE).

Perkins is also saying farewell to Parker and Abraham, who are retiring after long and distinguished careers at Perkins.

Parker spent one of the last years of her Perkins career in South Africa as a 2019-2020 U.S. Fulbright Scholar, based at the Desmond Tutu Centre for Religion and Social Justice and the Department of Theology and Religion at the University of Western Cape in Cape Town. Her academic focus included religious identity and spiritual formation in African American adolescents, adolescents in sociopolitical movements and their understanding of vocation, adolescent resiliency and vocation. Parker helped spearhead the move of Perkins’s Houston/Galveston Program to the Houston Medical Center, where the program is now affiliated with the Houston Methodist Hospital (HMH), St. John’s UMC, and St. Paul UMC.  An active member of Kirkwood Temple CME Church in Dallas, Parker serves as a representative of the Christian Methodist Episcopal (CME) denomination to the World Council of Churches. She has served in many roles throughout the CME connection.

Abraham has been a prolific author and sought-after lecturer. An ordained elder in the Rio Texas Conference of the United Methodist Church, he served on the General Commission on Unity and Interreligious Concerns of the United Methodist Church (1992-present). He was the recipient of Pew Evangelical Scholars Program Grant, Pew Charitable Trusts (1993-1996) and Joint Book of the Year Award from the Institute of Christian Studies for Canon and Criterion in Christian Theology (1999). In 2018, he was the recipient of the SMU Faculty Career Achievement Award for his remarkable career in teaching and scholarship with many contributions to Wesley studies, including a new edition of John Wesley’s Standard Sermons released in the last month by Wesley’s Foundery Books.

Following Bridwell Library’s acquisition of the massive resources of the World Methodist Historical Museum, and building on the existing Wesleyana and Methodistica collections at the Library, these appointments will make clear the commitment of Perkins School of Theology to leadership in Wesleyan and Methodist studies.

Perkins School of Theology, founded in 1911, is one of five official University-related schools of theology of The United Methodist Church. Degree programs include the Master of Divinity, Master of Sacred Music, Master of Theological Studies, Master of Arts in Ministry, Master of Theology, Doctor of Ministry, and Doctor of Pastoral Music as well as the Ph.D., in cooperation with The Graduate Program in Religious Studies at SMU’s Dedman College of Humanities and Sciences.