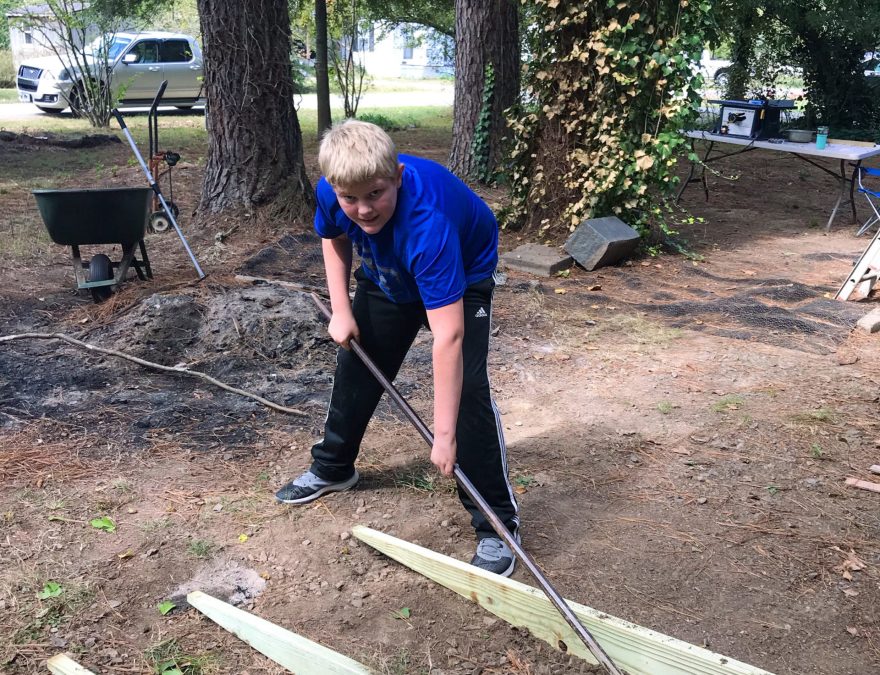 Members of Sylvan Hills UMC’s United Methodist Men recently built a wheelchair ramp for a former nursery supervisor at the church. The group is intergenerational, making it unique compared to many other UMM groups. || Photo provided by Sylvan Hills UMC

In an effort to reciprocate the devotion of one of the elderly members of Sylvan Hills United Methodist Church in Sherwood, members of the congregation, including the United Methodist men and women, and youth group, built a wheelchair ramp for easier access to her daughter’s house.

“This lady has participated and contributed so much to the church and all of its activities over the years,” said Newton Skiles, the treasurer for the men’s group. “It was a way to repay her for everything she has done and helped with over the years.

“She is a very special person and a very personable lady … This was something we needed to do and wanted to do for her.”

The elderly member was a former nursery supervisor for the church and recently moved in with her daughter in Jacksonville.

Skiles said she and her family have been members of the church for many years. He said the daughter was worried her mom, who primarily uses a cane to maneuver, would fall. He said one of the young ladies brought it to the group’s attention and they were able to get the youth involved as well.

“The Methodist men and women were able to split the cost of the materials,” Skiles said. “We have a couple of members who are excellent carpenters and who have built ramps before.

“We were able to finish in a little over a day.”

“There was a need expressed by one of our members who was moving into her daughter’s house,” said the Rev. Sara Bayles Charlton. “The cost of materials was donated at a discount from the lumber supplier and they were able to finish it that Saturday by mid-afternoon.”

Bayles Charlton has been the pastor at Sylvan Hills for a year and a half.

“I thought it was a very moving gesture and a multi-generational mission as we cared for each other as a church family,” she said.

Bayles Charlton said the men’s group has about a dozen members and the women have well over 50 members. She said about five or six members from the youth group showed up to help build.

“Our church is unique because we have six or seven different generations,” Bayles Charlton said. “We had kids as young as three or five helping build the ramp – we had a whole range of people helping there.

“The church life at Sylvan Hills is amazing. A wide range of ages coming together for the mission of the gospel.”

Bayles Charlton said construction of the ramp was a need that arose, “but the men’s group can do just about anything – all sorts of projects. It really depends on the need.”

The church also hosts a monthly wellness clinic and in 2019, collected 5,000 pounds of food for its food pantry. She said they also have a community garden and a blessing box.

“We have an abundance of ministries that bless our community and church,” she said.

The wellness clinic usually meets the first Thursday of every month and allows members of the community to receive blood pressure and sugar checks, doctor visits, immunizations for back to school, as well as physicals and flu shots.

“We held a vision and hearing test in December and we will hold a dental check in February,” she said. “It is all free for our community. We probably serve 4 to 5,000 people a year and we host in different communities as well.”

The church has hosted the clinic for a little under five years.

“I think it is a real vital ministry,” she said. “We see all sorts of people.”

Skiles and his family joined the church in 1990 and he was the president of the men’s club in the mid to late 90s and has been the treasurer for more than a decade. “We have had an active group over the years,” he said.

Skiles said the men’s group has several fundraisers throughout the year, but its biggest is its annual golf tournament in May.

Some of their projects include supporting the church’s ministry partnerships with the local schools in the community, as well as assisting with the Angel Tree and the church’s early learning center or preschool.

This month, the Methodist Men’s group will host its annual chili cook-off and Dessert Diva competition on Jan. 19.

There is no cost for entry, but donations are accepted. Proceeds from the event will benefit both groups. Bayles Charlton said the donations go towards ministries like the wheelchair ramp or other local mission projects. She said last year they had 10 entries for chili.

“The chili cook-off has been around for 25 years or so,” Skiles said. “In the early days of Sherwood, one of our mayors, Bill Henson, was a longtime member of the church and really liked chili.

“After he died, we started thinking about ways to honor his memory. We took this one as a project and every January, we have a chili cook-off. We have had quite a number of pots of chili.”

He said a few years ago, they added the Dessert Diva, where members of the women’s group will bake desserts to go along with the chili. Skiles said he has been named the Chili King a couple of times over the years.

“There are some excellent recipes, which always amazes me,” he said. “It always amazes me that you can have so many different kinds of chili with basically the same ingredients.

“It really is a unique thing.”