Free Breakfast, Every Saturday
Batesville UMC Has Been Cooking Up Hot Meals for Their Community Every Weekend for 7 Years 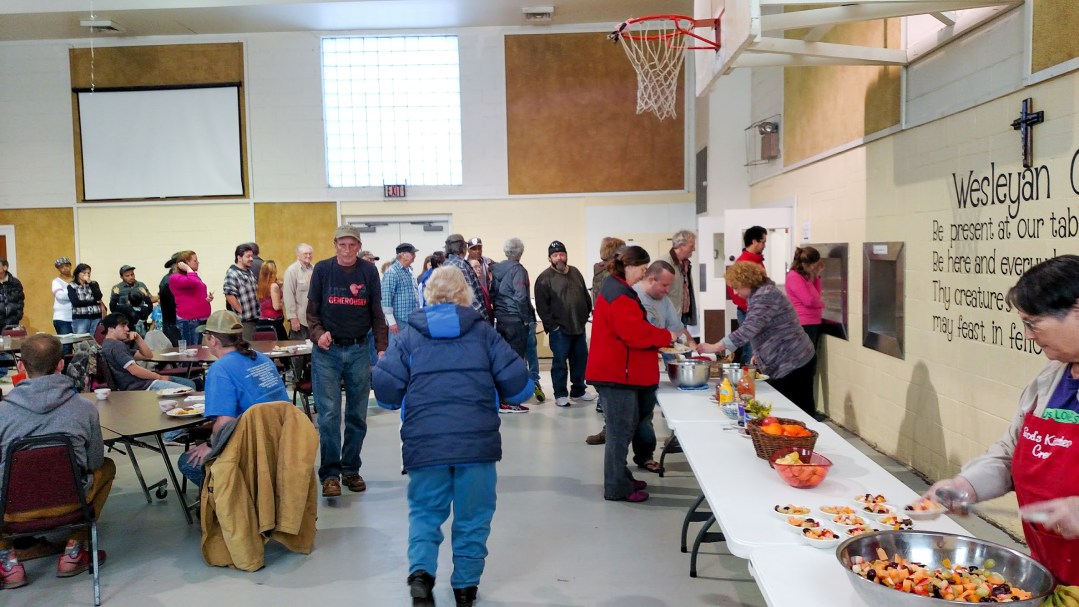 Every Saturday morning, Batesville United Methodist Church hosts a free breakfast for the community. They make enough eggs, bacon, sausage, gravy and the like to serve 80 people.

“And we serve all the meals on glass plates and glass coffee cups,” said organizer Mike Wilson. “We decided from the very beginning, we wanted to give them as much dignity as possible by doing that.”

Jeannie Wagoner, who has been a volunteer for the breakfast since the very beginning, said someone once told her that by serving the food on real plates with real silverware, “they felt like they were company.”

“They are our company, and we want to use our best things to serve and to bring pleasure to them,” Wagoner said. “They are so thankful. We can’t change their lifestyle or mannerisms, but we can be together for breakfast and they are guests in our church home.”

The breakfast began about seven years ago and the menu has been pretty consistent over the years. Wilson said initially the breakfast was a way to provide for the homeless and those that were really in need.

“But it has become a community gathering center where we can enjoy breakfast together,” he said. “Seventy five percent of the people there need a place to get a hot meal, but the rest are there for fellowship – but we can call both family.

“It is a time for community, prayers and singing.”

He said it was initially set up for those who really need it, and the church still serves that crowd, but it has opened up to the whole community.

“We socialize with them, we walk around and talk, and we try to get to know them,” Wagoner said. “It is the fellowship of the people and getting acquainted with them.”

Wagoner said when she first started volunteering for the ministry, some of the guests wouldn’t even make eye contact with her. She said they would take their food and sit down.

“But now, they hug us, they love us, and I think it is because they realize we are all people, we are all God’s children,” Wagoner said. “They want to extend their love to us, just like we want to extend our love to them. It is not one-sided.”

Wilson said it is phenomenal the number of prayer requests they get each week through the breakfast.

“I can’t stand to see a child hungry or someone standing on the corner begging for food,” Wilson said. “Having some kind of food ministry is a way we can reach a larger number at a time.

“… We thought having some kind of meal service was the best way we could reach the most people. We are about making disciples, but if they are starving, we have to meet their needs first.”

Wilson said he and his wife thought for years of starting a soup kitchen, but it just didn’t fit the environment in Batesville.

“We had a men’s breakfast for years, and we deduced that the day is much better if it starts with a hot breakfast,” Wilson said. “We met once and made the decision to do it, and brought it up at the council meeting and went forward from there.”

The church has set aside a set amount for the breakfast but, according to Wilson, has yet to be touched thanks to donations from the Sunday School classes and the community. “This is a special church, everyone is so giving, it just fills your heart,” Wilson said.

“One of the people we served brought me apples the other day,” Wagoner said. “When she was in the store, she bought apples for us, because she knows we serve it at breakfast.

“Some of the people that come, help clean up or sweep the floor, or clean the tables – they are a great bunch of people.”

Senior Pastor Mark McDonald said when he was appointed as pastor, one of the first things he wanted to do was visit a few ministries that the Rev. Justin Ledbetter had told him about – the Wednesday youth and children’s ministry, and the Saturday breakfast.

“The members of the church knew their names and their stories … I was amazed at how the workers knew everybody personally and discovered it wasn’t that way just with a couple of workers. They have become a family in Christ.”

He said on his initial visit, he met volunteers from this congregation, as well as other congregations in the community and learned that 15 or so come every single week, including missionaries from the Church of Jesus Christ of Latter-day Saints.

“A lot of people that are involved in the church volunteer for this ministry,” said Joe Wagoner, Jeannie’s husband and volunteer. “We try to make everyone feel like they are family and we aren’t just serving them.

“I don’t know anybody that’s there for any glorification. We are there to serve.”

Jeannie said she got involved because she is very social and likes meeting people.

“I needed to be a servant in that place, and it was something I could do, and I just had to know how to cut up the fruit,” she said.

McDonald said after he arrived, he found that many of the people who come to eat breakfast consider Batesville UMC their church. He said some arrive an hour or two early and simply drink coffee and visit.

“Others help with set up or clean up,” McDonald said. “Each week, when the food is ready, different people share a devotional. Some lead singing, some tell stories and some preach the gospel.

“We have a good time serving these folks and it is a blessing for people who are doing the service,” Wilson said. “I don’t care if they don’t come to our church, I just want them to go to church.”

He said for most of them, the Saturday morning breakfast is the only church they get.

“They know there is a place to have breakfast and they know there are people here that care about them,” Wilson said. “And they are going to meet their friends here too.”