Four Churches Join Forces, Provide a Home for the Homeless 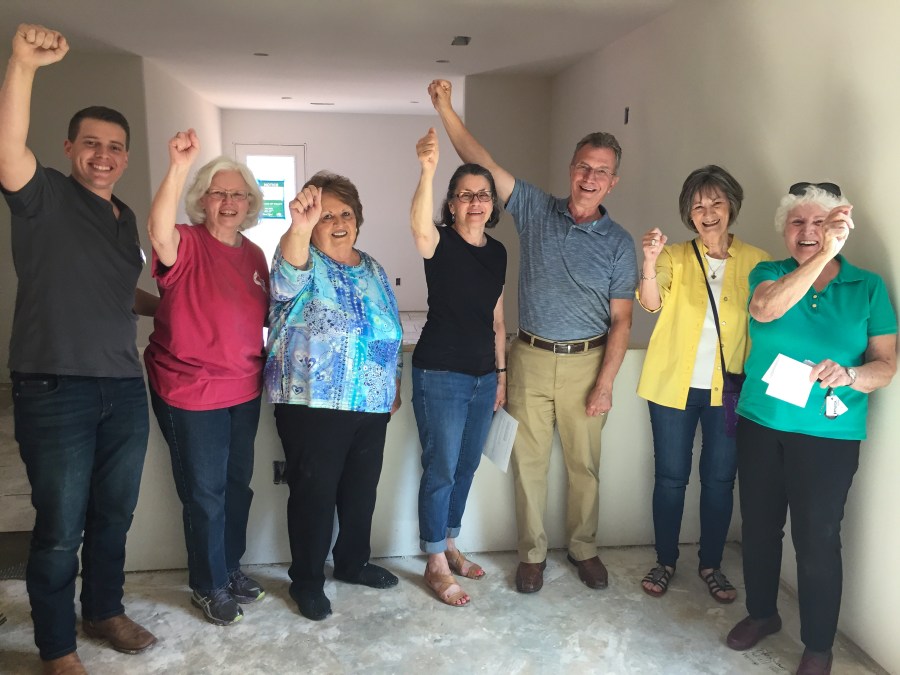 About two years ago, four United Methodist churches in Rogers — Central UMC, First UMC, Oakley Chapel UMC and Grace UMC — came together to find the biggest needs not just in Rogers, but Benton County. The Rev. Les Oliver said the Methodist churches, along with St. Andrew’s Episcopal Church of Rogers, came to recognize that teen and young adult homelessness was a major issue in their community that no one was addressing.

“Eighteen-year-olds were aging out of the foster care center or were kicked out of their parent’s homes and living in cars,” Oliver said. “It really touched our hearts. About a year ago, we started doing fundraisers and different things to try to figure out the best way to have a home for homeless young adults and teenagers in the area.”

Oliver is the minister of Missions at Central United Methodist of Rogers, and he said the three other churches decided to model their new home after Christopher’s House in Springdale. Christopher’s House is a partnership between First United Methodist Church Springdale and Teen Action Support Center, or TASC, to provide a home for families needing transitional housing, according to the website at firstchurchspringdale.org.

Oliver said at first, the group struggled to find the money to purchase a house. They tried having bake sales and other similar fundraisers, but it wasn’t enough. It wasn’t until an anonymous donor wanted to purchase the house that they really got started.

“They wanted information on what we were trying to do, and this person came to me and I told them, ‘Why don’t you come to our monthly meeting?’” Oliver said. “After the meeting, he said he wanted to buy a house for the ministry.”

Oliver said the name of the house, the Tapestry Home, refers to the weaving together of the churches and the community, with the goal of ending young adult homelessness. 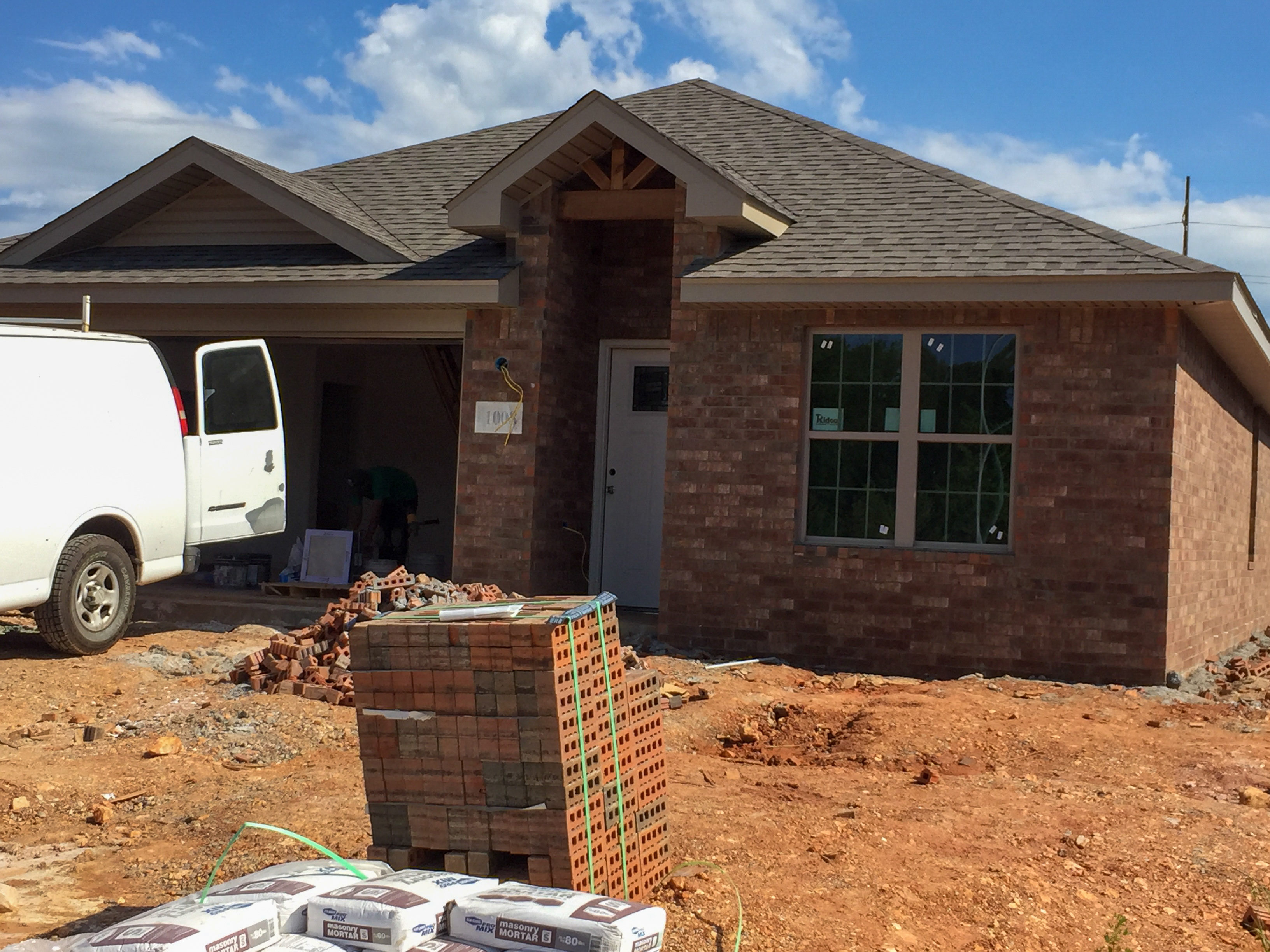 “We looked at several houses here in the Rogers area and we looked at a brand new house that served as a model home in a subdivision,” Oliver said. “We met with the builders and they said that was the way to go – to start fresh and clean out a brand new home.”

Oliver said the mission group closed on the house on July 23 and had an open house on July 28. TASC is in the process of finding suitable clients that will move in shortly after the open house. Oliver said the family unit will most likely feature a young couple with children or older siblings with little siblings. He said, at this point, he has no idea who the clients would be, but they will stay there for 18 to 24 months.

He said another church member donated $8,000 to Tapestry Home to do with as they please, so the group purchased a refrigerator, washer and dryer. He said they also bought a couch and chair for the living room.

“We also have a ton of stuff that has been donated,” Oliver said. “We are just getting a ton of free stuff from different vendors and a ladies’ sorority has taken on the kitchen, purchasing pots, pans, silverware, and small appliances.

“We have had different community support in helping to furnish the house in different ways. Just tons and tons of people making new friends and five churches working together. That has been a blessing beyond measurement.”

Dawn Spragg is an ordained deacon at Central United Methodist Church and is also a co-founder of TASC. The non-profit focuses on teen homelessness in Northwest Arkansas.

“When the collective group made the decision to purchase the home, we talked to them about the numbers and teen homelessness in the community,” Spragg said. “We discussed the relationship that we have with Springdale FUMC and it currently features a teen family with a mom, dad and an infant.

“That’s the model that we looked at and what we needed in our community. We had a donor willing to purchase the home and place young adults and teens in housing with the Tapestry Home.”

Spragg said she and her husband founded the non-profit 15 years ago. She said has been on staff at the church as one of the pastors for 12 years, including serving as the youth pastor for two years.

“Teenagers have always been the place I felt God calling me to serve,” she said. “There weren’t a lot of support services for teens in our community. So we founded TASC, and I have been working with them either part or full-time since we opened.

“I work with families and teens, providing mental health.”
Last year, TASC worked with 64 teens who were housing unstable. Either their families were homeless, or they lost a parent and didn’t have someone to live with.

“There are 2,000 children who are considered homeless and I don’t know how many of those are teens,” Spragg said. “That’s the most recent number, and it doesn’t include children living with friends, or what we call ‘couch surfers.’”

Spragg said the city of Rogers doesn’t have a lot of low-cost housing.

“We have a lot of working poor,” she said. 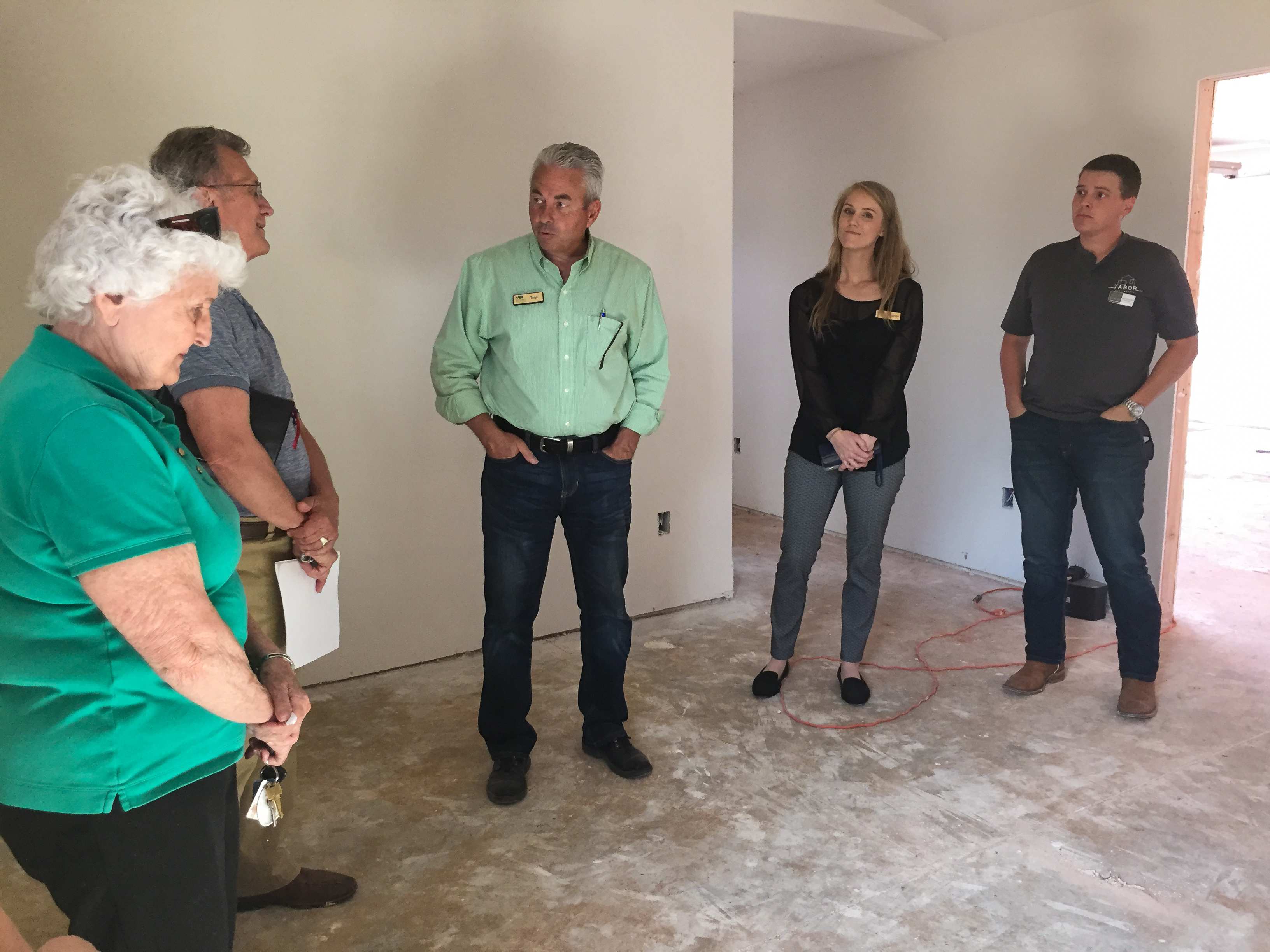 Volunteers survey the work that has been done so far to the Tapestry Home. The home shad an open house on July 28 and should be accepting its first residents soon. || Photo Provided by Tapestry Home

“They are earning minimum wage, and then a family has a death or divorce and the economic stabilization is cut in half,” she said.

“It creates an environment where they can’t afford housing or transportation, that kind of thing.

“It causes a lot of instability in housing and they suffer struggles in the family, including trauma, mental health or substance use – those are some of the key factors.”

She said Oliver and the Micah 6:8 ministry reached out to several agencies and several people in the church community to see what some of the needs were in the area.

“And then they landed on this one,” she said. “We have a partnership and we do the casework for the family in the home, and make sure they are following the guidelines of being in the home and have the resources and education they need.

“My agency makes sure all of that gets managed and Micah 6:8 makes sure the house is in order. We work with the family that is in there and they have volunteers to help them.”

Oliver said some of the guidelines for the residents include employment and paying a small stipend each month as if it were their rent. The money the leases pay towards the stipend will be put into a savings account and will be given back once the family moves out.

“They are also responsible for cleaning the house and making sure the house is left nice,” he said. “We are going to teach them how to balance a checkbook and simple maintenance, and parenting skills and counseling if they need it.

“Mostly, everything in life that so many of us take for granted. In the end, the four United Methodist Churches in Rogers, plus Andrew’s Episcopal, jumped into this and do whatever we can to answer the need of homelessness in Benton County for young adults.”

Spragg said the family has to be able to live on their own and cannot invite other people to live with them. She said they have to participate in the education and casework and TASC sets that up when they set the agreement. She expects the family to be moved in within 30 days of the closing.

The plan, and the hope, is by the end of the two years, the family has learned the skills needed to step out and be on their own as young adults.

“It is not likely that we would renew an agreement after the period of time, but the goal is to train these young adults or whoever goes in, to be self-sufficient and learn skills needed.”

Oliver said the small stipend will probably be no more than $300 and will give the lessees the impression that they are paying for living expenses and rent for the house.

“When they get to the end of their lease, they will have the money to help with deposits, that sort of thing, when they get out on their own,” he said. “We don’t keep any of their money.”

Only one family will be living in the house at a time.

“For example, the first family that went into Christopher’s House was two young kids, under the age of 20, with two children,”

Oliver said the long term goal is to, first of all, create enough enthusiasm to have the funding along the way, which includes earning grants, HUD money and other donations.

“This first model will serve as a catalyst,” Oliver said. “And if we see the success that we have this first home, hopefully, we can buy a second home or a third home. Ultimately, our goal is to have as many as we think we can manage.”