Planting the seeds of success: How a simple community garden grew into more than anyone imagined 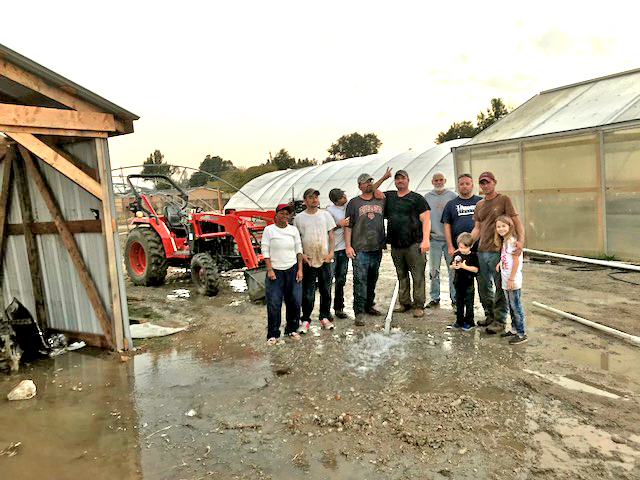 Residents and volunteers of Stepping Stone Sanctuary pose for a photo outside of the shelter’s community garden. || Photo provided by Jeff Weaver

Daniel Shuburte was homeless and a drug addict when he met Jeff Weaver with the Stepping Stone Sanctuary in Trumann, Arkansas.

“He helped me get off the streets and got me off drugs,” Shuburte said. “I stayed at the ministry for about eight months, and he helped me get the job at Aaron’s, where I am currently the account manager.”

Shuburte was one of the first men to come into the ministry to work off his community service hours. According to Weaver, he ended up becoming a resident.

“He has a huge success story,” Weaver said. “He came off the streets, and I begged the store to give him a chance and a job, and he has worked his way up to manager. He is our very first success story.”

Shuburte said, at first, it was a hard adjustment, coming off the drugs. However, he noted Weaver kept him busy, “instead of spending my days out, doing nothing.”

“It has meant a lot,” Shuburte said. “Without it, I wouldn’t be where I am today. I would still be on the streets. It means a lot to me.”

He thanked the ministry for not only his recovery but also his faith.

“Faith had a lot to do with it,” Shuburte said. “Being surrounded with those type of people, it really helped me. Knowing that there are people that want me to do better, it drove me to do better.

Stepping Stone Sanctuary, located at 912 W. Speedway, serves as a homeless shelter, food pantry and soup kitchen. It started as a community garden, but within a year, the shelter was built.

“It has grown into a massive thing,” Weaver said. “It has gotten unreal, to be truthful with you.”

About four years ago, the Arkansas Conference of the United Methodist Church challenged its churches to become more involved with the community as well as help reduce the number of hungry children in the state.

“The first thing that was said, ‘Let’s start a community garden,’” Weaver, who is the lead pastor at Trumann First United Methodist Church, said. “Immediately, our people jumped up, and in like three days, we had the city involved.

“The city donated basically a whole city block, where they tore down a bunch of houses, and they donated that for us to use as a community garden.”

Weaver said within a week, they broke ground and started planting a garden. He said the plan was to start small, but “we started big.”

“The first year, we handed out like maybe 1,000 pounds of vegetables,” Weaver said. “The need was so big, we built a little produce stand, and we would bag up the vegetables.

“People were lining up to get those bag of vegetables, and the line got as long as the whole block. We were running out of food.”

Mary Lewis Dassinger said Weaver’s ministry is more or less an off-shoot of the 200,000 Reasons Mission, in which she is the project coordinator.

The 200,000 Reasons Mission is an initiative of the Arkansas Conference of the United Methodist Church and began in 2014.

“When this initiative started, an estimated 200,000 kids faced food insecurity, and as of May, that number has been reduced to 163,700,” Dassinger said. “We love Jeff’s story, his heart and his compassion.

“He sees a need, and he meets it. He keeps working and has this energy that many people don’t have. He is really an inspiration.” 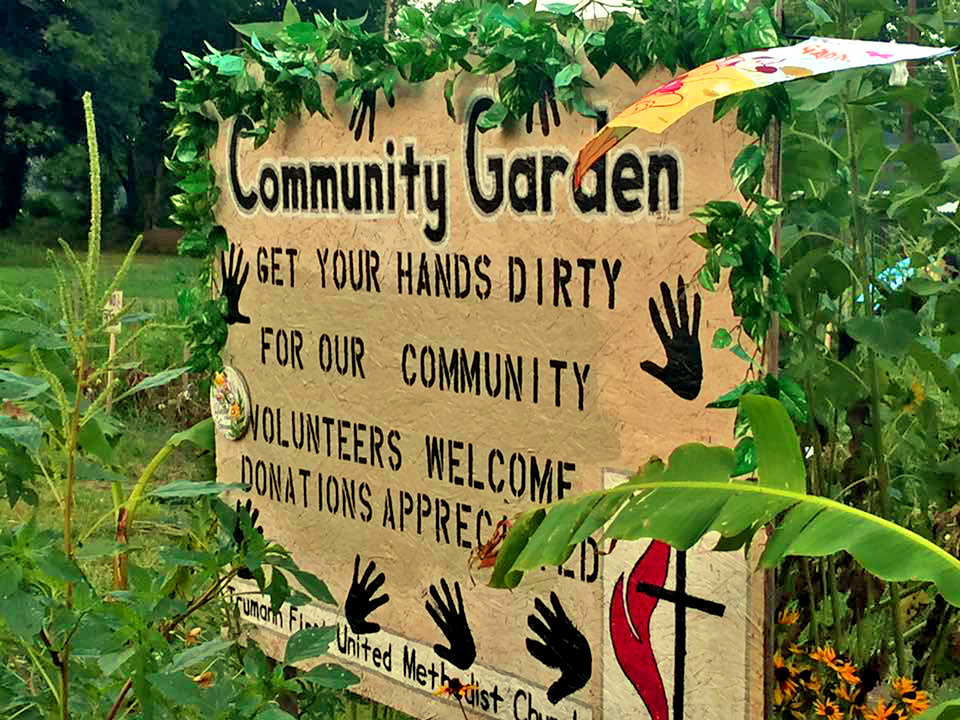 The sign marking the location of the Stepping Stone Sanctuary community garden, a ministry of Trumann First UMC. || Photo provided by Jeff Weaver

Bishop Gary Mueller with the Arkansas Conference of the United Methodist Church said Weaver’s vision was to care for the hungry and the homeless people in Truman.

“Feeding hungry kids is an important part, but the whole ministry is trying to deal with a much bigger issue,” Mueller said. “It just happens when people are open to God’s love and are headed the same way, we can do important work.”

Dassinger said Mueller was responsible for the initiative after wanting a common mission and having members put their faith in action to have a real impact in the state of Arkansas.

“Methodist churches in every county are doing something to help feed hungry children,” Dassinger said. “For some, it is just making a donation to the food bank or pantry, but for others, it is providing food for the weekend for students to take home in their backpacks. Some are offering community gardens, cooking skills, financial and budgeting skills.

“…Jeff is a bright star in all of that with the Stepping Stone Sanctuary, showing the impact that small churches can make in large ways.”

A year after opening the garden, Weaver became the chaplain for the Trumann Police Department, and while working with the officers, he got to see the need for the homeless.

“I actually found a tent city,” Weaver said. “We have a lot of abandoned homes in Trumann, and we had people sleeping in those abandon homes.

“We saw the need real quick to do something to help these people.”

Within two months after forming a committee with members of his congregation as well as people from other churches, Weaver found a building and opened a homeless shelter.

“We didn’t know how we were going to fund it; we were going on faith,” Weaver said. “We started working, and people started giving us donations. Columbia Forest donated all the plywood and lumber that we could possibly use to build new walls, and people gave us mattresses.”

This is the third year for the shelter and Weaver said while the numbers run up and down this time of year, the shelter can hold up to 60 people. Residents don’t have to pay rent, but they do have to attend church on Sundays and provide that day’s bulletin as proof.

“I think it is a great place,” Shuburte, who now serves on the ministry’s board, said. “If you take it seriously, and take Jeff seriously, he will help you. 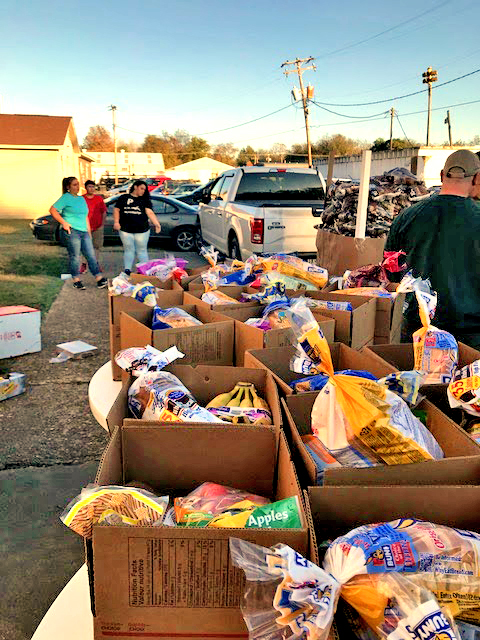 Produce is collected outside of Stepping Stone Sanctuary. Donations are used to supply food to residents as well as the ministries soup kitchen. || Photo provided by Jeff Weaver

“It helped me a lot. I had nothing. The Methodist church and some of the people in the community provided me with clothes, food, and work. They taught me work ethics and helped me get a job.

“I’m proud that I was able to be there. It changed my life.”

Weaver said so many people have jumped in to help them, including other churches in the area.

“I used to have to do all the pickups, but now we have church members going and picking up the food, and we have had a huge increase in our church attendance,” Weaver said.

Weaver is in his eighth year as pastor at Trumann First United Methodist Church. He now serves as the chaplain and a part-time officer for the Poinsett County Sheriff’s Office.

“I have never seen something grow and grow so fast,” Weaver said. “What we have acquired in three years has been mind-boggling — it grew too fast.

“We outgrew our finance; we have to hustle to get grants. Now we have recurring grants, and those are enough to pay our bills.”

Weaver said this was a ministry that was started by faith.

“We had no money when we started this,” Weaver said. “We just knew there was a need, so we prayed about it continuously.

“If this is your will, tell us what to do, and we will be your hands and your feet.”