A trip to the farmers’ market 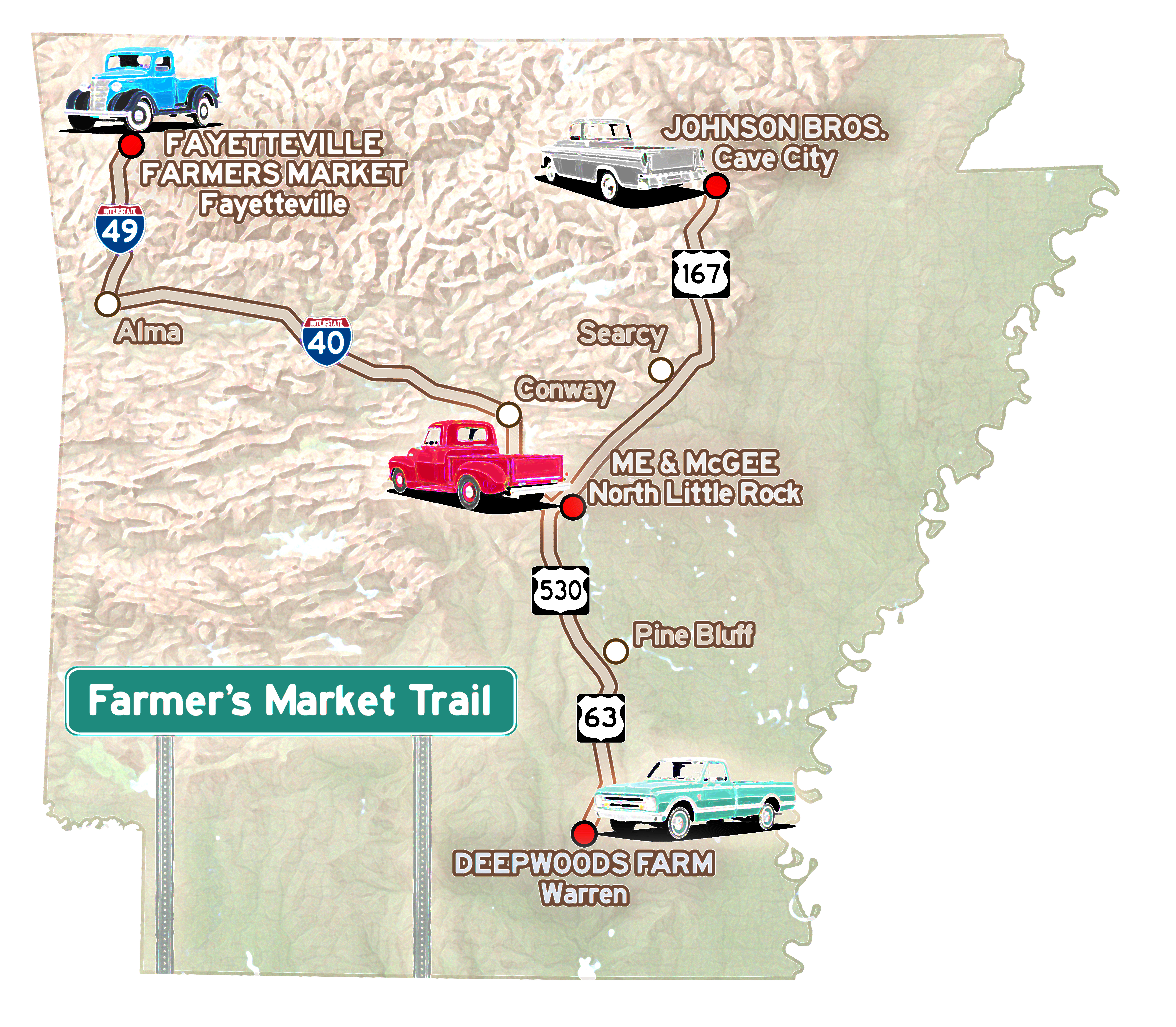 As a child, my grandmother took me on walks down Main Street in Blytheville to buy small, juicy tomatoes from an old man selling from a crate he held in his lap. She helped me pick peaches in a sprawling orchard not too far from there and I would eat them over the porch railing, honeysuckle drowning the steamy air.

My first job was working at a produce stand in Jonesboro. I would buy zucchinis ladies would bring from their garden and sell them to young mothers shopping for supper. Arkansas farmers helped raise me just as carefully and tenderly as they raised their crops. As an adult, I experience a deep, nostalgic thrill visiting my local farmer’s market. The Natural State boasts an ideal environment for cultivation of all kinds. Fertile soil, dense mountain forests, rivers and lakes, all make Arkansas the beautiful, natural haven it is. At the height of the summer season, our markets and stands are thriving under this sweet heat and bustling with local charm, communal dwelling places to appreciate the bounties of our Earth.

A few years ago, my grandmother moved to Texas. She insists I bring her local tomatoes when I visit. If you didn’t know already, tomatoes are an Arkansas staple. They are the state’s official fruit and vegetable, after all. In 1987, it was signed into law by former governor, Bill Clinton. Former state Rep. John Lipton who made the proposition said in his statement “the South Arkansas vine-ripe pink tomato has a taste, texture, appearance, and aroma second to none” and promised 20 lbs. of them to any of his colleagues who voted in favor of the measure.

Deepwoods Farm in Warren, Arkansas is one place to find these notable tomatoes among many other varieties. Deepwoods is owned by the Donnelly family who has been perfecting tomato farming for more than 60 years. They have an onsite farmer’s market, canning workshops, and offer the opportunity to try your own hand at tomato picking. Make sure to bring one back for grandma.

Saturday mornings in Fayetteville, Arkansas, are something of a great tradition. The Fayetteville Farmer’s Market is award-winning and entirely saturated in whimsy. Throw on your sunhat and get there early. Each stand in the historic downtown square bears testament to Fayetteville’s “funky” claim, offering anything from miraculously intricate hand-woven baskets to delicate, shell-pink mushrooms. Gorgeous, organic flower arrangements are abundant and there are always plenty of dogs to pet, homemade soaps to smell, and local musicians stringing along tunes for dancing children and adults alike. It’s an ideal southern atmosphere with a lot of quirks and a lot of quality. One, out of its almost 80 vendors, is Osage Creek Farms out of Green Forest, Arkansas. Their stand is run by the young, energetic couple, Kelton and Aubree Hays. Osage Creek specializes in grass-fed, grass-finished beef, free of antibiotics and hormones. Their cows are farm-born and raised, eating nothing but Arkansas grass from the pastures they are free to roam. Grass-feeding cows is a patient and more ethical process as it allows them to eat as they were biologically intended and reach a reasonable weight at a normal pace. “Grass-fed” is often a loaded term as it isn’t legally regulated. Arkansan consumers can rest easy knowing that when Osage Creek says “grass-fed,” that’s exactly what they mean. “They wouldn’t know what grain was if you hit them with it,” Kelton says. Aubree’s family has been in the business for years. Her grandfather started with only 80 acres after the Great Depression and today it has expanded to more than 1,000. Fayetteville’s unique atmosphere lends so many opportunities for locals to really show off, and show off they do.

In Northeast Arkansas, the tiny town of Cave City prides itself as “Home of the World’s Sweetest Watermelons.” The Johnson Brothers are third generation farmers from just outside the town. Phillip and Gary Johnson have been growing their entire lives. When asked about his decision to carry on his family’s watermelon tradition, Gary Johnson, the younger half of the namesake, laughed and said he “doesn’t have enough sense not to.” When their father grew ill in 1976, the brothers, then 13 and 25, took it upon themselves to tend the beloved crops. Now, they sell from a single stand in Cave City and people travel far and wide to buy their fabled melons. You might wonder, what makes them so sweet? Rich and sandy regional soil take partial credit, but the real secret is vine-ripening. The Johnson family takes great care to ensure each watermelon is picked ready to eat. They are selectively harvested at the height of their sugar content and begin their deterioration the moment they are plucked. With that in mind, distributing to grocery stores and shipping long distance is nearly impossible because of their limited shelf life, making them a truly local treasure. Cave City even hosts an annual festival honoring these legendary watermelons and their various growers in the area. Take advantage of these while you can, the season is beginning and they won’t be Johnson-certified delicious for long.

Me & McGee is a delightful little market in North Little Rock. Anyone who walks in the door is welcomed by their honorary greeter, Roxie, a sweet, brown dog who loves to visit. Roxie’s friendly “hello” is a total embodiment of the warmth at the heart of Me & McGee. The clever name may sound familiar. Janis Joplin’s classic, Me and Bobby McGee, sings the virtues of love, contentment and freedom. These ideas are not far off from the vision of Debbie and her very own Larry McGee. The husband and wife duo got started selling pecans from their orchard at a roadside stand in 2011. Now, they exist as a family-run marketplace and it’s, by no exaggeration, a bounding success. It’s an outlet for all kinds of goods including homemade breads, salsas, dill chips, and pickles just to name a few. Written on one of their chalkboards is the phrase, “you can’t buy happiness, but you can buy plants, and that’s pretty much the same thing.” It’s a tribute to their goal of keeping it simple and rejoicing in the small things.
When you shop Arkansas local, you can always count on a lot of heart, a lot of community, and a whole lot of fresh Southern eating.