The Malvern Historical Society, with a grant from the state of Arkansas, recently presented a forum about racism through history. The forum was held on the 100th-anniversary date of the lynching of Malvern resident John Henry Harrison in 1922. Harrison, a black man, was killed by a mob of 200 people on the courthouse steps. The mob was described in the newspapers as “orderly and quiet.”

During the forum, many other examples of lynchings in Arkansas were discussed and the chilling effects they had on black families in the state. Many psychological effects and generational poverty still exist today because of the fear they instilled. 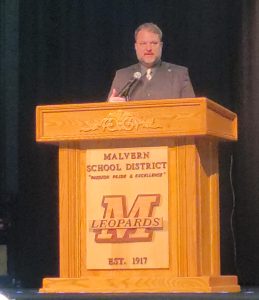 Dr. Guy Lancaster serves as the editor of the Encyclopedia of Arkansas. He is the author of several books on racial violence in Arkansas including, “American Atrocity: the Types of Violence in Lynching.”

Dr. Cherisse Jones-Branch is the James and Wanda Lee Vaughn Professor of History and Dean of the Graduate School at Arkansas State University in Jonesboro. She is the author of many articles and books including, “Crossing the Line: Women and Interracial Activism.”

Nathaniel Mitchell is a lifelong resident of Malvern and an expert in African American history in Hot Spring County. His latest project was compiling a digital collection of obituaries for African American people for the last 100 years.

Dr. Michael Washington is the Founder and Director of the Black Studies Program at Northern Kentucky University. Dr. Washington has led many workshops and seminars all over the world to help dismantle racism.

Rev. Troy Conrad is an elder in the United Methodist Church and an author for the Conference curriculum, “Having the Conversation.” He is currently finishing his doctorate degree.

Nearly 200 people attended the forum, including many history students at Malvern High School. Participants heard both presentations and held a question and answer session with the panel. For more information about how to get the Bible Study curriculum “Having the Conversation” here.