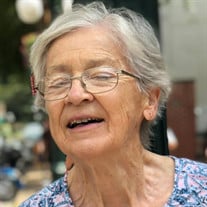 Norma Lou Hughes Hansford embarked on her greatest adventure to her heavenly home in September 13, 2021. Born July 2, 1941 she began her life in Bismarck AR, where she graduated class of 1959 valedictorian following with her attendance of Henderson State University where she met and married Harold Hansford. Together they began a life of ministry, service, wonder and adventure. Becoming parents to a daughter Deana and son Micheal. Embracing open hearts, open minds, open doors to its fullest, Norma(nana) loved all, continuously studied and explored and always welcomed anyone in need.

She is preceded in death by her parents Clifford and Hazel Hughes and Husband Harold.

She is survived by two sisters, Sharon Reed and Janet Gilbert; a daughter, Deana Nash and son-in-law, Darrel; son Micheal Hansford; three grandchildren: Tyler Hansford, Madelyn Wright and Zachary Bounds; one great grandchild, Brodie Dean Wright; three bonus grandchildren: Tykee, Kacie and Devin; and all who knew her as “Nana on the hill.”

There will be no service at this time.