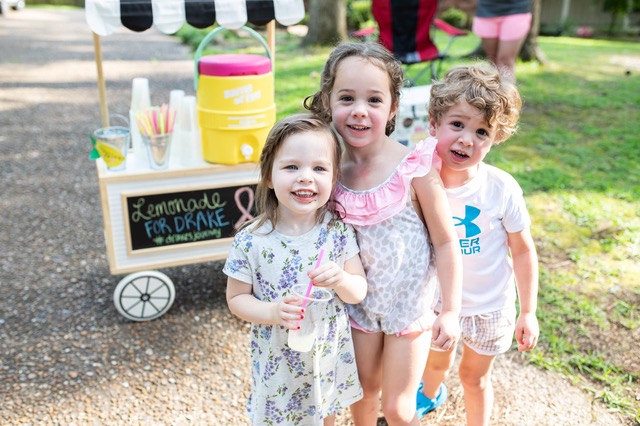 Alyce Read, Ellie Quick, Lawson Quick in front of Lemonade Stand for Drake. More than $1,200 was raised for Drake, who was recently diagnosed with acute leukemia.

When life gives you lemons, make lemonade! A phrase most of us are familiar with and a motto that has been lived out after a recent college graduate was diagnosed with acute leukemia. Drake Souter, 23 years old and a member of Greers Chapel United Methodist Church in Magnolia, Arkansas, was stunned by the news that he would be facing the greatest challenge of his life, just six months before he is to be married in November 2021.

It wasn’t long after the community heard of Drake’s diagnoses that people started pulling together in support of Drake and his family. Ellie and Lawson Quick, two of the youngest members of Greers Chapel UMC, took the opportunity to set up a lemonade stand in support of Drake. In a Facebook post to help advertise the event, Kathryn Quick said, “Ellie & Lawson have chosen to raise money to give a family very near and dear to our hearts, the Souters. Drake was diagnosed with acute leukemia and we want his family to not have anything to worry about other than getting Drake better so this is just a small way that we felt led to love and support our friends!”

On two of the hottest days of the summer, Ellie, 4, and Lawson, 3, set up their lemonade stand for a total of four hours to raise money for Drake. On the first day, they raised $200 and by the end of the second day more than 125 people showed up and a total of $1,200 was raised for Drake.

When Drake first heard of the Quick’s plans to set up a lemonade stand, he thought it was super sweet of them to think of him. “I had no idea it would raise that much money,” said Drake. “We have all been so heartfelt by what people have done. We live in the most giving community. It just shows how two little kids can make a difference,” said Kelli Souter, Drake’s mom. 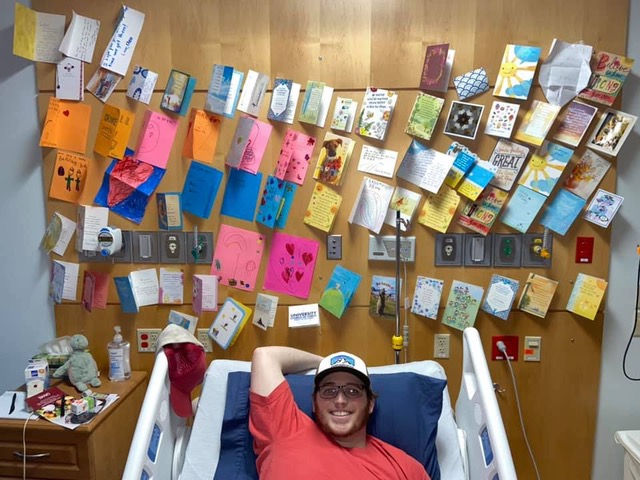 Drake Souter, surrounded by cards of love and prayers.

When the Rev. Dan Read, pastor at Greers Chapel UMC, first heard of Ellie and Lawson’s lemonade stand he was, “particularly proud that some of Greers’ youngest members are leading the way” in showing love toward others. They led the congregation and community in an act of generosity for a beloved family of the Magnolia community. What a testament to how two of Greers’ youngest disciples can make a huge difference, of how we can all make a difference in the lives of others.

As people continued to show up until the last second to grab a cup of refreshing lemonade, we were all amazed at the support of the community. Members of the First United Methodist CDC pre-school class even walked over with dollar bills in hand to give. “Drake’s going to be so rich,” said Ellie. In response to this, Ellie’s mom commented saying, “She’s not wrong, because Drake is rich in love and has so many people praying for him and that makes our hearts glad!”