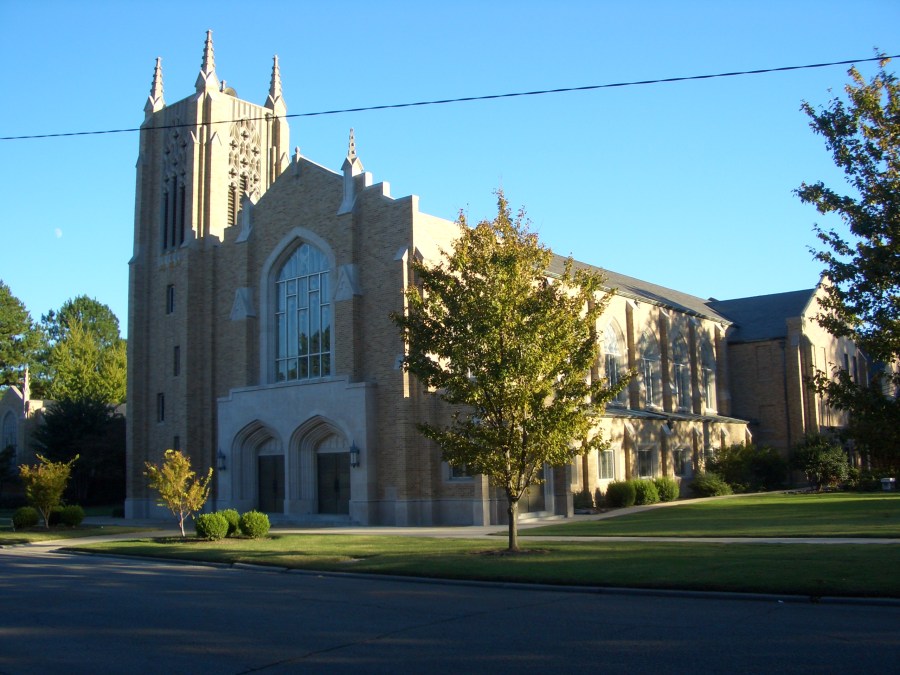 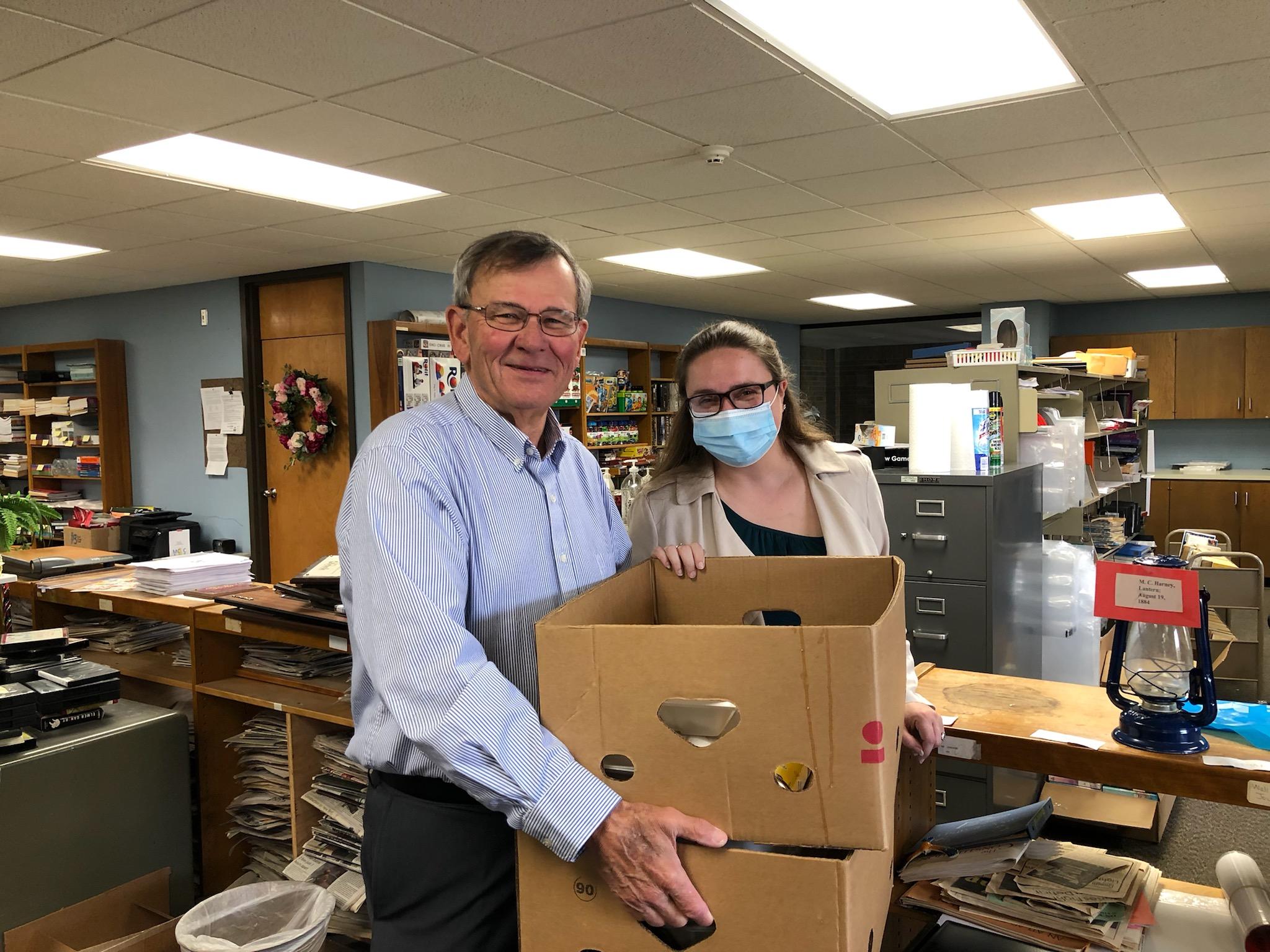 The Rev. Zach Roberts and a team of volunteers have been partnering with New Mount Olive Baptist Church in Blytheville to make sure kids doing school work at the local library are fed during the weekday. Pictured from left to right are Bill “Big Daddy” Kenner and Beth Roberts. Photo provided by Rev. Zach Roberts.

Summer is often one of the most challenging times for families with school-age children. Meals and learning opportunities for kids are drastically reduced during the summer months when they’re out of school. However, United Methodist Churches around the Arkansas Conference have stepped in to make sure kids of all ages are well-fed and well-read this summer.

Blytheville First UMC recently partnered with their local library in Blytheville to provide free meals to students who spend the majority of their day at the library using the computers for virtual classwork.

“These kids were showing up when the library opened in the morning, they were working and reading … using the library services until they closed, but they were not leaving all day and they were not eating,” said the Rev. Zach Roberts, senior pastor at Blytheville First UMC.

Zach said that his spouse, Beth Roberts, works at the Blytheville Public Library and sees these kids working non-stop on their assignments all day and not eating. He said that Beth was the one who told him about the need to provide food for kids in their community.

“And so what we did is we kind of recognized the cause and we put our heads together a little bit to try to solve it,” Zach said. “But the big solution was that there’s a church across town, a predominantly African-American congregation, called New Mount Olive Missionary Baptist Church. And I was fortunate enough that one of my church members, Bill Kenner, is very connected to the community, and Bill knew about the feeding ministry that New Mount Olive already had going on.”

Zach said that New Mount Olive has an ongoing ministry where they feed the community every day, but because the church is across town from the library, there was no way kids would be able to walk that distance for a meal.

So Zach and Blytheville UMC decided to bring the food to the kids.

“What we offered to do was take the food that was already being prepared at Mount Olive and bring it to the library,” Zach said. “So that these kids have something to eat and can do it in a safe place.”

The volunteers from Blytheville FUMC show up at New Mount Olive at 11 a.m. Monday through Friday. The food is bagged up and loaded into cars, and then delivered to the library for lunch.

Zach said that through this feeding partnership, he and the other volunteers at Blytheville FUMC have had good conversations with the members of New Mount Olive, and it’s not only been a way to provide for kids in the community but also to meet new friends and partner with a church that they might not have had the chance to partner with otherwise.

“For a predominantly White church and a predominantly Black church to be working together in that way across social and denominational lines is a great thing,” Zach said.

At Fairview UMC in Camden, the Rev. Kathryn Burchfield and volunteers at her church have found another interesting way to provide meals and learning for kids in their community as well.

“Our summer reading/feeding program is for kindergarten through first-graders in our school district. About 300 students will be getting a fun gift bag, with a very nice cookbook, cutting board, measuring cups and spoons, and an apron. The bags will also be filled with food to cook 10 recipes from the cookbook,” Burchfield said.

Fairview UMC’s approach to feeding hungry kids this summer is a two-fold approach, combining both a need to feed them as well as a learning experience where they can have fun while learning to cook.

The cookbook contains 10 recipes and the program is meant to last 10 weeks through the summer.

“We’re going to divide up those five recipes in the first load of food and then midway through summer, give them the rest of the food. They’ll be able to watch the recipe on Google Classroom to observe how it’s done,” she said.

The bags of food and supplies will be delivered to the kindergarteners and first-graders in the last week of school, Burchfield said.

She said the cookbooks were provided to the church for free by the University of Arkansas, and contain both English and Spanish cooking instructions. The items that will be placed in the bag were paid for by a recent 200,000 More Reasons grant that the church received.

Fairview UMC is also collecting gently used books as part of the 200,000 More Reasons Giving Book for Love initiative. Burchfield said they are planning to give away donated books at their food pantry as well as during their Vacation Bible School this summer.

Mary Lewis Dassinger, Project Coordinator for 200,000 More Reasons, said she is excited about the work that both of these churches are doing in their communities.

“Both churches are very creative in combining literacy and feeding ministries, which is what we hope to see. In addition, they are ensuring kids will have healthy foods to eat over the summer when access to food is harder for families who face food insecurity,” Dassinger said.

For both Blytheville FUMC and Fairview UMC, helping kids in their community came about in different ways, but the goal of both churches remains the same: to make sure no child goes hungry or misses out on an educational opportunity.

For more information on how your church can get involved in providing for children in your community, visit arumc.org/our-ministries/200k-more-reasons/.