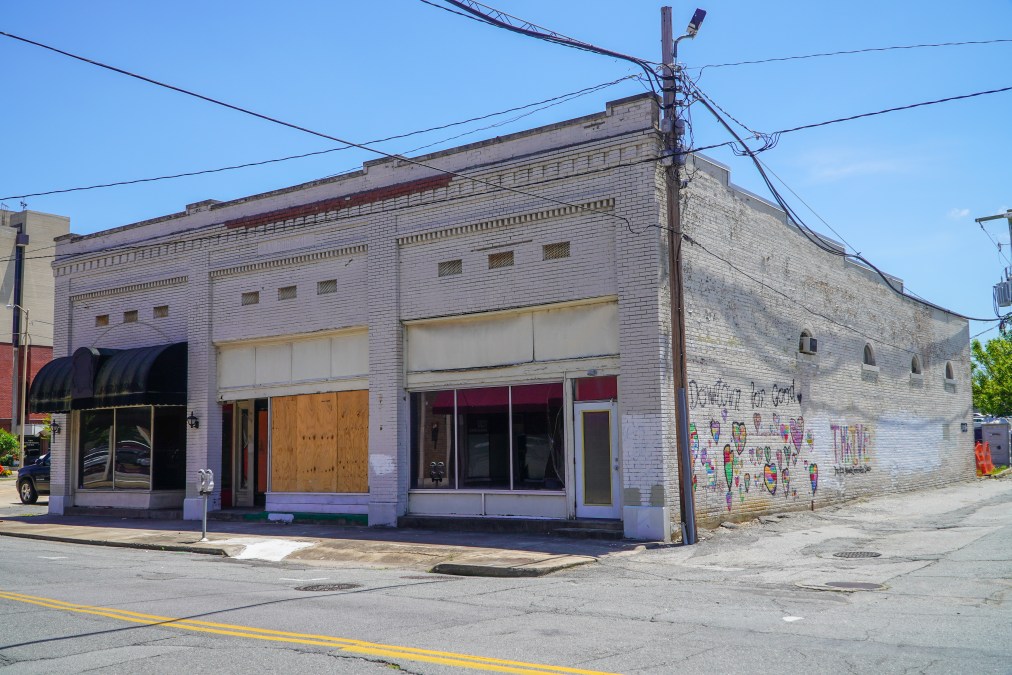 In 2014, First United Methodist Church Little Rock purchased the property at 307 W. Seventh St. At the time, the building was severely dilapidated – the structure was abandoned for several years after its last tenant moved out – and in serious need of interior and exterior renovation.

Over the years, the building – built in 1908 – has hosted a variety of colorful businesses and organizations, including a flower shop, a shoe repair store, a thrift shop, Easy Street Piano Bar, and most recently, Miss Kitty’s Saloon, a local gay bar that frequently hosted drag shows.

But when First UMC decided to buy the building, and the adjoining gas station at the corner of 7th and Center Streets, its aspirations were simple; purchase the property now and figure out how to use it for ministry later.

“At first, we thought we could tear the building down and add more parking for the church or build a parking deck with office space on top, but none of those plans really gained any traction,” said the Rev. David Freeman, senior pastor of First UMC Little Rock. 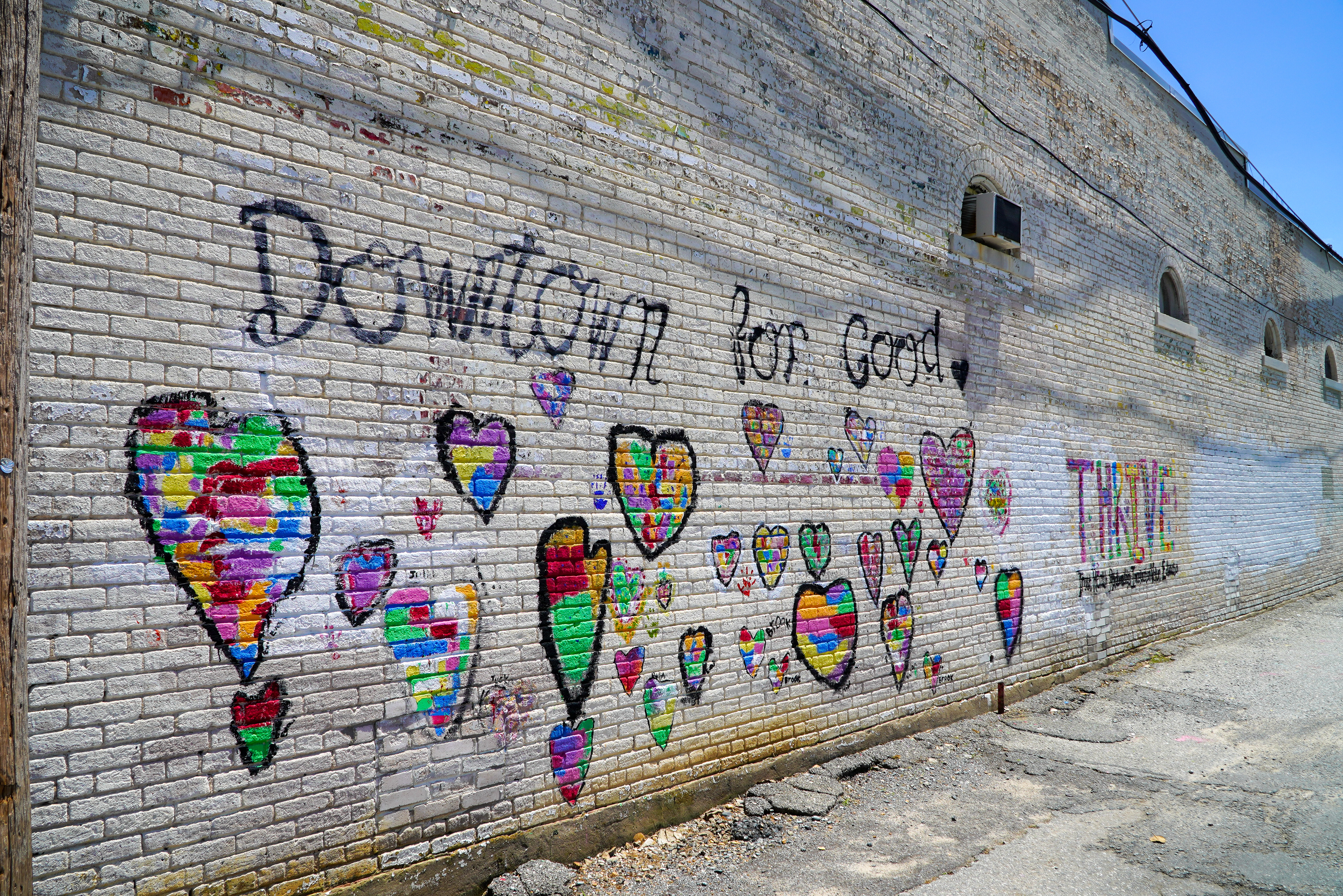 The side of the building at 307 W. Seventh St. The building, which has been vacant for years, will be the location of the new Lucie’s Place home office.
|| Photo by Caleb Hennington

“There were also some people at the time that were very adamant that we not tear it down. They believed the building had a lot of architectural integrity to the area. Seventh Street is known for its architectural variance, and if you just drive down Seventh, you’ll see every type of building. So, we decided to leave it for the time being.”

The problems with the building, however, weren’t just physical degradation; it was also suffering from more severe issues — namely, an asbestos problem in the roof.

“The roof leaked like a screen door, too. Water would just pour into the building when it rained.”

Freeman knew that if they were going to fix the building to where it could be usable again, it was going to cost some serious money.

Not only that, they would have to find an organization who was willing to move into the more than 100-year-old building; a difficult task when you’re talking about a building that’s nowhere near move-in ready.

Looking for a Tenant

Freeman said they opened the door to many different organizations who showed interest in buying the property at Seventh Street, but none of them felt quite right.

In the meantime, FUMC received an Environmental Protection Agency Brownfields grant from Pulaski County to remove the asbestos roof on the building. According to the EPA.gov website, “a brownfield is a property, the expansion, redevelopment, or reuse of which may be complicated by the presence or potential presence of a hazardous substance, pollutant, or contaminant.”

Now that the environmental hazards were corrected, the property had far more value to a potential tenant.

Freeman said around the same time they were working on fixing the roof, he received a call from Penelope Poppers, the former director of Lucie’s Place, a Little Rock-based homeless shelter for LGBTQ youth.

“She had been walking by the building at lunch one day and said ‘We’ve been looking to expand our offices and this building has been a huge center point for the gay community. This building would be a great location for Lucie’s Place.’”

Over the next several months, First UMC’s Board of Trustees and Lucie’s Place’s Board worked out a deal where the church would renovate the outside of the building, and Lucie’s Place would be responsible for fixing up the inside.

Lucie’s Place would have a 10-year rent-free lease on the building to use as their new office space. After the initial 10-year lease, they would be offered a dramatically reduced rate to rent the building.

Lucie’s Place Gets a New Director

The Rev. Johnette Fitzjohn, who took over as executive director of Lucie’s Place after longtime director and founder Penelope Poppers left the position in 2018, found out about Lucie’s Place by chance after viewing a listing for the non-profit on an online job board. 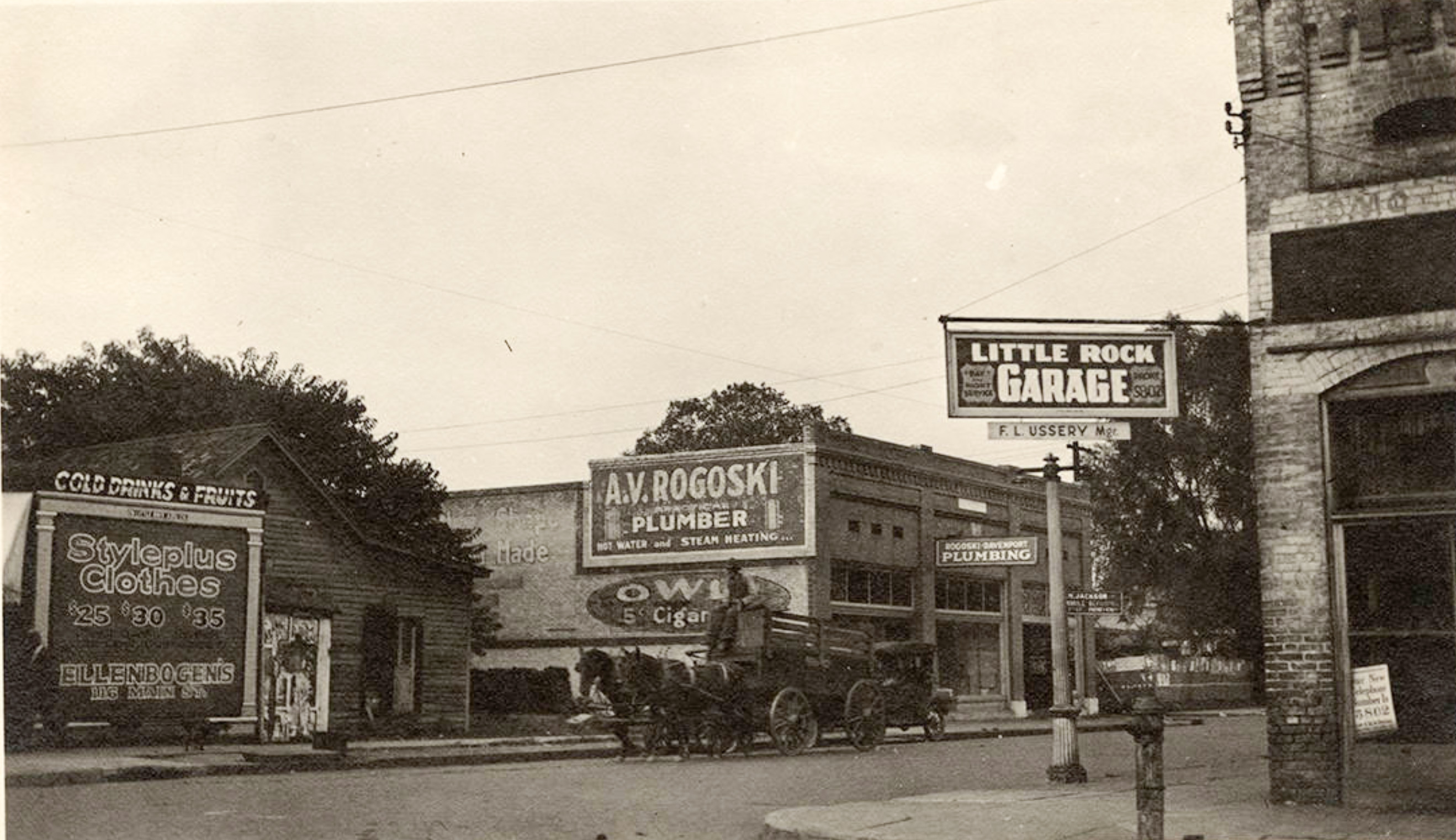 An old photo, taken somewhere between 1915 – 1925, shows 307 W. Seventh St. not long after it was constructed. The building is seen in the background, with the A.V. Rogoski Plumber sign on the side and front.
|| Photo courtesy of the Butler Center for Arkansas Studies.

A native of Liberia, Fitzjohn is an ordained elder in the United Methodist Church and previously served in the Greater New Jersey Annual Conference. She left ministry in 2012 for personal reasons, but worked extensively with youth, especially youth struggling with their identity, for more than 25 years.

Between leaving ministry and her job at Lucie’s Place, she spent time coaching churches on leadership development as well as working with abused and homeless young mothers at an organization called Project Hospitality in Staten Island, New York.

When Fitzjohn heard about Lucie’s Place and the work they were doing for homeless LGBTQ youth in Arkansas, she knew she had to be a part of it.

“I could not imagine my children being out on the streets because they were not accepted by my family or any child for that matter. When many of these young people come out, they do not have the support they need,” Fitzjohn said.

That rejection leads to higher rates of suicide in LGBTQ youth, Fitzjohn said.

According to data from The Trevor Project, a national organization providing crisis intervention and suicide prevention services to LGBTQ young people, LGBTQ youth are almost five times as likely to have attempted suicide compared to heterosexual youth.

Fitzjohn said that she gets a lot of questions from people asking her how she can work with an organization like Lucie’s Place when she is not a part of that community.

“I believe that, one, the greatest commandment is to love. And two, to accept people and to save lives. So if I can save just one life, that is what I believe in.”

A Coalition of Churches

In addition to the help that First UMC offered to Lucie’s Place, Freeman also managed to gather a coalition of Little Rock United Methodist Churches to apply for a grant from the United Methodist Foundation of Arkansas to help pay for the improvements to the interior of the building.

The coalition – made up of Asbury UMC, Pulaski Heights UMC, St. James UMC, and Trinity UMC – secured a grant of $75,000 from the Foundation. The grant will cover almost half of the cost of the interior renovations for the building and will go directly to Lucie’s Place.

The Rev. Carness Vaughan, senior pastor of St. James UMC in Little Rock, said that when he received a call from Freeman asking if he would help in this project, he didn’t know much about Lucie’s Place or the work that they did.

“But what I did know is that St. James has a real heart for the homeless in this city. We’ve been longtime partners with CanvasCommunity and have worked with the Under the Bridge Ministry.

“So, when David called … and asked if we would be a part of this, it was kind of a no-brainer for us. It’s the way we’ve been wired anyway.”

Vaughan said what has made so much of an impact with this project is the Foundation’s willingness to give back to the community.

“The grants that they have been able to give out have been so impressive. It’s a real blessing.”

Fitzjohn said the total cost of the project is close to $200,000, so the grant from the Foundation has been a huge relief for them.

“It makes me feel like the church that I’m a part of still has good people in it who would like to partner with us to save lives,” Fitzjohn said.

Right now, Lucie’s Place’s offices are located on the seventh floor of a corporate building on Spring Street and are shared with several other businesses.

The goal of having the new office space on Seventh is to have a place that feels safe and welcoming to anyone that steps through the front doors.

“The new space will be our offices,” Fitzjohn said. “We are in a very small space right now, and we sometimes see anywhere from 10 – 15 people daily at our drop-in center.”

In addition to the offices, the new space will also have room for a conference area, counseling rooms, a larger drop-in center that will serve as a welcome area and entertainment space, and other more private spaces for youth to meet with Lucie’s Place employees. 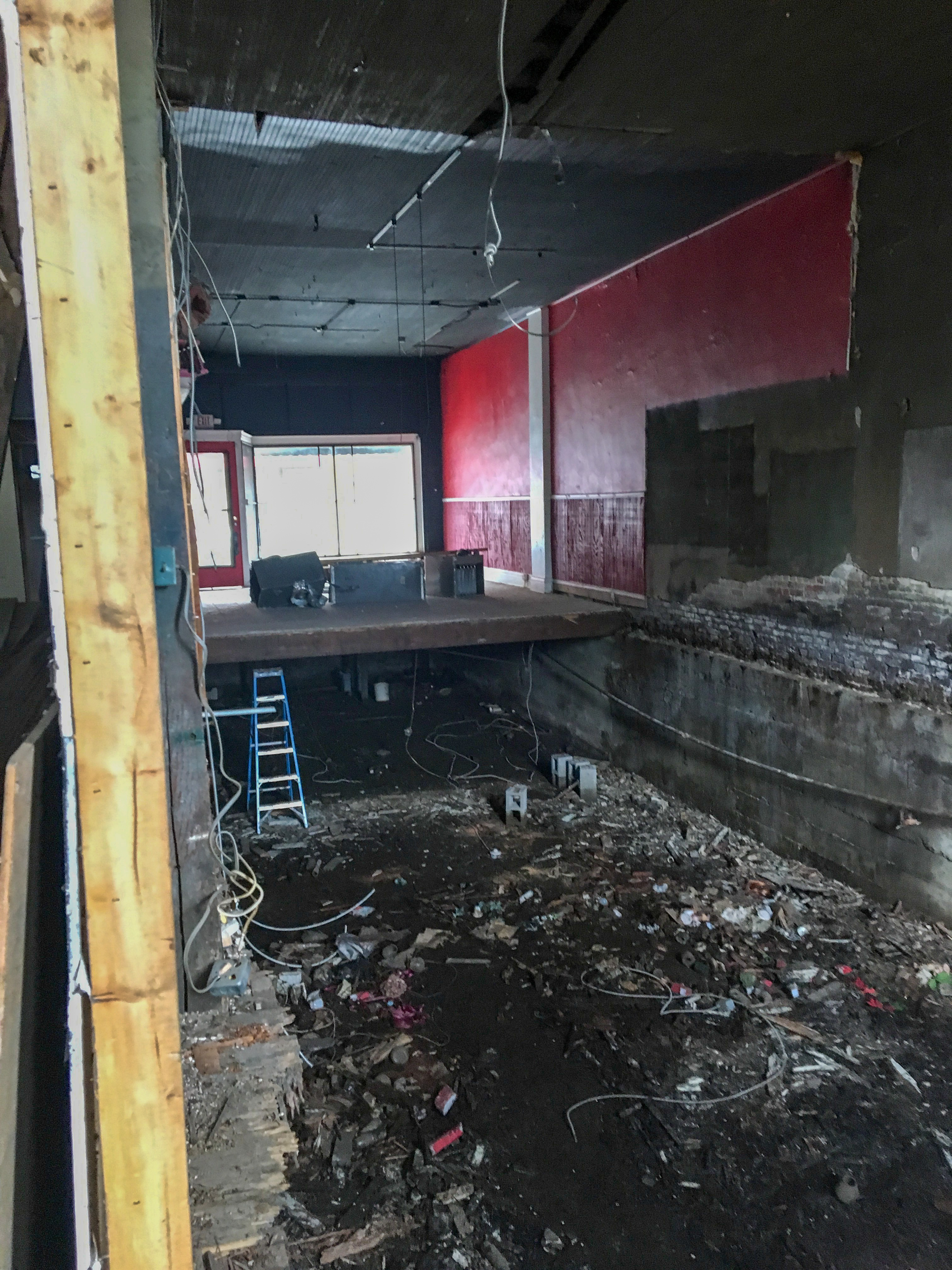 More interior shots show progress on the restoration of the building. || Photo provided by Lucie’s Place

They will also have showers and a grooming area. Fitzjohn said this is necessary because they have many youths who don’t stay at the Lucie’s Place residence but still need a place to freshen up and do their laundry.

Fitzjohn said since the area is so much bigger than their current space, there will also be room for a large event area, where other LGBTQIA groups across Arkansas can come to Lucie’s Place and hold gatherings or meetings.

“We want Lucie’s Place to be a center point, a meeting place for everybody.”

Ellen Yeary, a member of First UMC Little Rock and founder of Yeary Lindsey Architects, has been a crucial piece of the puzzle for getting the Seventh Street building ready for use again. 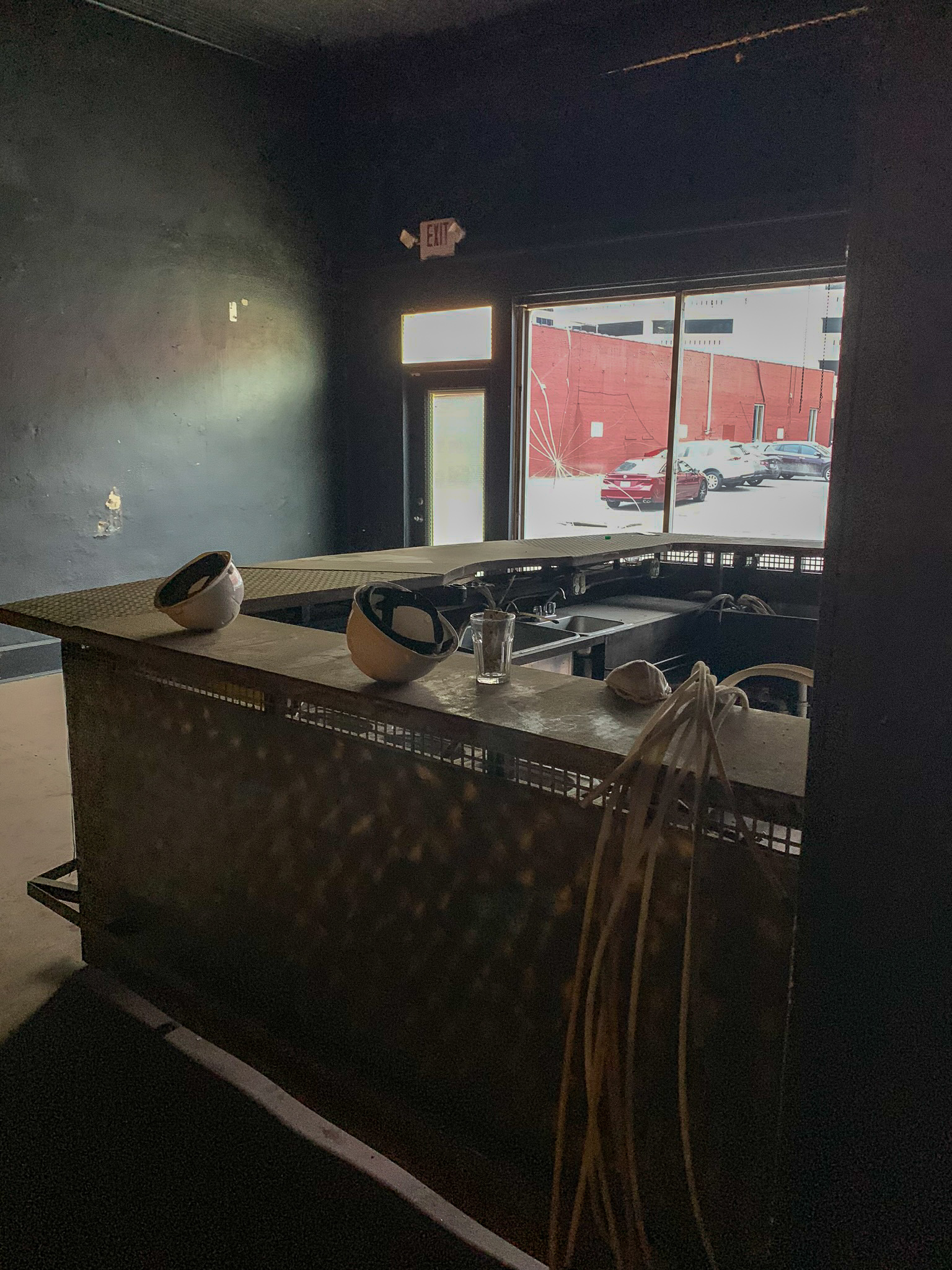 The front entrance of the building — facing the street — is where the new reception area will be located. || Photo provided by Lucie’s Place

“As a member of the church’s Board of Trustees, I was one of the ones really adamant about not tearing that building down,” Yeary said.

“I looked at this building with so much history and thought, ‘oh no, not another potentially wonderful place being torn down to park on.’”

As the Project Architect for the Seventh Street renovation, Yeary is responsible for drawing up the plans for the new space.

For the Seventh Street building, Yeary said the original layout of the building was divided up into three long, skinny areas. They opted to keep those spaces in place but needed to demolish other areas, such as a large stage that was left over from when concerts and shows were hosted in the building.

The front of the building will be used as a reception and home office area and will be opened up with large glass windows, making it warmer and welcoming for anyone who walks through the doors. The front will also have the conference center in the middle of the building as well as a large event hall on the building’s west side.

The drop-in center, the heart of Lucie’s Place, will be located at the rear of the building, making it easy for kids to come by after school, and read, do homework, or relax in a safe space.

If all goes according to plan, Fitzjohn said they will be moving into their new offices sometime in early fall 2019. Why This Work Matters

For Vaughan, Isaiah 58 is a critical verse in the Bible that he often goes back to when thinking about the church’s mission of caring for others who have been left to fend for themselves.

Yeary said the simple need to help others is what brought to this project. She hopes that the new Lucie’s Place office will be available for many years to take care of any homeless youth that walks through their doors.

Correction: The original article misidentified Rev. Johnette Fitzjohn as the person who contacted Rev. David Freeman about the building on Seventh Street. Penelope Poppers, former Lucie’s Place director, was the individual who contacted Freeman. The story has been updated with the correct name.