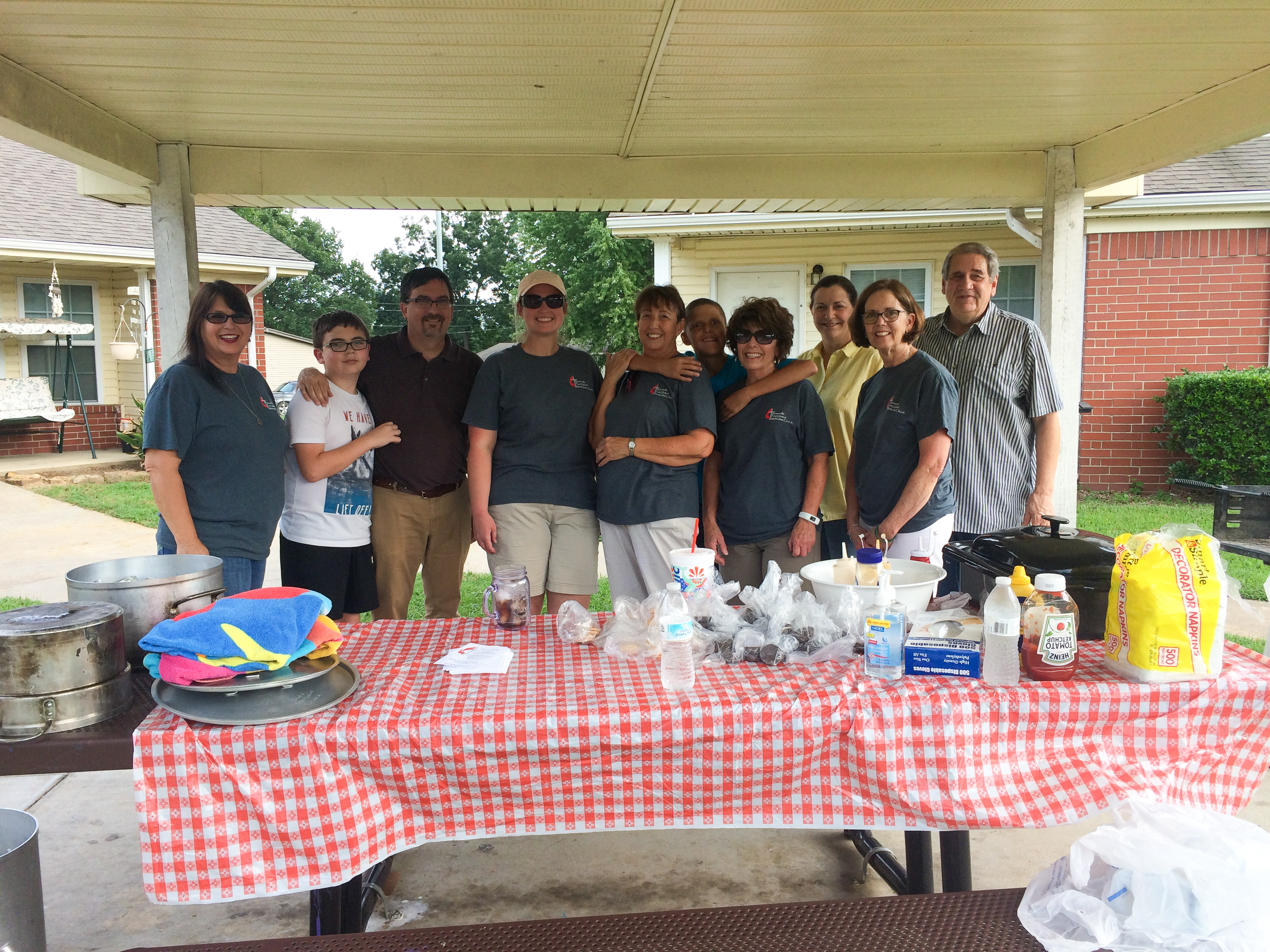 When the outreach ministry for Booneville First United Methodist Church first began, one lady showed up during one of the most challenging times in her life.

“She came when we were having the meal on the church,” Mike Smith, the pastor at Booneville FUMC said. “She was walking by because she didn’t have any transportation, and she engaged with us in conversation easily and she started coming to our church.

“As our relationship with her deepened, that’s when we began to discover more about her and her complicated background. We came into her life at a crucial point.”

Smith said the ladies of the church just surrounded her.

“We have helped her financially, got her set up a residential center in Rogers and got her counseling,” Smith said. “She actually told us, she would not be alive if not for this ministry because she considered taking her life.

“This ministry allows us to break through that barrier and it is an opportunity for us to contact people and give them an encouraging word that we would not have had otherwise.”

The Sharing and Caring Ministry, as it has become known, involves members of the church taking meals to certain housing areas, setting up tables, and engaging in conversations with residents of apartment complexes. Nikki Parker, a member at Booneville FUMC, is one of the lead organizers.

“If we only reach one person, that’s one more than we had,” Parker said. “I think anytime, whether it is on the church grounds, or at the apartment complex, or other areas of towns, where we can reach people, especially the kids — because we know they are the future — it is pretty special.

“When things are close to my heart, this is what happens.”

The ministry started with a hot dog type lunch at the church on the lawn, and it had some success. Smith said the church is located at the intersection of the two main highways that run through Booneville, so it was a good location, and they had some activity there. He said it allowed them to engage in conversation outside of the church, just with people walking or driving by.

Smith said they eventually moved out to an apartment complex that “has a lot of children and working families.”

“We knew one of the managers at one of those complexes, so we discussed coming and offering lunch,” Smith said. “We would park our church van near one of their pavilions and serve hot dogs, chips, cookies and drinks.

“It was just a great opportunity to engage in conversation, by talking to the adults there and hopefully encourage them to visit the church because of our ministry.

“Our main objective was to get out to the community and let people know that we care.”

“Our church has always had the reputation of being an open and friendly church, with a very strong prayer ministry that reaches to people outside of our church, when we know about them,” Parker said. “I just felt like we needed to get outside the church and we felt like this was a way to give back and get out into the community.

“We never did it with the anticipation that it would cause people to come to church. That was never the goal. Our goal was just to get out into the community.”

The ministry has now moved from the apartments to a local neighborhood. Smith said one afternoon, they parked the van, and visited with people who were out in their yards. He said they had some great success with that, as people would come and engage in conversation and hang around the van.
“We would talk and pray with some people, and it just became a real time for us to touch base,” Smith said. “We have eight to 10 people that are currently involved that are going out and more than that helping us prepare, or give money to help buy the food.

“We don’t budget the ministry; it is self-sustained. It allows our whole church to be involved.”

Parker said she has several school teachers that are involved in the ministry and a juvenile probation officer that has seen the results of kids not having the support that they needed from their community or family and went down bad paths.

“All these ladies are a big part of our ministry because they want to help,” Parker said. “Our church is very supportive of any ministry that we try to do. Some can’t go out with us, but they can help us at the church as we prepare food, or support us financially.

“I think that’s because they believe in what we are doing. It gives the church body several avenues to support this ministry.”

Parker said they are currently gearing up to start the ministry again, after taking a break this winter. She said they are trying to determine if other areas need to be targeted because they don’t want to be tied at one place all the time.

“There is a possibility for us to do more than we are doing now,” Parker said. “We may need to get a second place and alternate trips.

“I don’t know if we could get a second group together, but our church has always been so supportive, and we have had lots of people that come and help.”

She said they have good fellowship bagging up cookies and putting the drinks on ice.

“That was a good opening to get the kids, and that was the primary target,” Parker said. “But now we are seeing a lot of adults join us as well, so we just keep on trying.” 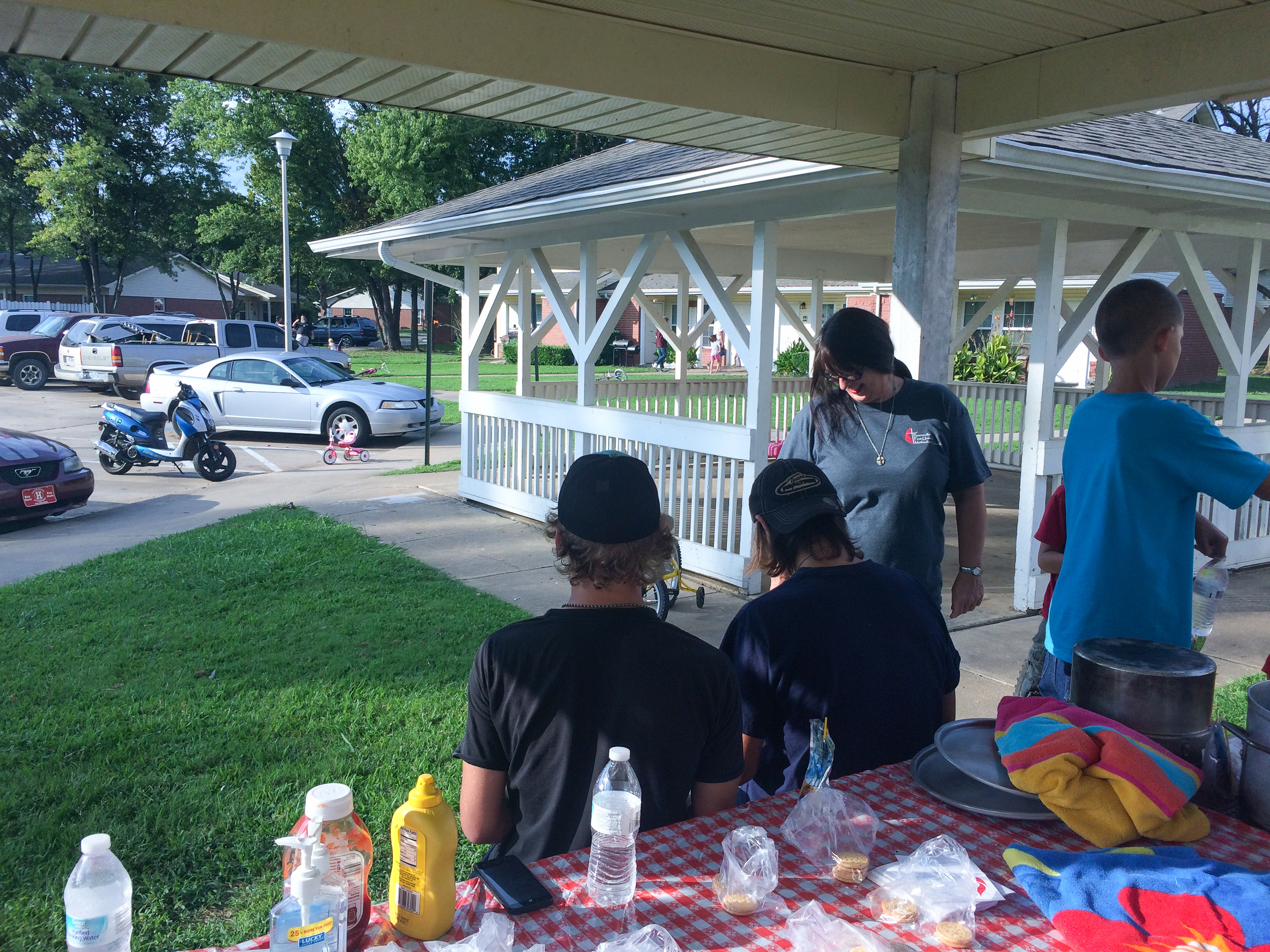 Smith said they are hoping to expand the ministry, which will include more nutritious meals such as sandwiches or a hot meal.

“We would fix it at the church, and put into carryout boxes and deliver them to the apartment complexes — something more sustainable,” Smith said. “When we first started, we really didn’t promote it a lot, but we are looking now to have a regular schedule every week.

“So when that day rolls around, people will know we are there. We are meeting within the next few weeks, to get back out there by the time school is out and take the ministry to the next level.”

Smith said one of the reasons they moved away from having it at the church is because people are more comfortable at their own turf.

“It is much easier to have a conversation, and it allowed us to reach more people in a much more relaxed environment,” Smith said. “We go back and see the same people, and we knew them by name and the issues they are having.

“We are taking the church out into the community.”

Smith said one of the main things he has seen through this ministry is “acceptance.”

“We see barriers being broken down,” he said. “Barriers that were put up because of expectations from people that are in the community.

“We had people, who started this, who were a little apprehensive and we saw those barriers being broken down. We are seeing God work and conversations happening.”

“We have seen barriers on both sides of sharing the gospel being broken down in the community, and we see the church being a part of their life,” Smith said.