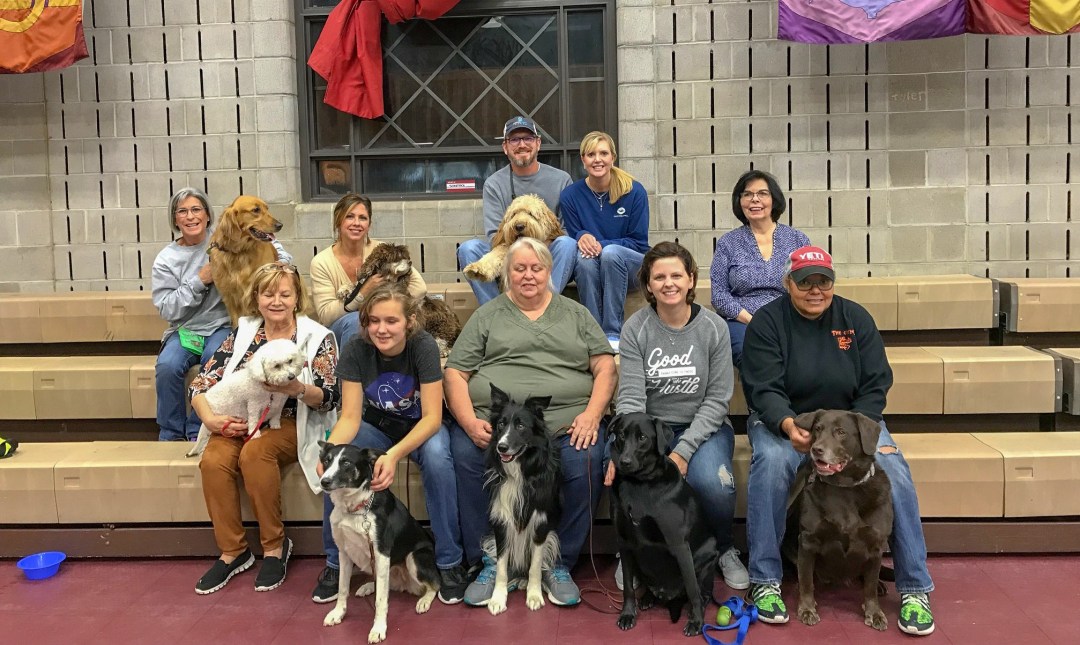 When the idea for a therapy dog ministry came to Pulaski Heights United Methodist Church, it took the church completely by surprise.

“None of this was planned; we just called it a God thing when it happened,” said Gayle Fiser, the volunteer Outreach Coordinator for Therapy Dogs International Chapter 255 of Arkansas.

Gayle’s husband Paul – a retired math teacher from the Little Rock School District – was out shopping one day, more than 11 years ago, when he happened to run into a former colleague whom he hadn’t seen in a decade. The friend mentioned that she was now doing therapy dog training, and if Paul ever wanted to get his dogs certified as therapy dogs, then she could help train them. The Fisers had recently purchased two Cavalier King Charles Spaniel puppies.

A week later, Gayle was in a meeting with the Rev. Betsy Singleton Snyder, who at the time was serving as a pastor at Quapaw Quarter UMC in Little Rock, where Gayle attended church.

The two were discussing a church member whose dog had recently died and how the church was able to make a pet food donation in the dog’s name to someone who needed help buying pet food. 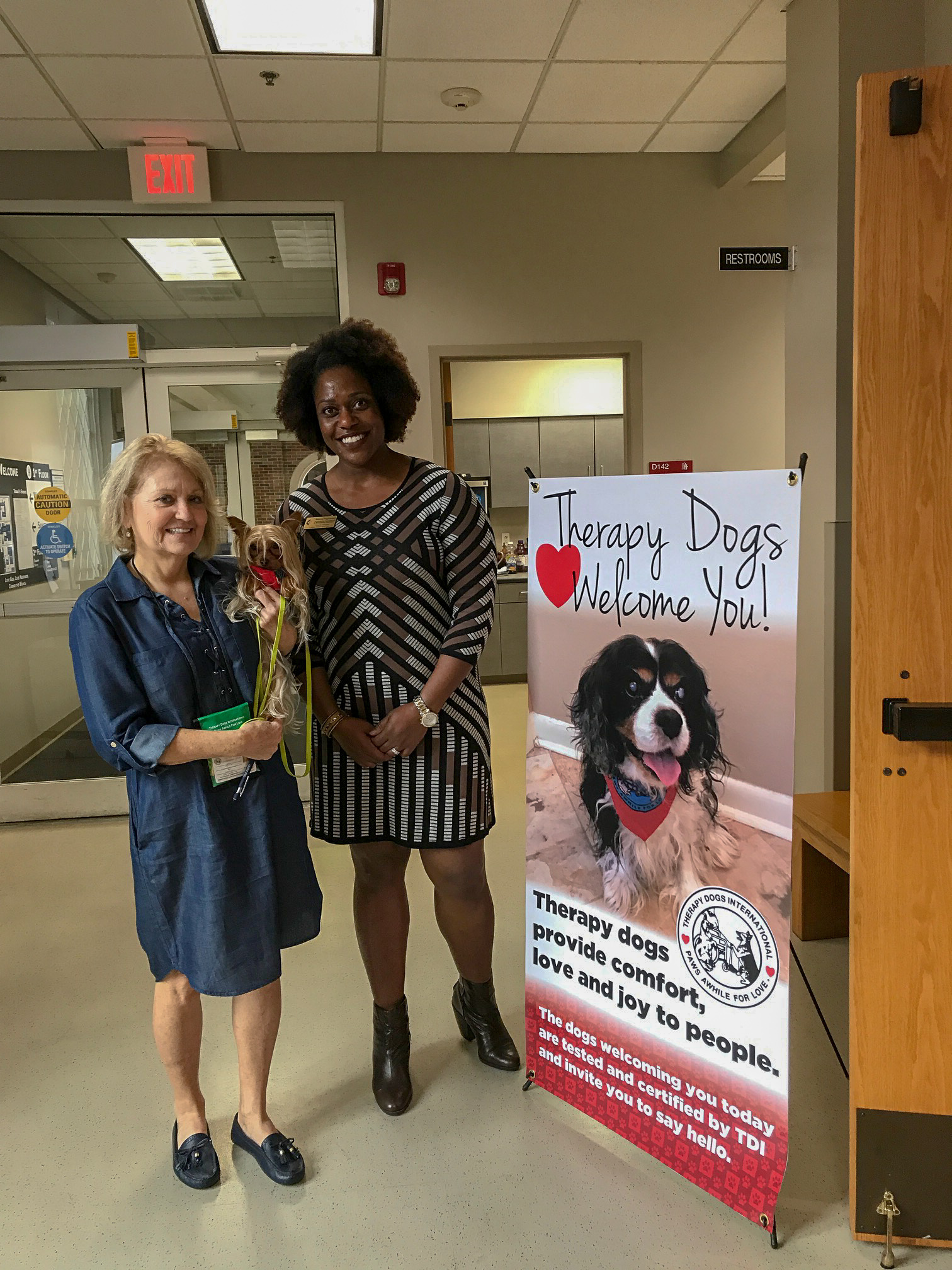 Dianne Hocut (left) with her dog Bart, a Yorkie and the smallest therapy dog in the group, and Stacey Hightower, Hospitality Coordinator & Welcoming Assistant at PHUMC (right).

“I had mentioned how much I loved that we were able to do that for someone through our pet food ministry,” Gayle said. “And then Betsy said ‘oh, speaking of dogs, I was in a meeting last week and someone had mentioned that it would be great if we could get our dogs certified to be therapy dogs so we could go visit the nursing homes around here,’

Soon after, the church began offering certification training for therapy dogs through Therapy Dogs International, one of many organizations that helps to train and certify dogs worldwide. Gayle’s Spaniel puppies were two of the first dogs to go through the Quapaw Quarter therapy dog training.

A few years – and a few appointments – later, Singleton Snyder was serving at Pulaski Heights United Methodist Church when the idea for a therapy dog ministry came up once again.

This time, she knew exactly who to ask for help.

“That was one of the first things I wanted to do when I got here,” Singleton Snyder said. “I called up Gayle and said ‘I know we want to do therapy dogs here. Would you be willing to help?’”

Training to be a Therapy Dog

The first step for a dog to become a therapy dog is to receive certification through Therapy Dogs International.

Therapy Dogs International (TDI) was founded in New Jersey in 1976, with the exclusive goal of training dogs and their handlers to be beacons of comfort for nursing homes, hospitals, or any other area where a therapy animal is needed.

There are no specific breed requirements for a dog to be certified as a therapy dog, and dogs from all different backgrounds – both purebreds with pedigrees and rescue dogs from shelters – can go through the certification training. 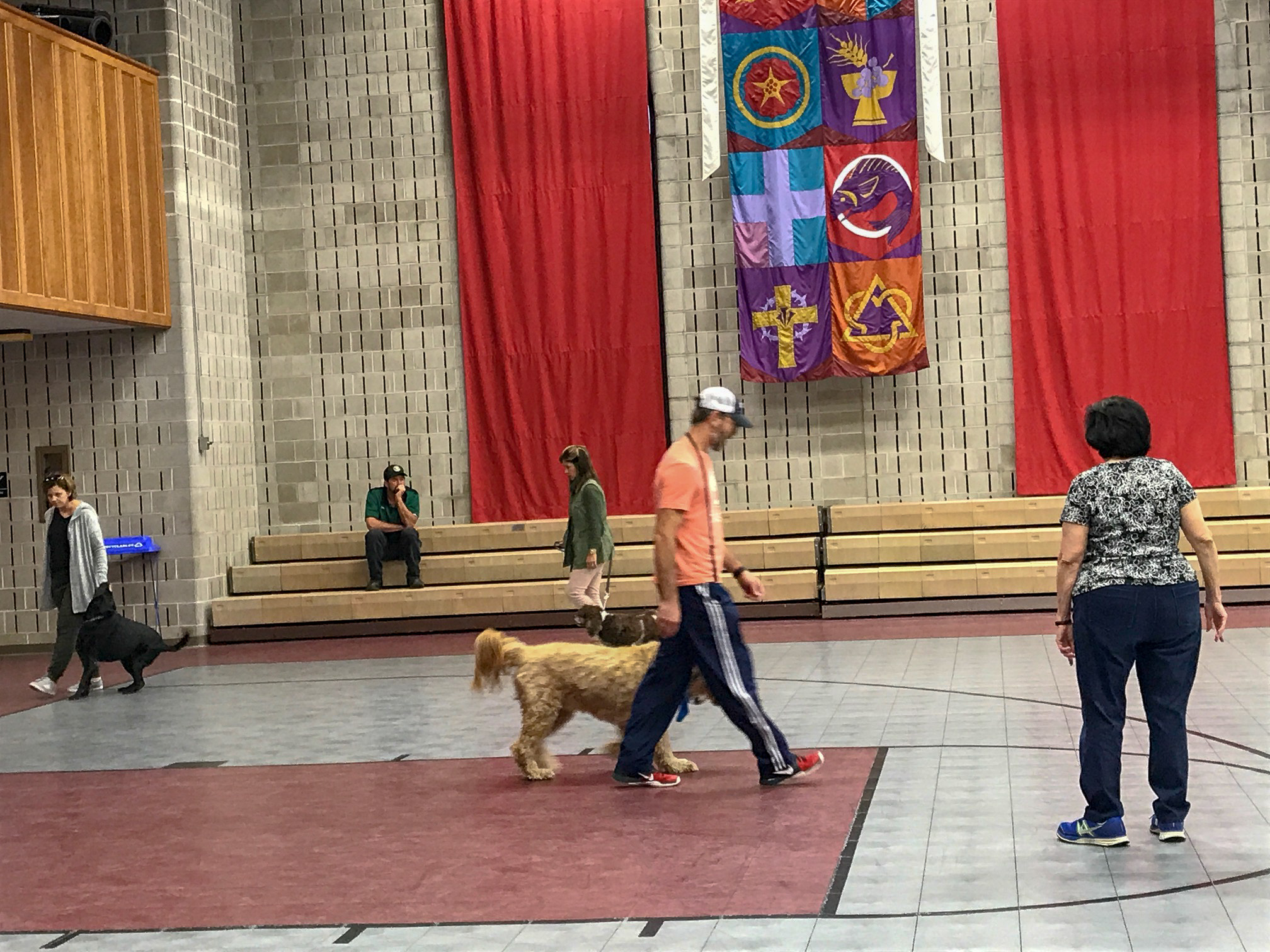 “The only requirement is that they are not aggressive dogs and they have to be at least one year old,” Gayle said.

During the spring and fall, dogs and handlers who want to go through the therapy dog certification training can come to the Pulaski Heights UMC campus on Woodlawn Drive in Little Rock for a 7-week course, led by a professional dog trainer. The dogs are trained in the church gym and classes are free for anyone who wishes to go through the training.

After completing the training, the dogs receive an ID badge and a bandanna that they wear to let people know they have undergone certification training. Handlers also receive a necklace with an identifying badge. The dogs are TDI certified dogs and aren’t specifically stationed at PHUMC, but can be sent to many different places that need their services, including churches.

Gayle said this type of training is usually hundreds of dollars, but by offering it for free, from a professional trainer that volunteers her time, they can reach more people in the community who want their animals to become certified therapy dogs.

Four-Legged Friends in the Sanctuary

But what role can a dog play in the sacred space of a church service?

“I think around this time of year – the season of Advent – when we have a lot of guests and people who might feel intimidated by the church, having the dogs greet them at the door makes them feel a little more comfortable.”

Singleton Snyder thinks having animals at church also lets people know they consider dogs a part of the family as well.

“Even your furry family members are welcome,” Singleton Snyder said. “If someone hasn’t been to church in a while or thinks church is a place that you have to segregate some of your family from, like your dog, then they might be surprised seeing all of these dogs greeting them at the entrance to the sanctuary. 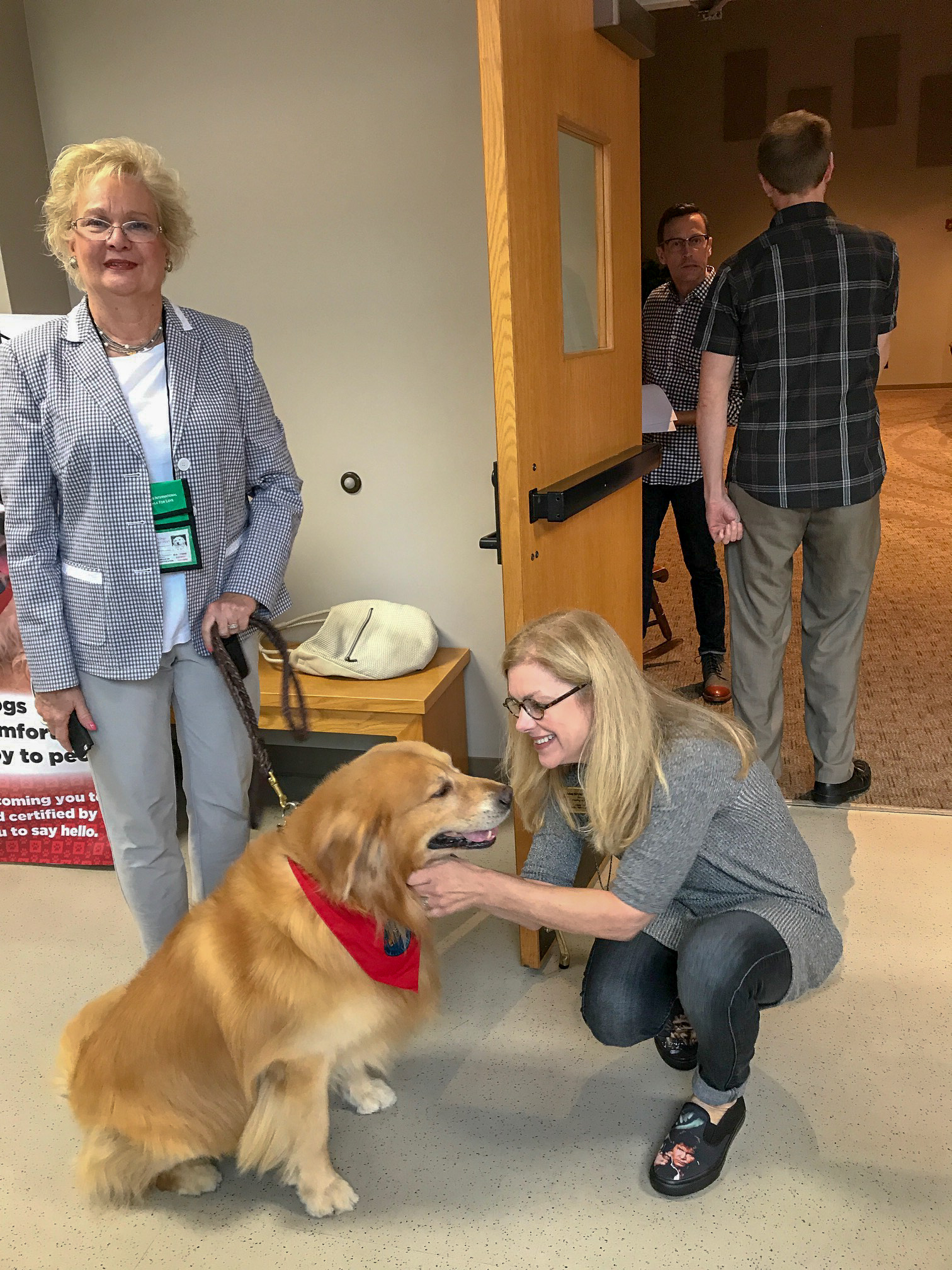 “We want people to know that their pets are just as valued in God’s creation as people. It sends a signal of welcoming, in a different way.”

Gayle said that the people who have signed up to be greeters at the door aren’t always United Methodists or even Christians.

“They might be Baptists, or they might be Episcopalian or Catholic. We even have people who have been hurt by the church in the past and atheists.

These people don’t always stay for the church service, but they’ll sign up to greet people entering the sanctuary,” Gayle said.

Singleton Snyder thinks she has an idea for why these people are signing up to greet.

“I think the reason they’re coming is that they care about people. They care about animals. They feel like they are doing a service for people. And who’s to say what God is doing with that person?”

Recently, the therapy dogs were present during Pulaski Heights’ Blue Christmas service on Dec. 14. Blue Christmas is a solemn and reflective service for those who have gone through difficult times – whether that be the loss of family, financial burdens or divorce – and feel that joyful Christmas celebrations are a painful experience.

The dogs were able to be at the service and comfort those who simply needed a soft bundle of fur to cry into.

The Therapy Dogs are also a big part of the Helping Hands Respite Care Program at Pulaski Heights.

The program — which offers care for seniors with dementia, Alzheimer’s and other care needs — is the perfect place for a dog’s love, according to Helping Hands Coordinator Beverly Villines.

“Many of the friends who attend our Helping Hands Respite Care Program have had dogs of their own and warm up easily to the dogs who come to visit,” Villines said. “When one of them arrives in somewhat of a ‘blue mood’, upon seeing the therapy dog the person visibly changes.

“I believe the therapy dogs have a way of knowing who needs them the most on any given visit.”

For the future of the therapy dog ministry, Gayle and Singleton Snyder have some exciting ideas planned out for 2019.

The United Methodist Church of the Resurrection in Leawood, Kansas – one of the largest United Methodist congregations in the United States – hosts a Leadership Institute every year. Its goal is to bring together church clergy, staff, and volunteers and train them to make disciples of Jesus Christ and strengthen the local church.

“They not only have a therapy dog ministry but they do other types of pet outreach as well, like classes teaching children how to behave around pets that they don’t know, and visiting different shelters in the area to see the animals that are housed there. 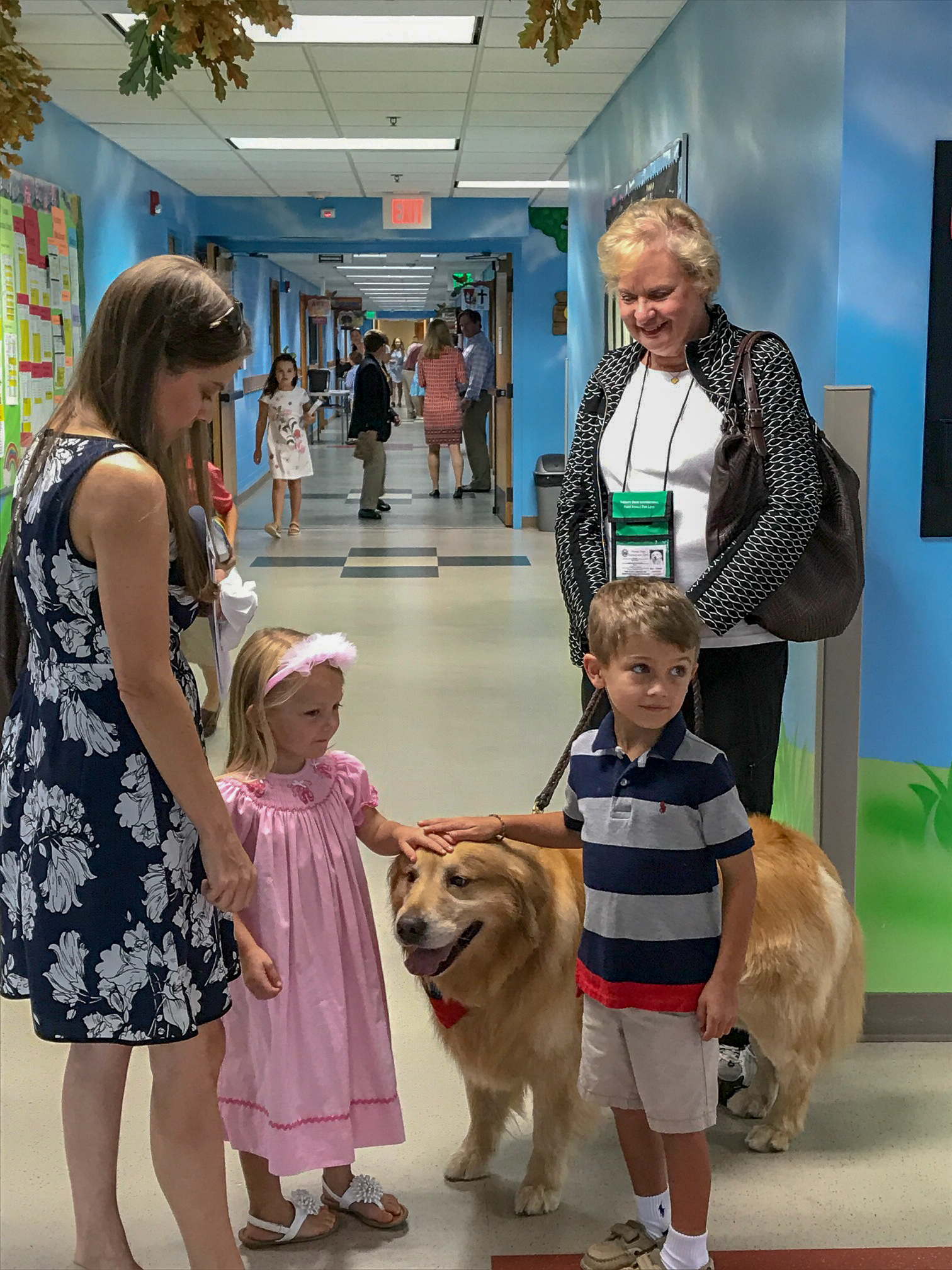 Pam Turner (right) with her dog Flare and Michelle Justus (left) and her children.

“So when we were together, we just couldn’t talk fast enough about our different ideas for pet ministries,” Gayle said with a laugh.

Gayle has also submitted a proposal to the leadership at COR to potentially teach a pet ministry workshop at the 2019 Leadership Institute.

“This workshop could be related to discipleship, missions or hospitality. Because it’s really all three.”

“I’ve always had dogs. We have three dogs at our house now. And I was the first person to do animal blessings here in the ‘90s. So finding ways to minister to people with pets was always my vision for ministry. And as time has gone on, it’s become even more clear that our pets are part of our families,” Singleton Snyder said.

Gayle agrees and believes that pets have a lot to teach us.

“I think that because dogs offer unconditional love, they help us model that behavior, and we should be following their example. They are accepting of all people, no matter what” Gayle said. “We have a lot to learn from our dogs.

“I believe there is a lot of healing power in fur.”