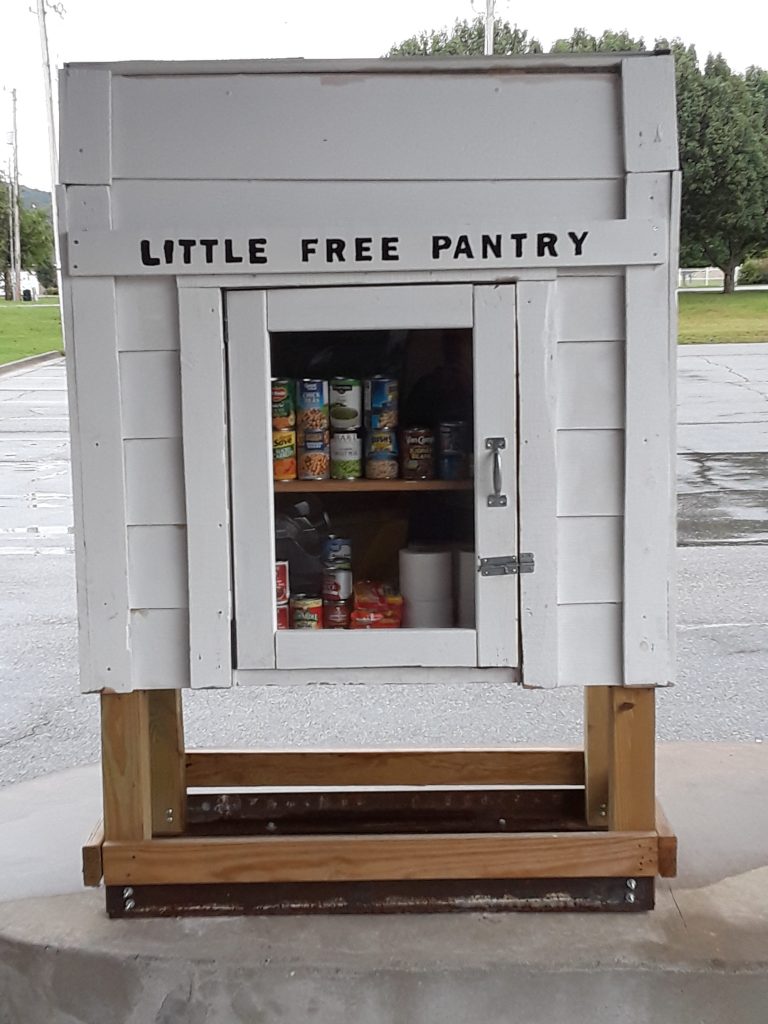 The Little Free Pantry blessing box provides food and other supplies for the community in and around Farmington. It was constructed by the Farmington High School FFA based on designs for a chicken coop that they had previously built. || Photo provided by Farmington United Methodist Church

Every act of kindness – no matter how large or small – has the potential to impact those in need of a blessing in ways that are unpredictable. In the case of Farmington United Methodist Church and their Little Free Pantry, the blessing arrived in a manner that surprised the congregation.

The Little Free Pantry is Farmington UMC’s version of the blessing box. Blessing boxes aren’t a new concept; they’ve been around, in one form or another, for many years. Typically, these boxes are similar in size to the small community libraries – sometimes known as little lending libraries – found on sidewalks and in front of neighborhood parks.

Inside the boxes, people place items like food, blankets, diapers, money, and sometimes even clothing. These items are free to be taken by anyone who needs them, and takers are also encouraged to leave something in the box for the next visitor if they have the means to do so. It works in the same way as a food pantry but is based on an honor system, where it’s implied that you should take only as much as you need and leave the rest for other visitors to the box.

The Rev. Dee Harper, pastor at Farmington UMC, said the idea for a blessing box started from another church that he pastored before his current appointment. The church – Des Arc First United Methodist Church – had launched a blessing box as a way to serve the community, and when Harper was appointed to Farmington UMC, church members there were looking for ways to reach out and provide to the community as well.

Harper said that even though the church is a small to medium-sized congregation, they are a very mission-minded church and look to do whatever they can to help out their community.

“One of the things that was expressed to me when I got here in 2017 was a desire to expand the food pantry ministry at the church,” Harper said. “We were inspired by the work of 200,000 Reasons and other food pantries, and one of the great ways that we figured out how to reach more people was through the blessing box.”

It was at the beginning of September – nine months after the blessing box went up – when Lay Leader Elizabeth Floyd was restocking the box and noticed a surprise inside in the form of a handwritten note.

On a single piece of paper left inside the box, a grateful recipient had written the following note: “I just want to say thank you to anyone and everyone who has ever donated to this pantry. My family and I have been able to eat on nights we had nothing because of you guys. I can only hope one day we will be able to help another family like you guys have helped us. We appreciate everything you’ve done. Thank you so much.”

The note was signed “A family in need.”

In response to that note, another visitor to the blessing box wrote on that same piece of paper a letter of encouragement to the family.

“To anyone who uses this pantry, I just want to let you guys know, keep your head up. It won’t be like this for long. Keep pushing through because you WILL make it one day. You are loved.”

“It was very moving,” said Harper, when asked about the note. “To see that what you’re feeling led to do has helped someone. And that somebody would take the time to write that out and put it in the box to let us know they were helped by the box…it was very moving. It makes you feel like you were being led directly by God and used by God to help others.” 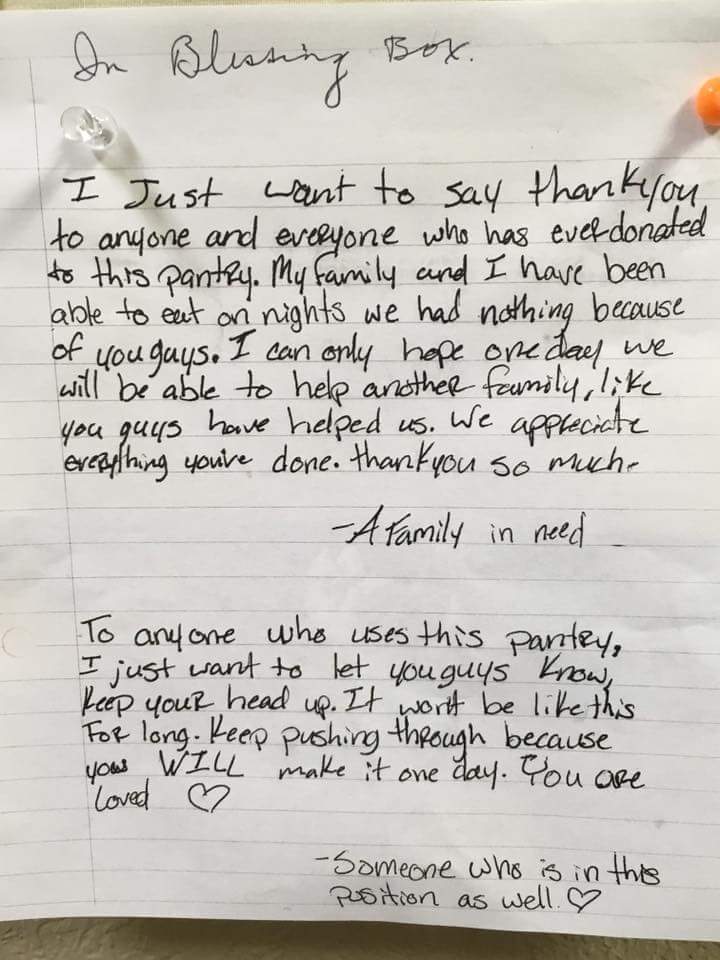 As far as where the food that typically goes into the box comes from, Harper said the church does a monthly drive where they hand out reusable grocery bags at the beginning of each month – along with a list of needed items – and ask people to bring those bags back filled with the items for the food pantry and blessing box.

It’s not just church members who are helping to fill the box each month, either. Harper says that others in the Farmington community have heard of what the church is doing with the Little Free Pantry and have donated their own supplies to help fill the box as well.

The blessing box itself is a large wooden structure that resembles a chicken coop. In fact, one of the reasons it resembles a coop so closely is thanks to Farmington High School’s Future Farmers of America group, which built the box for Farmington UMC based on plans for chicken coops they’ve assembled in the past.

According to Harper, other versions of the blessing box have been made from items such as old medicine cabinets and display cases from stores. Written on many of these blessing boxes, you might find some version of the saying “Take what you need. Leave what you can. Above all, be blessed!” Some even reference the words of Jesus, taken from Matthew 25:35, where He says, “For I was hungry and you gave me something to eat, I was thirsty and you gave me something to drink, I was a stranger and you invited me in.” (NIV)

For Harper, when he contemplates the impact of the blessing box ministry and the people it has helped, he remembers a quote that has resonated with him in a powerful way.

“We can do no great things, only small things with great love.”

“I hope that people will be encouraged to find those ways – whether it’s a blessing box or something else – to serve other people. Little blessings have more of an impact than we think they do,” Harper said.