It Impacts Jesus as Well

Jesus says in Matthew 25:44-45, “They also will answer, ‘Lord, when did we see you hungry or thirsty or a stranger or needing clothes or sick or in prison, and did not help you?’“He will reply, ‘Truly I tell you, whatever you did not do for one of the least of these, you did not do for me.’ (NIV) You’ve heard these powerful words hundreds of times. And while you may rightly focus on the part of the parable that focuses on the importance of helping those on the margins, there’s more to it. Jesus is making that radical claim that you will actually be helping or harming Jesus as you serve or fail to serve those who are most hurt by the world. That’s something to think about as our world slowly begins to re-open in the ongoing COVID-19 crisis. And here’s why. How responsibly you act around others in the coming months of a COVID-19 world does not just impact them – it impacts Jesus as well.

Jesus Has Been with You

Jesus has been with you every moment of the COVID-19 crisis helping you cope, healing your hurts, and helping you better understand whose you are, who you are and how you are to live. It would be a terrible waste to have grieved for those who have died, had your life turned upside down, spent weeks in self-isolation, missed being able to hug loved ones, fretted about what the future is going to be like and not been able to join together with your faith family – and then come out on the other side of COVID-19 the same person you were before. So make sure you spend time today simply being embraced by Jesus who loves you so much he can’t be anywhere but with you when you need him most.

COVID-19 has changed your life in a myriad of ways. But in the midst of all this change, God hasn’t changed. God still loves you passionately. Jesus still reaches out and urges you to follow him more faithfully. And the Holy Spirit still stirs your spirit to do things you cannot imagine yourself ever doing. But here’s the great irony. In the midst of so much change that threatens to overwhelm you, God is changing your life far more than COVID-19 ever could. That’s because God changes you from the inside-out – which is always more meaningful, more significant and more lasting. So in this pandemic season of massive change that threatens to overwhelm you, celebrate the change God is bringing about in you that results in abundant life.

Due to the recent outbreak of COVID-19 in Arkansas, many churches moved to an online or limited in-person format to continue worshiping together and sharing the message of Jesus Christ. To assist with this effort, the Methodist Foundation for Arkansas generously gave a grant to Arkansas United Methodist Churches with the intention of keeping congregations connected during the outbreak. With this grant, the Conference was able to provide 52 charges with 6 months of Zoom Pro, 22 charges with funds for printed materials and postage, 14 charges with funds for mileage, and 56 charges with Mevo cameras; for a total of over $30,000 in funds distributed across the state. “We are excited to see we received the Mevo grant and look forward to seeing how to utilize this new tool for ministry,” said Rev. Allen Crum of White Hall UMC, one of the recipients of the grant. We are incredibly thankful for the Foundation’s gift and their dedication to supporting local churches across the state of Arkansas in these times.

In early April, one of Arkansas’ own got the opportunity to compete on the popular TV trivia show “Jeopardy!”

Joe Coker, a junior studying physics at Hendrix College in Conway and son of the Rev. Keith Coker, made it to the 2020 Jeopardy! College Championship, competing against college-age peers from across the U.S.

Coker, who graduated from Conway High School in 2017, made it to the semi-finals in the tournament and won the semi-final prize of $10,000.

We were recently given the opportunity to glimpse into the world of TV game shows and asked Coker a few questions about his once-in-a-lifetime stint on the legendary game show.

How did you make it on to Jeopardy? What was the process behind getting on the show?

Back in October, I saw that Jeopardy was offering an online test to appear on the College Championship and decided to take it just for fun. I was pretty surprised, but very excited a couple of weeks later when I got an email that I was invited to Austin over a weekend in November to audition in person. For that audition, I was in a group of about twenty students, mostly from universities in the South. They had us take a written test, then called us up three at a time to play a practice game and to conduct personality interviews, similar to the interview portion of the show. I did okay on the test, but I thought I did pretty badly in the practice game. They told us they would call around the first of the year if we were going to be on the show, but that we wouldn’t hear anything if not. The New Year came and went, and I had pretty much written it off until January 15, when I got a call from Culver City, CA (where the Sony studio is), and it was Glenn Kagan, Jeopardy’s contestant coordinator, telling me that I had been chosen for the College Championship. I was beyond excited; I couldn’t believe it when he gave me the travel information. I’m not sure I really believed it had happened until I got an email later in the week with contracts to sign and flight information to fill out.

Growing up, did you ever have dreams of being on a game show?

I watched Jeopardy a lot when I was younger, but I stopped watching regularly around when I was in middle school. But I remember being a kid when Ken Jennings made his legendary run on the show, and I was totally enraptured by his performance. He was so smart and seemed like such a warm, friendly guy. I think that was the peak of my Jeopardy dreams. As I got older, the odds of getting on just seemed so low that I didn’t get my hopes up. Getting to be on the show was a childhood dream come true. 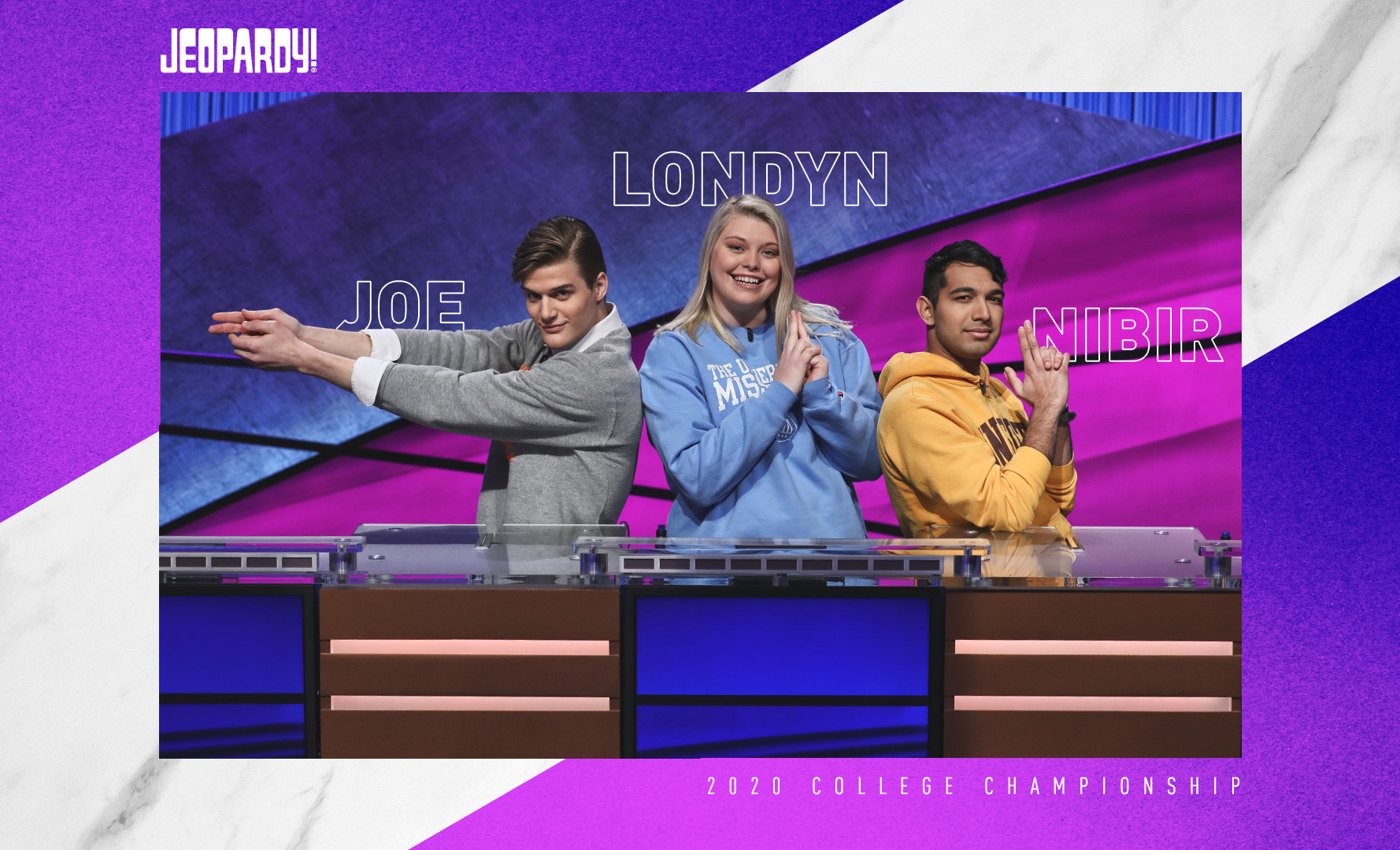 The show was obviously filmed quite a few months before it aired and before COVID-19 pretty much shut down the world. How long ago did you film for the show and did they ask you to keep the results of your time on the show secret from everyone until it aired?

We filmed the entire tournament in two days in early February. All the contestants had to sign non-disclosure agreements, and everyone who attended was asked not to reveal any information about the clues or the results of the games. It’s been very difficult to keep everything a secret, mostly because I’ve been wanting to tell people all about the experience but I’ve had to be careful not to let anything slip.

What was your strategy for the show? Did you spend lots of late nights studying as much trivia as you possibly could?

To prepare, I started by watching a College Championship from a few years ago and keeping track of what kind of questions were asked and, of each category, how many I knew. I found that my weakest area was geography, so after that, I spent a few days memorizing the world map until I could identify any country and could picture the map in my head well enough to know what was next to what. I also listened to the podcast co-hosted by Ken Jennings called The Omnibus, where he and his co-host talk about all sorts of topics, in hopes of picking up some trivia. I definitely got some responses right on the show that I wouldn’t have gotten just a few weeks prior.

Do you think your time at Hendrix helped you to prepare for Jeopardy?

My time at Hendrix has taught me more than anything else how to synthesize information from various disciplines. You have to be able to recall knowledge of history in a politics or religion class, you have to be able to recall aspects of math and chemistry in a physics class, and so on. College, especially a liberal arts college, has helped me learn how to quickly access information from completely different areas of my memory, which is a crucial part of Jeopardy.

Do you hope to go back on the show in the future, or maybe try to compete on another game show?

Unfortunately, barring a dramatic rule change, my performance on the 2020 College Championship will be the entirety of my Jeopardy career. Not only can contestants only appear once, but even immediate family members can never audition to be on Jeopardy. As far as other game shows go, I just can’t see myself appearing on any of them. Jeopardy is the one I loved as a kid, and it’s the only one I really identify with. But I’m not complaining; I’ve been insanely fortunate to have the experience I got to, and if it means I can never be on the show again, I consider it a small price to pay.

Is there anyone else you want to acknowledge as a big source of inspiration and support for you, not just on the show, but in your everyday life?

I definitely want to thank my family for encouraging and supporting me on my path to becoming something of a know-it-all. They certainly help rein me in if it gets obnoxious, but they cultivated in me a love of knowledge and never made me feel embarrassed or silly for knowing obscure pieces of trivia. I also want to thank my girlfriend for helping me study and putting up with the endless stream of Jeopardy reruns I watched in the weeks leading up to the competition. And, of course, I owe at least a little bit to every teacher I’ve ever had, and they deserve my thanks too.