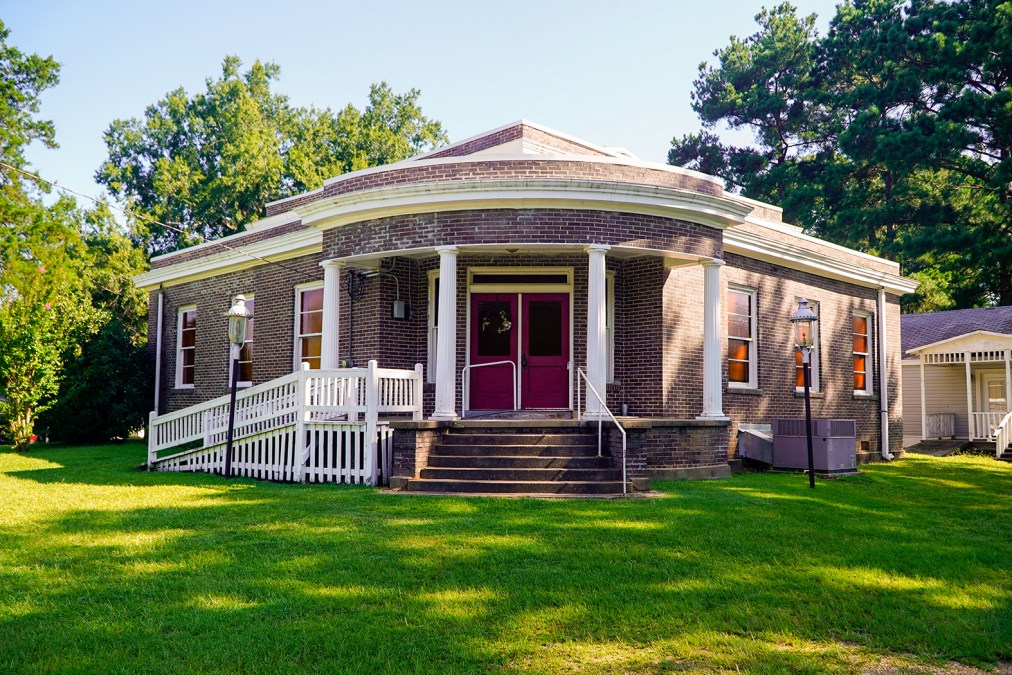 Saving History
Emmet United Methodist Church is in Danger of Collapsing. Its Congregation is Trying to Save the Building and Their Town’s History 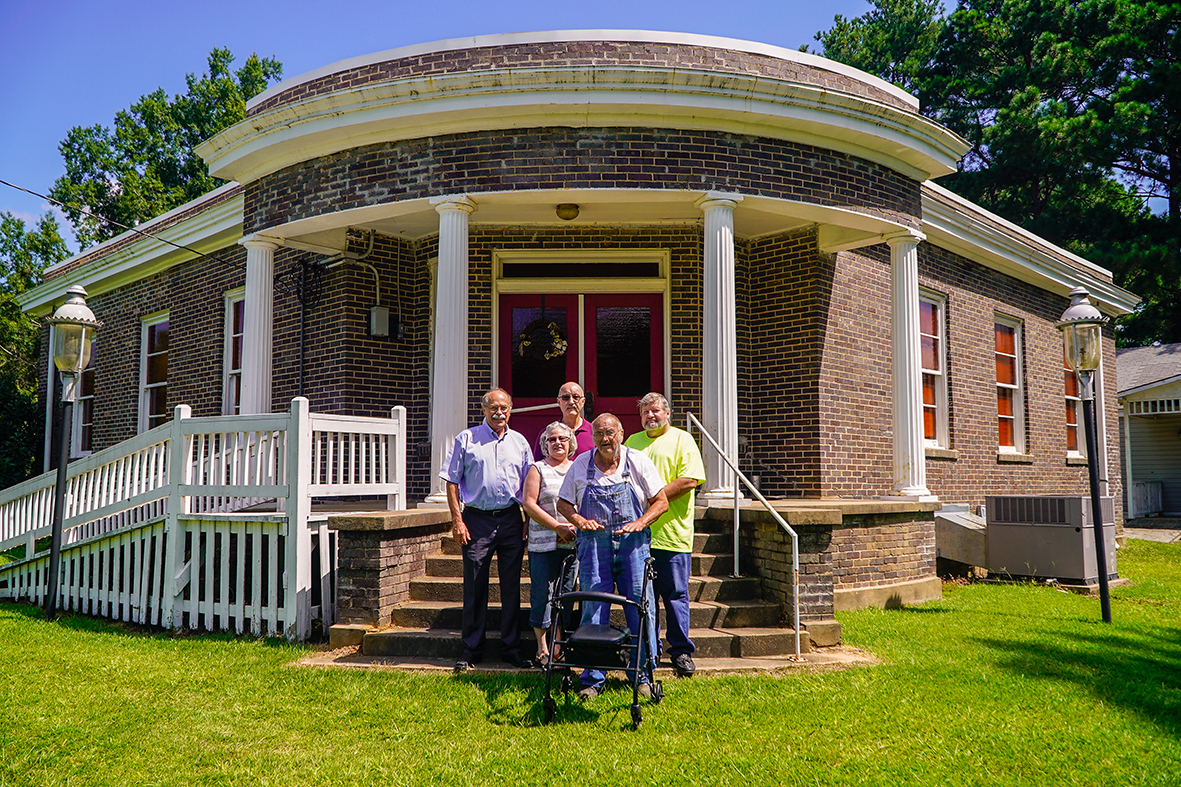 On a long and remote stretch of U.S. Route 67 South, situated at the halfway point between Prescott and Hope, sits the small railroad town of Emmet, Arkansas.

Emmet looks like any other small town in Arkansas: quiet and sleepy, with hints of its former heyday as a railroad junction and agricultural town speckled throughout the community of about 500. The day I came into town, a young man on a camouflaged ATV was driving through his neighborhood, the only moving vehicle anywhere in sight.

Unless you were visiting family or happened to live in the town, no one would blame you for passing through without stopping and exploring.

But just across the railroad tracks, in a quiet area of town, sits a little piece of Methodist history; one that is in serious danger of being lost to time and erosion.

The Emmet United Methodist Church, 209 S. Walnut St., is an odd little church building. The church was first organized in 1855. The building where the church now sits was constructed in either 1917 or 1918, according to documents provided by the National Register of Historic Places, and features design elements that seem out-of-place for a small, Southern church.

Rather than having a gorgeous steeple that reaches high into the sky or intricate castle-like towers that are common among many Methodist church buildings in the Conference, the Emmet church is a one-story square brick building with stark white columns that greet you as you approach the entrance to the sanctuary.

The entrance is affixed to a corner of the building rather than a side, creating an extra wall on the exterior that gives it a pentagonal, rather than a box, shape. It more closely resembles a former county government building or a post office than a church.

According to John Mohon, a member of Emmet, the church’s interior layout is based on the Akron-style church, and the outside of the church resembles the Colonial Revival style. As far as Mohon and the other members of Emmet know, this is the only Akron-style church in the Arkansas Conference. It certainly stands out among churches in the South.

Akron-style churches originated in Akron, Ohio and are identified by the unique layout of the sanctuary. They were popular in the late 19th century into the early 20th century but started fading out of style around World War I. The stage and pulpit are centered in a corner of the building, with curved pews that arch out and to the back of the sanctuary. On either side of the pews are sliding panels that resemble garage doors. These doors were used to expand the seating in the sanctuary if more pews were needed. 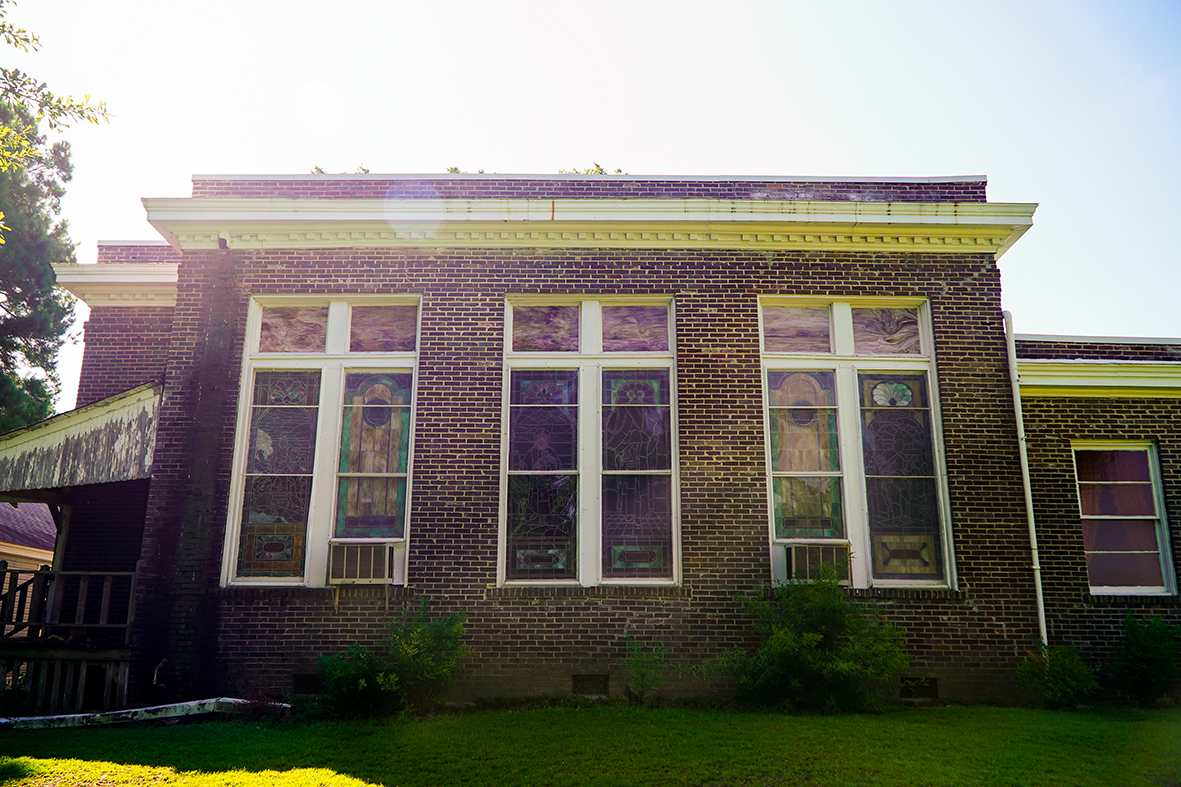 Emmet UMC has both the curved pews and the wooden sliding doors, making it a classic example of an Akron-style church.

But as the church enters into a new century, it is beginning to show its age in ways that could seriously damage its future viability.

On the back right corner of the building, the foundation that has supported the church for more than 100 years is beginning to buckle and risks collapsing if repairs aren’t made to it soon.

Dianne Halliwill, a member of Emmet whose family has been attending the church for decades, said the congregants began to realize the church was in need of serious repairs more than a decade ago.

In 2009, a team of people at Emmet worked to get the church listed on the National Register of Historic Places. They were successful in getting the designation that same year, but although being on the Register gives merit to the church’s historical value, it gives no guarantee of grant money for repairs or protection from deterioration. That task has been left up to the members of Emmet.

Years went by before any action was taken to repair the church; people in Emmet didn’t quite know what to do to save it.

In 2018, Charles Trexler, who travels from Magnolia every Sunday to attend church in Emmet, began speaking with the newly appointed pastor of Emmet, the Rev. Wayne Chambers, on a way to secure funding for the repairs.

They had heard that another church in Arkansas on the National Register of Historic Places, Hamburg First United Methodist Church, had written up a proposal and applied for a grant from The Department of Arkansas Heritage to make similar repairs to their church building.

They called up Gary Clements, an architect at Clements & Associates in North Little Rock who had surveyed the Hamburg church, and asked him to come by and survey their church as well. Once the survey was completed, a proposal was written and submitted to the Department of Arkansas Heritage.

Chambers said they were one of 44 buildings in Arkansas in 2019 to receive a grant. 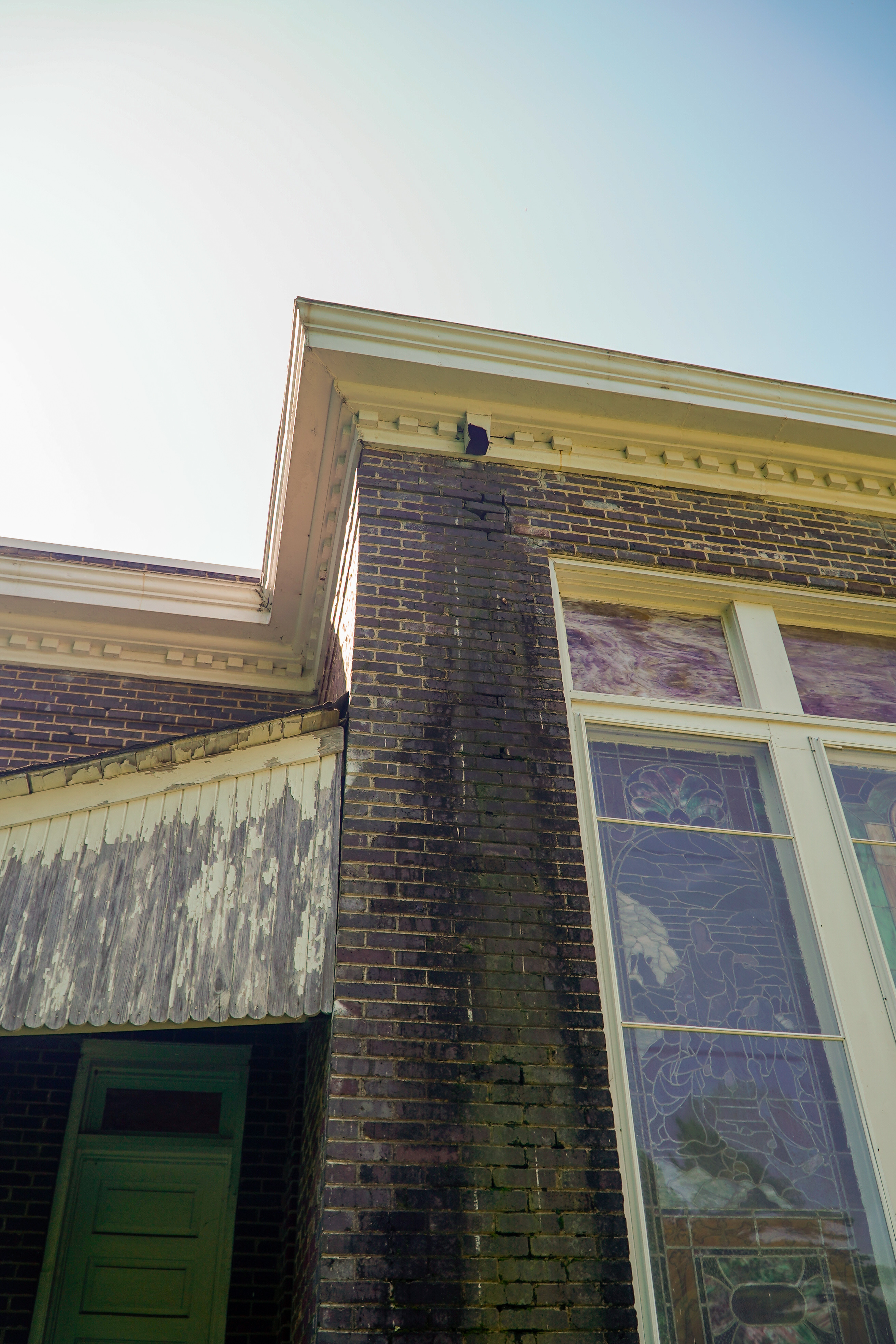 The downspout from the roof of the building has also rusted and fallen apart. || Photo by Caleb Hennington 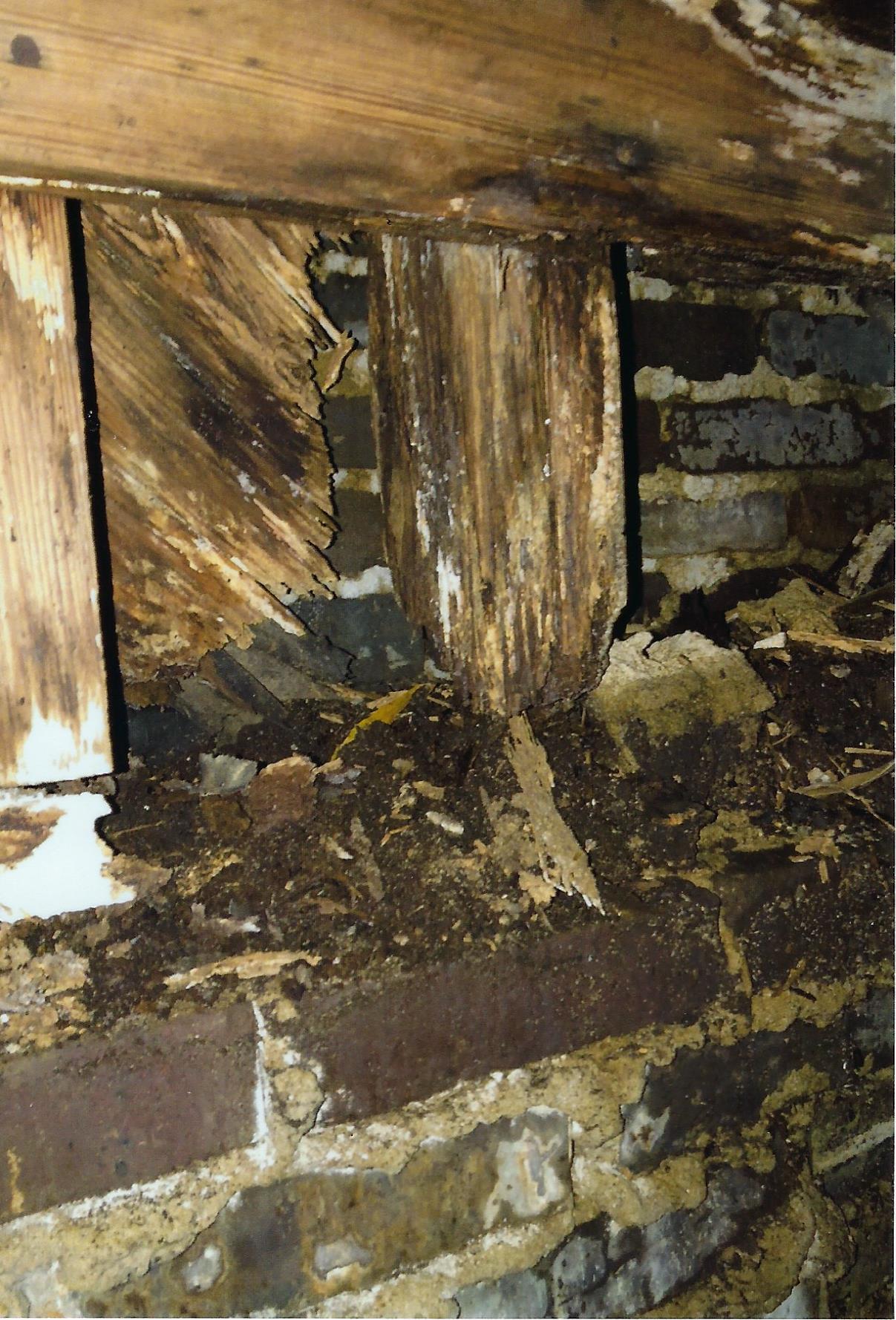 Underneath the church, beams that are more than a century old are beginning to rot due to water and termite damage. || Photo Provided by Charles Trexler 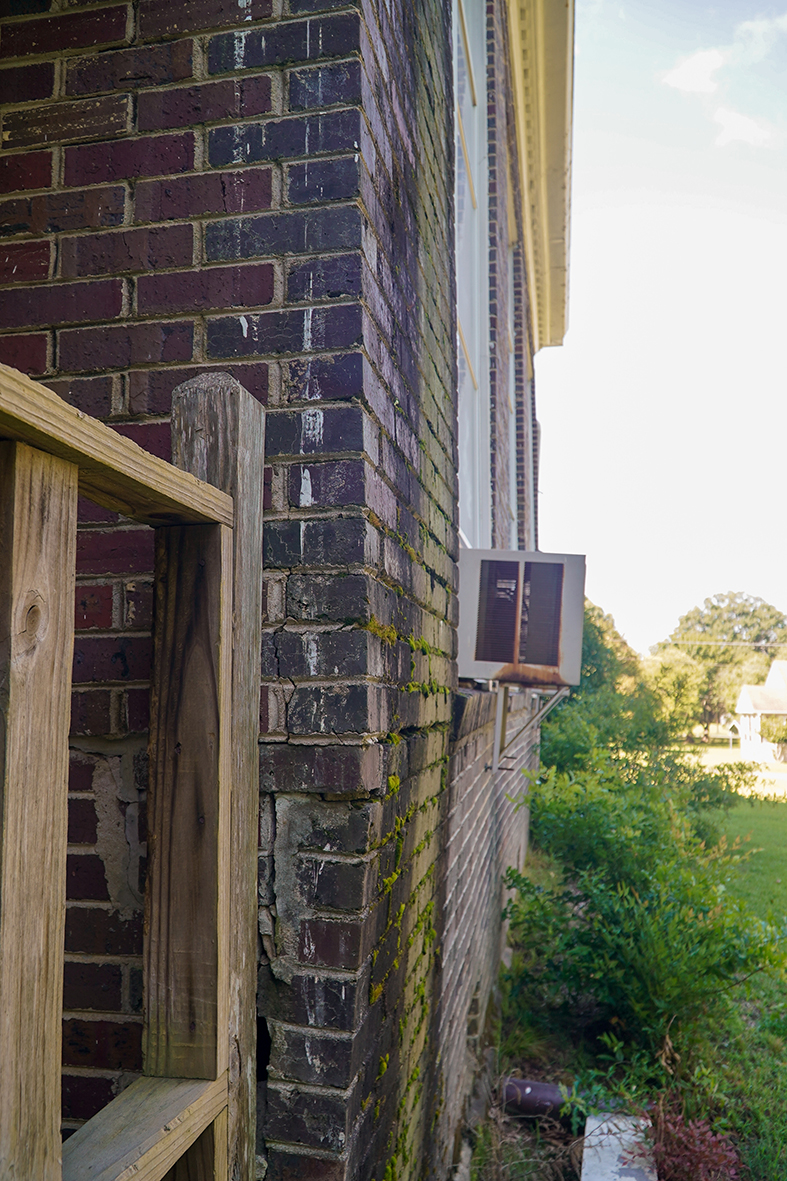 The brick on the backside of the church is beginning to bow out due to damage to the beams supporting the church. || Photo by Caleb Hennington

“I attribute that highly to God because there were many things that could have prevented us from getting this grant,” Chambers said.

Trexler estimates that repairs for the building’s foundation, as well as replacing part of the damaged roof and repointing the original brick masonry, will cost around $200,000.

To date, the church has been able to raise $15,500 through fundraising and donations which was matched by a grant of $31,000 from the Arkansas Historic Preservation Program, a division of The Department of Arkansas Heritage, bringing the total to around $46,500. But in order to receive grant money from the state of Arkansas, the church has to first raise money.

“Whatever we raise, the state can match that amount twice. But even though we’re on the National Register of Historic Places, we can’t receive any grants unless we raise money,” Chambers said.

Steve Halliwill, Dianne’s husband, said that when spending the grant money, they also have to use it in a way that repairs the building as close as possible to its original design.

“That includes the foundation, brickwork, lights, everything,” Steve said. “We can’t just go buy some lumber and sheetrock and get it fixed on a budget.” 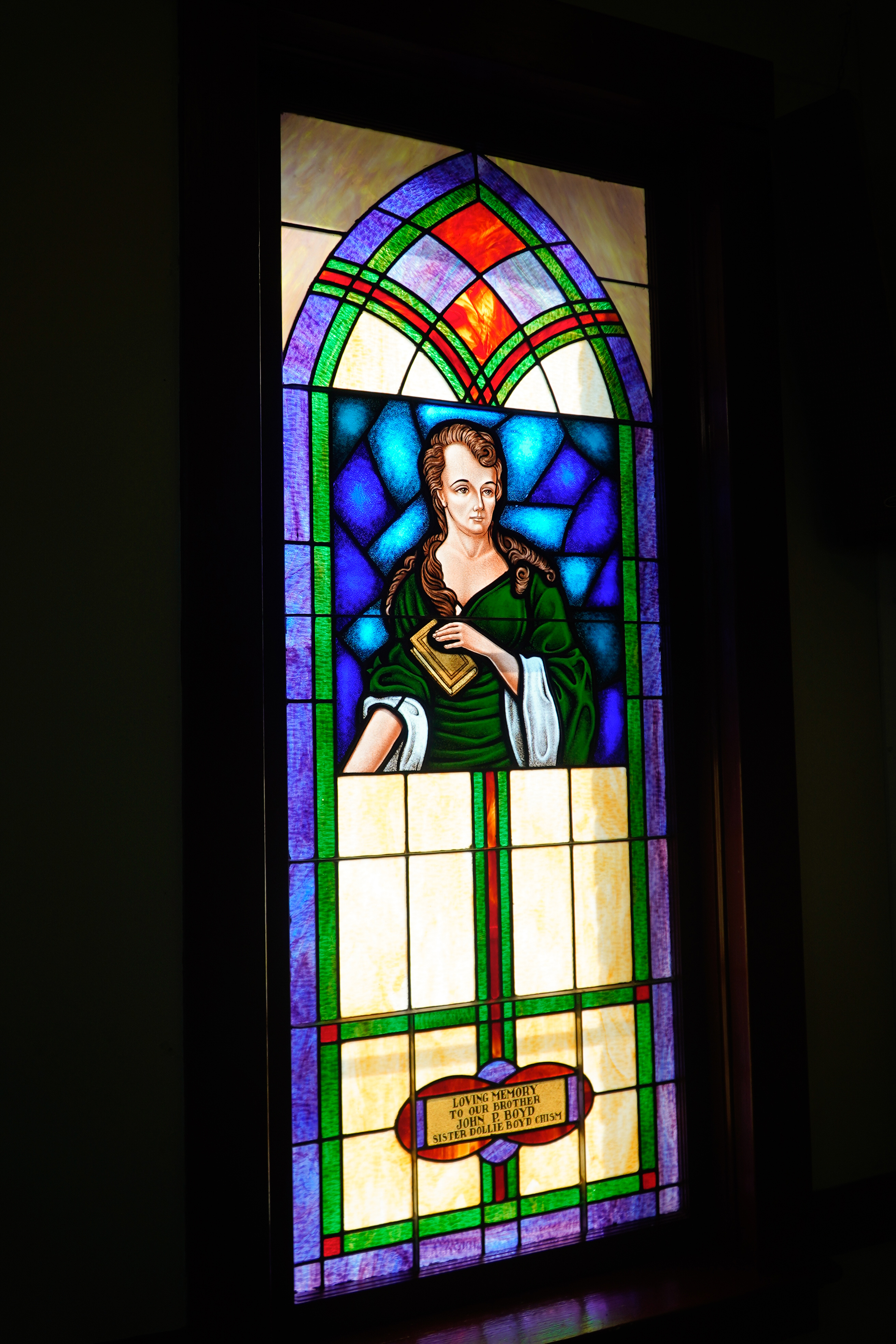 One of the first parts of the building that will be replaced is the foundation. Underneath the church, termites and water damage have eroded many of the beams that support the church’s structure.

After the foundation is fixed, the roof, downspout, and some interior work will need to be repaired, including the fragile stained glass windows on the walls.

The church has an average weekly attendance of eight, 11 on a good Sunday. Even though the faithful members of Emmet are generous with their time and money, there’s only so much they are able to raise on their own.

The good news is that Emmet can reapply for the grant every year, as long as they continue to raise money.

Much of the interior of the church remains intact and showcases the beauty and thought that went into every detail of its design.

Inside the sanctuary, the beautiful stained glass windows tell the story of not only the gospel of Jesus Christ and John Wesley — the founder of Methodism — but also the many families who have loved and raised their families there.

Names like Garland, Boyd, McSwain, and others adorn the bottoms of the stained glass that were created in honor of these families.

There’s also a stained glass image dedicated to Susannah Wesley, the mother of John and Charles Wesley — a unique addition that’s not unheard of but certainly uncommon among Methodist churches. 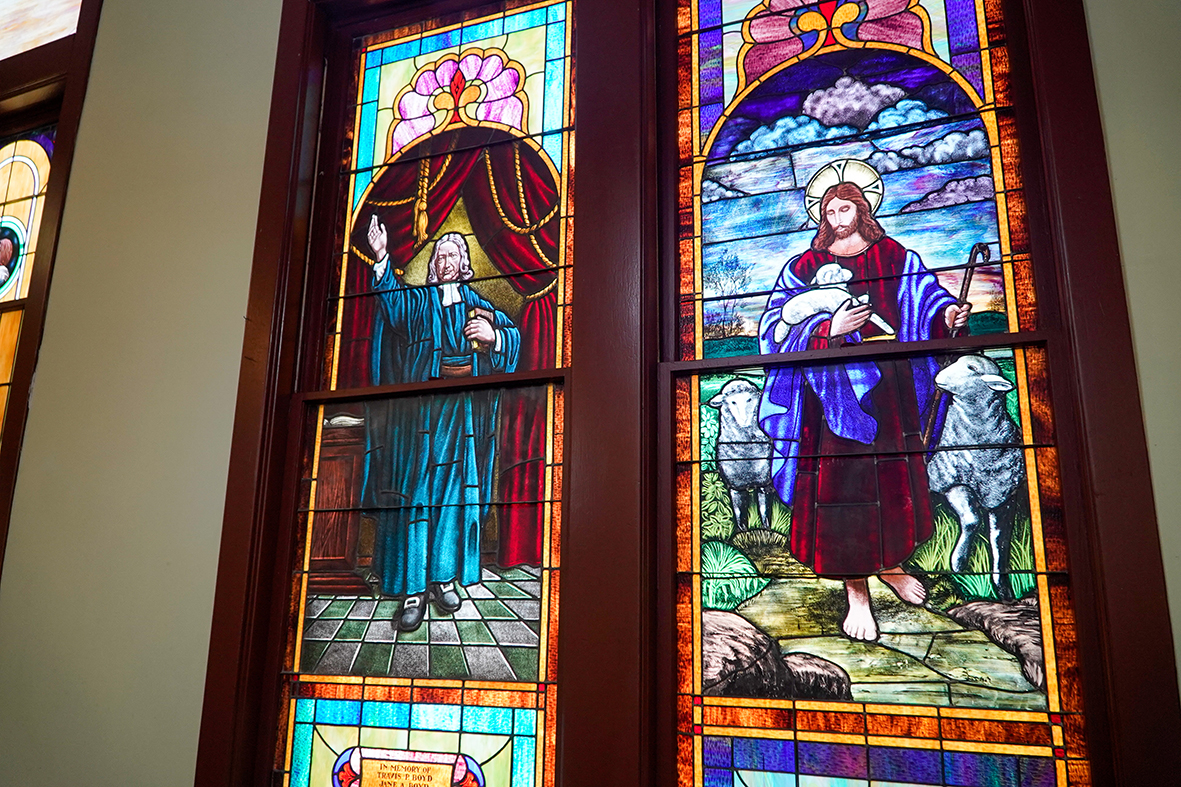 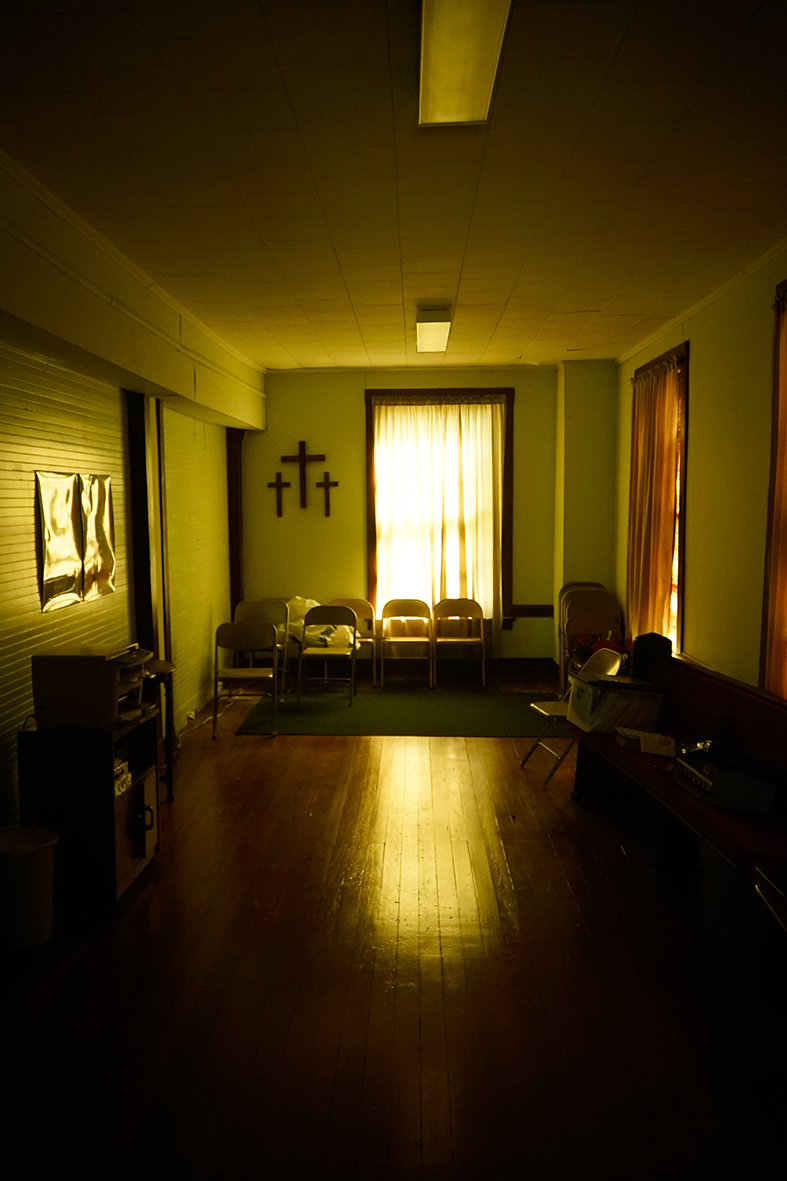 Most of the windows on the exterior of the church feature uncommon yellow-tinted windows, like the one seen in the picture above. When the sun shines through the windows, it gives it a golden glow, no matter what time of the day it is. || Photo by Caleb Hennington

The brick that was used to build the exterior of the building can even be traced back from current members of the church to past members; Dianne Halliwill’s family, the Boyds, were sharecroppers in the early 1900s. The Boyds harvested and traded their grain to a brick masonry in Hope that needed food for their mules, leading to a partnership that allowed the church to acquire bricks for their church building.

There are deep ties to Emmet UMC that continue to push the Halliwills, Mohon, Trexler, Chambers, and others to preserve their church.

“If we don’t do anything to the church, we know that it will collapse. And then there won’t be a church here anymore,” Dianne said. “And once you lose a church in a small town like this, you lose part of your town as well.”

At this point in their fundraising, the members of Emmet have realized it will be very difficult to raise the money they need on their own. 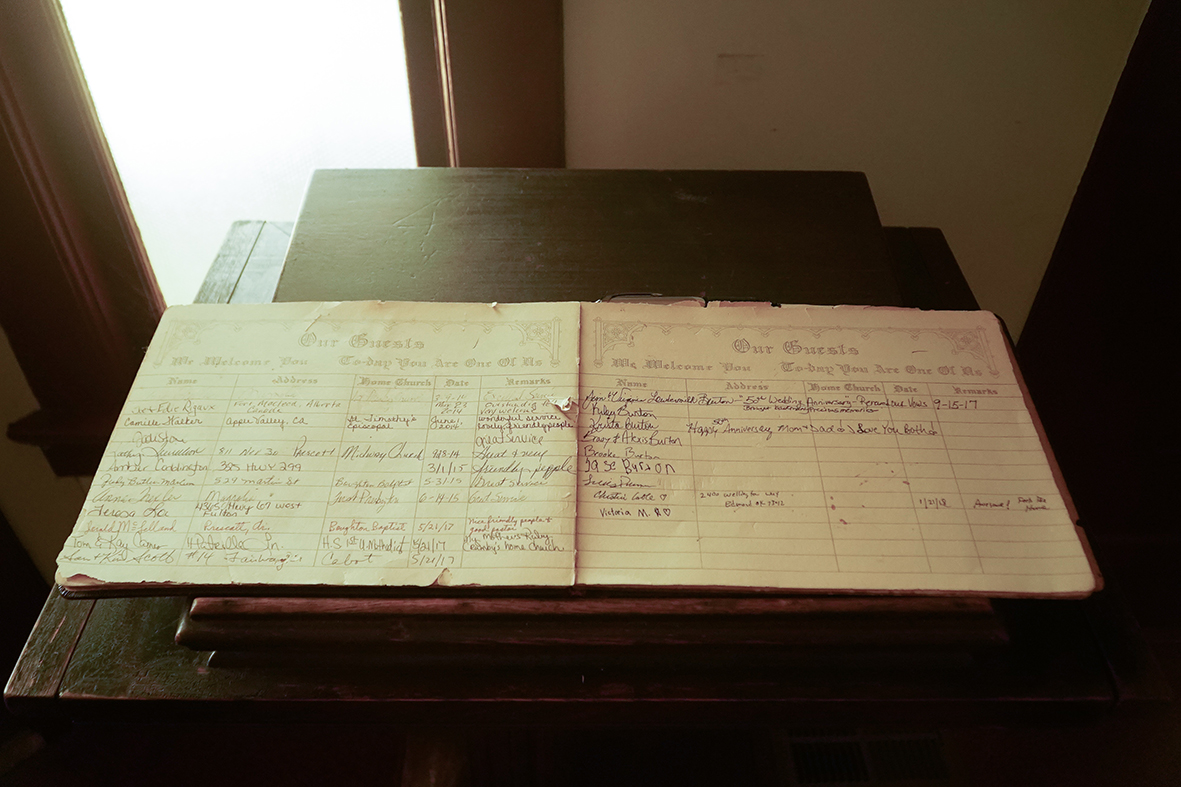 A tattered and worn guest book greets visitors at the entrance to the church. || Photo by Caleb Hennington 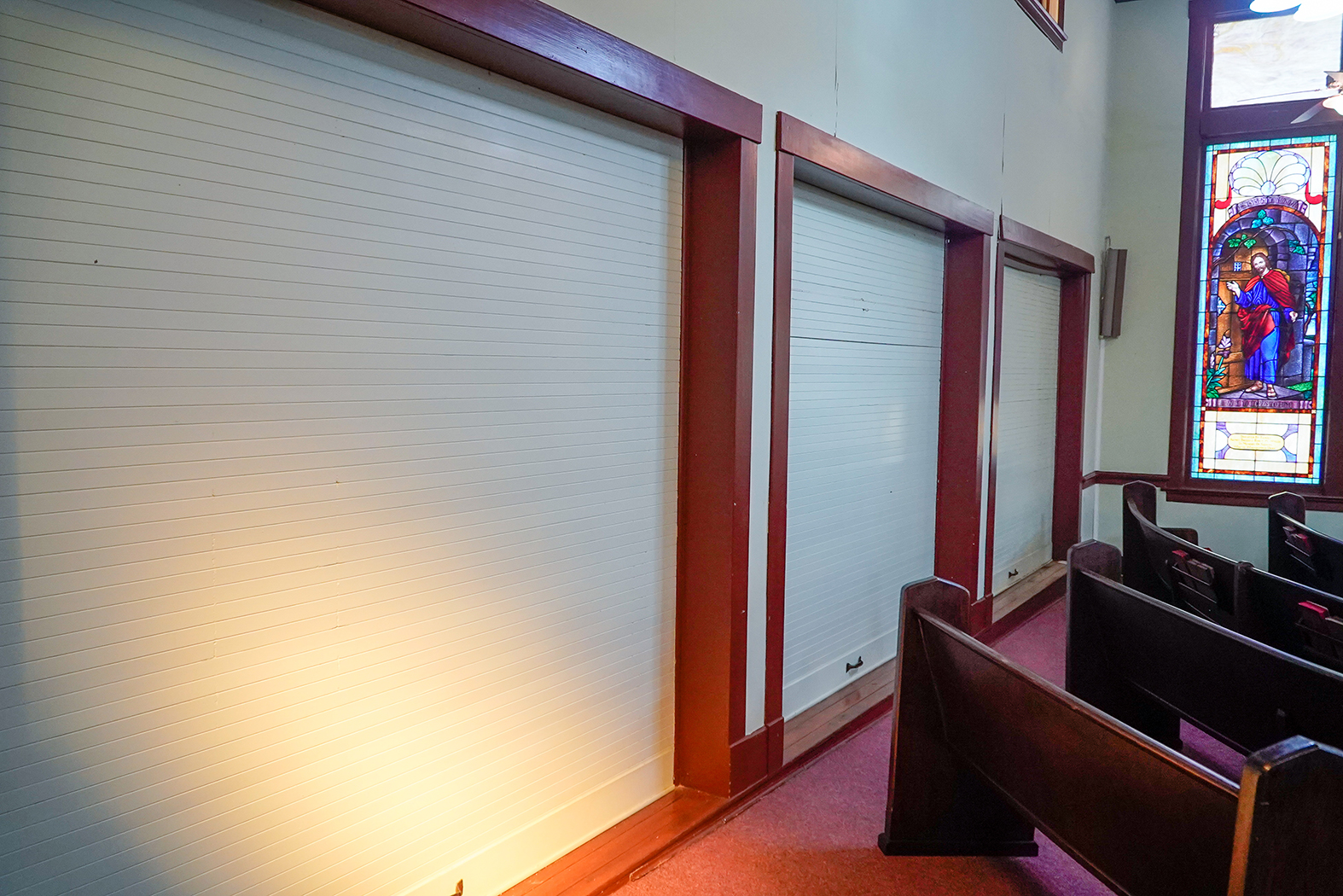 The church’s sliding wooden doors, pictured above, are a unique feature of the Akron-style church. These doors were used to expand the seating in the sanctuary if needed. || Photo by Caleb Hennington 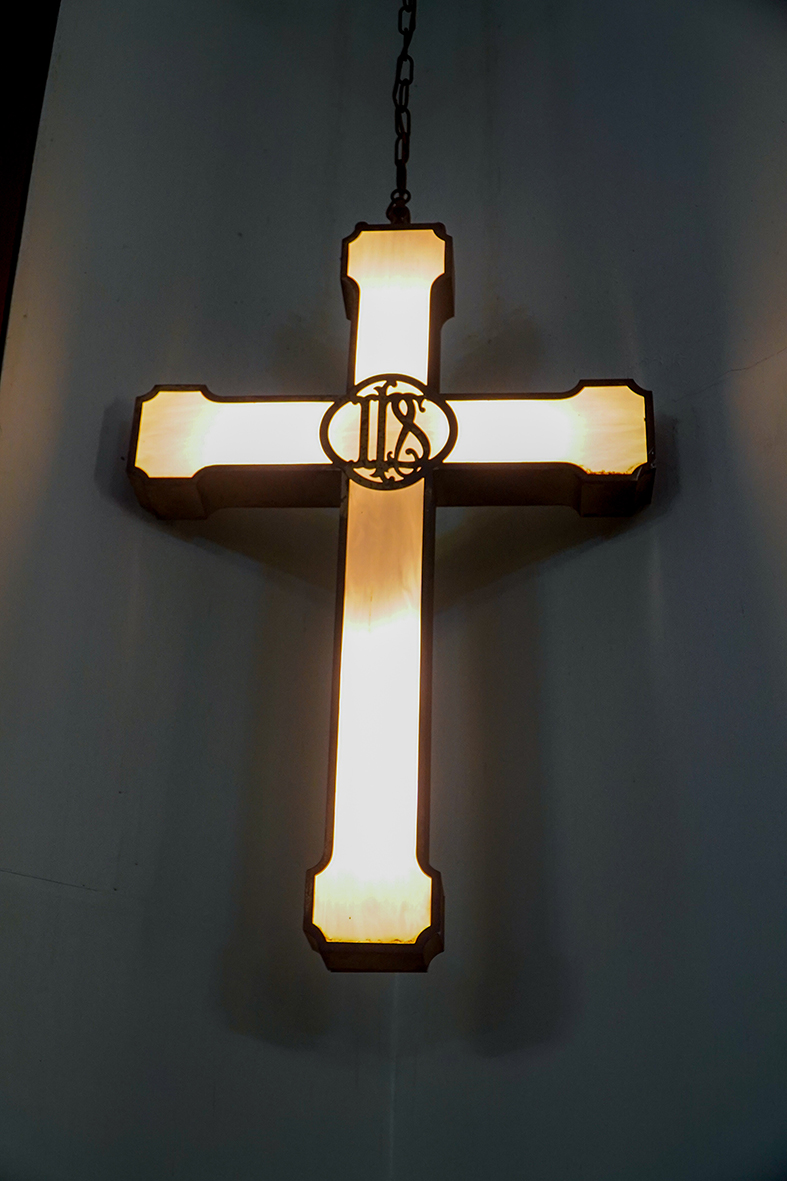 With so many expenses required to get the building back to the way it was and the small size of the church membership, they are now reaching out to their United Methodist Church family to help them out.

“Whatever anyone could give would be very much appreciated,” Dianne said.

If you would like to make a donation to the church for their building repair fund, you can mail it to Emmet United Methodist Church, P.O. Box 22, Emmet, AR 71835.

For Dianne, Emmet UMC is part of her life story. It’s worth it to save the building in which she grew up and spent countless Sundays in the pews of that unique, Akron-style sanctuary.

“When I’m sitting in the church on a Sunday morning and the light is shining through the stained glass and filling the room, that’s what reminds me that this church is important. Because those names on that stained glass are my family and many other people’s family as well. This church is home to me.”