Book Review: The Forgotten Books of the Bible

Lead Equipper of the Center for Vitality 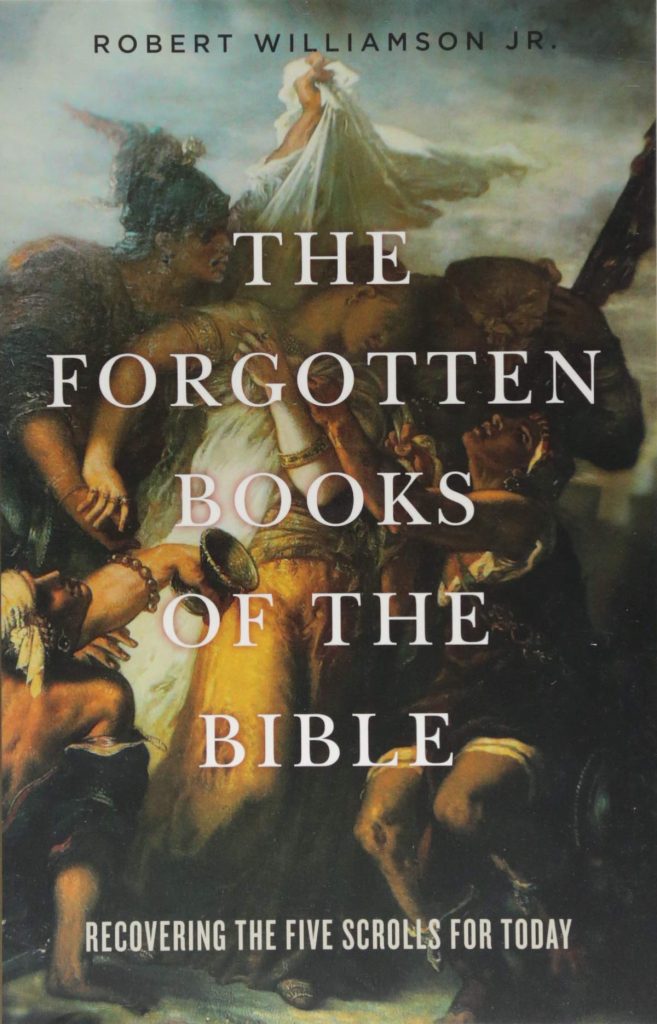 In just a few sentences in his introduction, Hendrix Associate Professor and Mercy Community Church of Little Rock founder, Dr. Robert Williamson captures the aim of his book: “I hope that reading this book may open up a little-known part of the Bible to you in new and unexpected ways. These forgotten books have a lot to say. I don’t expect you will agree with everything they (or I) have to say, but I do hope they may provoke you to think and act in more theologically rich ways – as they have done for me” (xix). About halfway through his book, I realized how true that statement was. Each of the biblical books he examines are contrary voices to some dominant perspectives of Scripture. Then Williamson himself applies the texts to amplify voices in our current context that at times struggle to be heard.

Williamson studies the Five Scrolls, the Jewish name for the books of Song of Songs, Ruth, Lamentations, Ecclesiastes, and Esther. He points out that while each of these books have come to take a precious place in Jewish faith, as readings from these books are all tied to significant moments in the Jewish year, they are frequently ignored in Christian circles. Perhaps the reason for sidelining these texts is that they present somewhat challenging theological perspectives. In fact, Williamson shows through his careful study how these works challenge the voices of other biblical texts.

Song of Songs, with its joyful celebration of sexual expression, stands in contrast to the restrictive passages of Leviticus and some of Paul’s letters. Ruth is a bold answer to Ezra-Nehemiah’s call to cast out the foreign wives and children, as Ruth is a Moabite woman who not only integrates into Judah but becomes the great-grandmother of King David. Ecclesiastes presents a voice with little to no hope in an afterlife and a theology that God can be unreliable, which stands in notable contrast to much of the New Testament. Esther tells a Jewish story from a position of oppression which, while many of the biblical texts are written from similar perspectives, are not necessarily the voices we most like to hear.

At the center of the book, though, Williamson’s discussion about Lamentations may capture the heart of his project, and may also serve a great need in the church, and our society, today. Williamson points out that there are five voices in conversation in Lamentations: the Funeral Singer, Daughter Zion, the Strong Man, the Scoffer, and the Community Voice. Williamson takes time to distinguish the unique social and theological perspectives of each voice. In the end, however, the Community Voice finds ways to hold all of them together. That final voice recognizes that there is wide diversity in how we respond to situations, notably traumatic situations, and that all of those voices have their validity. They should all be heard, and they should all hold together to make a complete whole. This word is one we desperately need in our church today as we struggle to find unity amidst diversity.

This book might serve as a way to begin such “holding together” work. In his application of the biblical texts to current issues, Williamson deals with the #metoo movement (Song of Songs), immigration (Ruth), Black Lives Matter (Lamentations), Terror Management Theory (Ecclesiastes), and the rise in white nationalism (Esther). Because these issues can be very divisive ones, there is a distinct possibility that this book could exacerbate some division among us. However, because this book is structured as an invitation to see these biblical books as additional voices in the conversation, perhaps Williamson’s work could inspire frank conversation that is respectful and loving. After all, if the Bible can canonize diversity of thought and ways of living, can we not also model such a community? Surely there is hope amidst lamentation.

Should this book prove too controversial to attempt as a study, I do think it would serve as a welcome resource on the Five Scrolls for pastors and seasoned teachers of the Bible. Williamson’s exegesis is careful and also accessible. Though he works often with the Hebrew, he does so in a way that is not intimidating but rather inviting. His headings in the chapters could allow someone who chooses to do a sermon series on the scrolls quick reference to notable points about the works and their contexts.

You may not agree with everything Williamson says in this book, but do not seek agreement in reading it. Instead, seek a space for rich conversation, for in such spaces relationships grow. This potential for growth in knowledge of the Bible and each other is the central usefulness of Williamson’s work.