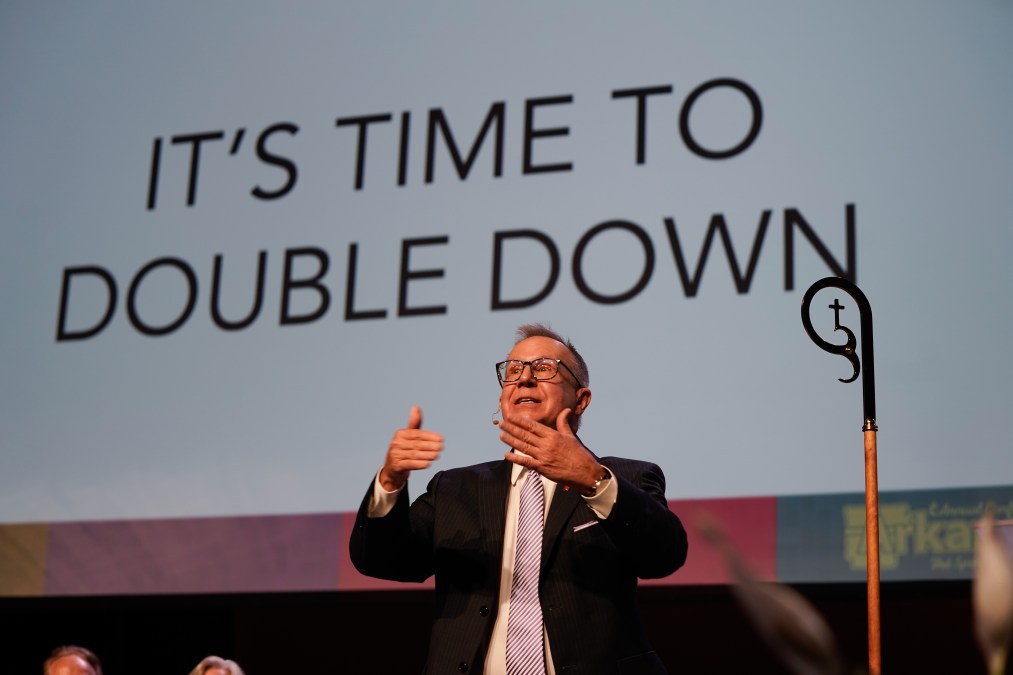 In his 2019 Episcopal Address to the Arkansas Annual Conference, Bishop Gary Mueller addressed the deep divides in the United Methodist Church and the hurt caused by the 2019 General Conference but reiterated the importance of “doubling down” on the crucial mission work being done by churches and ministries across the Conference.

Throughout his address, Bishop Mueller noted that this is the hardest Episcopal Address he has ever had to prepare.

“It’s the hardest because I have to stand up here in front of those of you whom I deeply love and confess I can’t take away your pain, change how people treat each other or fix The United Methodist Church – as hard as I have tried.”

In February, the General Conference of the United Methodist Church gathered in St. Louis to discuss matters related to human sexuality.

By a vote 438 to 384, the delegates voted to pass The Traditional Plan, which maintains the Book of Discipline’s current language regarding human sexuality, preventing the ordination of “self-avowed practicing homosexuals” as clergy and the performance of same-sex marriages by UMC clergy in United Methodist Church buildings.

Despite the difficulty of this year’s address, Mueller contrasted his initial thoughts by saying it is also the easiest address he’s given.

Mueller stated that he has personally experienced the truth of this year’s theme, “The Best of All, God is with Us.”

“It’s not just a catchy slogan, but a transforming reality more powerful than all the things that threaten to tear us apart.”

It is also the easiest address because of a shift in focus from the problems and uncertainty in Arkansas, to a renewed focus – “doubling down” – on mission work, according to Mueller.

In each example of doubling down, Bishop Mueller cited a different parable from Matthew 25, some of Jesus’s final teachings before the crucifixion.

Matthew 25:7-13 is the parable of the bridesmaids and their lamps.

“Jesus’s message to us through these words is clear. We’re not just disciples when it’s convenient. We’re disciples all the time,” Mueller said. “Arkansas, it’s time to double down on getting serious about our relationship with Jesus as Savior and Lord, double down on responding to his call to get involved in his ministry and double down about the importance of what’s at stake for Jesus, for others and for us.” 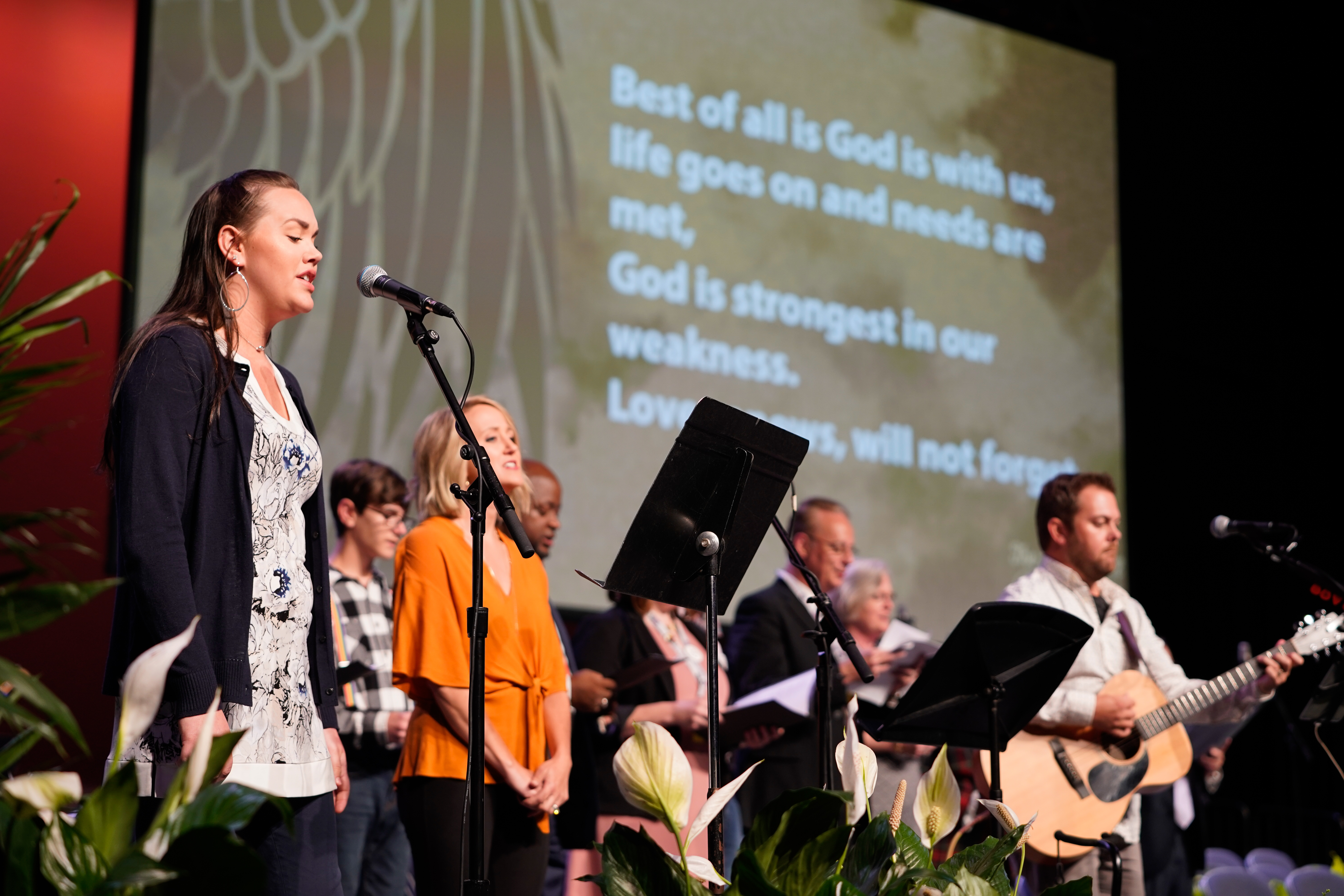 The worship band leads the Conference in a hymn during the opening worship service.

For an example of doubling down on being fruitful, Mueller cited the parable of the talents, in which a master gives three servants different amounts of gold. Two of the servants took what they were given and multiplied their earnings, but one servant chose instead to bury his gold.

The servants who invested their money were rewarded, but the one who hid away his money was rebuked.

“Jesus is telling us we are to use the gifts, resources and people we have been given to get results that actually bring about God’s transformation of lives, communities and the world,” Mueller said.

A few of the examples of Arkansans doubling down in the past and the future include creating places like Methodist-LeBonheur Hospital, Camp Aldersgate and Philander Smith College, as well as current ministries supported by United Methodist Churches, including Lucie’s Place, Breaking Bonds Ministries, and ECHO Village.

Bishop Mueller also brought up the current struggle many Arkansans are facing due to the Arkansas River flooding in cities along the river, such as Fort Smith, Dardanelle, Little Rock and Pine Bluff.

“This is something that we can all come together and help with right now. Many families are hurting right now, and they need your help.”

When mentioning his final point on doubling down, Bishop Mueller used the parable of the sheep and the goats. In this parable, Jesus casts away those who did not protect the least of these by feeding, clothing, and taking care of the sick and needy.

Mueller reminded those at Ozark Bank Arena that one of the major missions of the Arkansas Annual Conference is 200,000 Reasons, a ministry seeking to end childhood hunger in Arkansas. Since starting this ministry almost five years ago, that number has gone down from 200,000 hungry children to about 165,000 children.

“We can get it to 150,000 and then 100,000 and eventually zero. And we will. This is a way we can join together – regardless of whether we are liberal, conservative, in-between or confused – to double down on our acts of compassion,” Mueller said.

Bishop Mueller reminded the gathered crowd that he is aware there are still divisions within our Methodist congregations but also gave a hopeful reminder that there is still much work to be done within and outside of the Arkansas Conference.

“You are a member of The United Methodist Church painfully divided by matters of human sexuality that are beyond your ability to settle, regardless of your stance. But you also are a member of a local congregation that is still called to make disciples of Jesus Christ, who make disciples equipped and sent to transform lives, communities and the world.