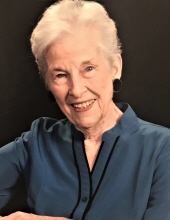 With her loving husband of 65 years holding her hand, Mary Sue Tanner of Hot Springs Village died on April 29, 2022. Sue was born on January 20, 1934 in Pine Bluff, Arkansas to the late P.A. and Lois Marie Smith. Following a childhood surrounded by friends, loving aunts and uncles, her brother and a myriad of cousins, she trekked to Hendrix College in Conway, Arkansas. She combined her keen intellect and innate curiosity with developing lifelong relationships, including with her future husband, George A. Tanner.

Following their marriage on July 8, 1956, Sue and George relocated to Durham, North Carolina while George pursued his master’s in divinity. She solidified her commitment to the Wesleyan Tradition of doing all the good you can, in all the ways you can, at all the times you can, to all the people you can, as long as ever you can in her role as the bride of a Methodist minister.

In addition to being a loving, supportive spouse and mother to two adoring sons, Sue was an early childhood public school educator in the many communities she and George lived and served. She taught in Durham, North Carolina; Magnolia, Arkansas; Eugene, Oregon; Pine Bluff, Arkansas; Lake Village, Arkansas; Camden, Arkansas; and Dumas, Arkansas.

Although always an educator, Sue ended her role as a classroom teacher and turned her considerable energies toward a life of volunteer service. She was actively involved with United Methodist Women, Community Concerts, Court Appointed Special Advocates (CASA), Garland County Master Gardeners, and especially empowering other women through the P.E.O. Sisterhood. Sue enjoyed being a member of the Hot Springs Village Women’s Tennis Team and promoting locally sourced foods. Reading to the young cherubim at the North Garland County Head Start Program near the Cedar Mountain Boys and Girls Club was a weekly delight for Sue and a further demonstration of her love for all God’s children.

An avid traveler with a willing companion, George and Sue were able to visit every continent with the exception of Antarctica, but she did get within a stone’s throw of seeing emperor penguins in the wild. Most importantly, Sue built and sustained lifelong relationships with friends who have added life to her years and years to her life.

She is survived by her husband, George A. Tanner; son, Gary Tanner (Denise); son, Scott Tanner (Connie) and brother-in-law, Jim Tanner (Marilynn). The family would like to extend their thanks and admiration to the angels with Village Home Care, Greenwood Manor, and Mt. Carmel who have surrounded George and Sue with amazing nurturant care during this chapter in their lives.