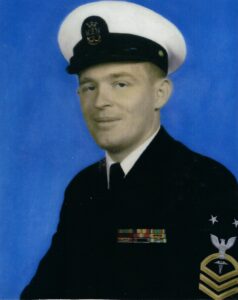 James Thomas (J.T. / Jim) Yarbrough, age 79 of Little Rock, Arkansas went to be with our Lord on Thursday March 3, 2022. He was born April 6, 1942 in Wright, Arkansas to Cloid Wesley Yarbrough and Ruth Irene Lay Yarbrough.

Jim attended Watson Chapel School in Pine Bluff, Arkansas and graduated from Watson Chapel High School in 1961. During his last two years of high school, he served in the U.S. Naval Reserve. After graduating from high school he enlisted into the regular Navy. Shortly after this enlistment, on December 26, 1961 he married his high school sweet heart, Patsy Christine (Chris) Bass. Together they served our country in the United States Navy for 22 years.

Of his 22 years of service in the United States Navy, Jim served two tours of duty in Vietnam. For his service he was presented with several awards and honors including The Vietnam Service Medal, a Combat Active Ribbon, a Navy Achievement Medal, and the President’s Unit Citation. He also received 5 Good Conduct Awards. He was also a Hospital Corpsman and served his country alongside the U.S. Marine Corps. During his military career he achieved the highest enlisted ranking office and retired from the U.S. Navy in 1981 as a Senior Enlisted Advisor, Grade E-9, Command Master Chief Petty Officer (CMDCM).

In addition to his service to our country, Jim also faithfully served our Lord in numerous church positions around the world and moved his family back to Arkansas in 1982 where he continued his honorable service to his church, Lord, and family. He had many talents including, but certainly not limited to being an antique clock repairman, carpenter, and computer whiz.

A private service for close friends and family will be officiated by Reverend Ken Thornton and Dr. Tandy Hanson at Center Missionary Baptist Church on March 8, 2022, followed by a commitment of Mr. Yarbrough’s soul unto our Lord at The Rowell Cemetery with Military Honor Guard.

Full obituary can be found at anaturalstatefuneralservice.com.