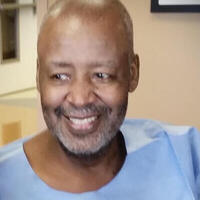 Rev. Ellis Jones, Jr. departed this life for eternity on September 6, 2021. He will truly be missed by his family and friends. He was born march 3, 1959 to Ellis Jones Sr. and the late Birdia George Jones in Helena, AR.

Rev. Jones confessed hope in Christ at an early age at Fredonia Baptist Church under the leadership of Rev. Steward.

He was united in holy matrimony to Lula Guy Jones on October 27, 1985. There were four children blessed to this union.

He was preceded in death by his mother, Birdia Mae Jones, his sister, Maxine Jones, his grandmother, Rosie Jones, and uncle, John Pitts.