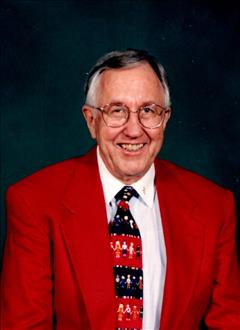 The Rev. Joe L. Sparks Jr. died on Sunday, Feb. 9, 2020 at Ashley Health and Rehab in Rogers, Arkansas. He was born at home on Feb. 19, 1926 to Joe L. Sparks Sr. and Mary Cordiela Lann Sparks in Fort Smith, Arkansas. He was preceded in death by his parents, two sisters Mary Joe Sparks, Mildred Law and her husband Eldon Law and his precious wife Tommye Mae.

Before enrolling at the University of Arkansas in the fall of 1945, he worked for a short time as a fireman on the Frisco Railroad. In the spring of ’46 he met a beautiful Pi Phi, Tommye Me Owen, from Marked Tree Arkansas. They were married on Aug. 17, 1947 in the First United Methodist Church of Marked Tree, which was their home for the next 61 years. Over the next 41 years, he worked as an assistant cotton buyer for E. Ritter and Co. managed a Bulk Oil Plant, 500-acre cotton, soybean and dairy farms; and owned and managed O-H Cleaners and Joe Sparks Chevrolet-Olds. He was active in his community serving as president of the Marked Tree Lions Club, Marked Tree Chamber of Commerce, and board member of the Marked Tree Industrial Committee. He served as Chairman of the Advisory Committee of the Delta Vocational Technical Institute and Regional Vice President of the Arkansas Automobile Dealers Association.

Joe was very active in the First United Methodist Church in Marked Tree. He served as Superintendent of Sunday School, member and chairman of the Administrative Board. He served as a lay leader, delegate to the Annual Conference, teacher of an adult Sunday School Class, and member of the Chancel and Hand Bell Choir. His dedication extended beyond the local church to the district and conference levels. He served as Lay Leader of the Jonesboro District and was a Certified Lay Speaker. He served on the conference committees of Lay Life and Work, the Episcopacy Committee, and the Chair of Diaconal Committee. He was proud to have been elected as a lay member of the 1988 General Conference. He was a board member of the United Methodist Children’s Home and served as Chairman of the Board from 1994-1996. It seems that his varied experiences prepared him for the ministry.

In 1988 at the age of 62, he answered his call to the ministry, which he had been denying for many, many years. He completed the Saint Paul School of Theology Course of Study School in Kansas City, Missouri and was ordained Deacon of the Little Rock Annual Conference in 1995. He was privileged to serve the churches of Bay Village/Farm Hill, Joiner/Terrell, and Parkview in Benton, Arkansas, Tyronza/Centerview and Joiner/Lepanto. Rev. Sparks completed 19 years of ministry and retired in 2007 at the age of 81.

Joe and Tommye Mae lived in Marked Tree for 61 years. They loved to entrain. Operations and illnesses did not deter them from enjoying a wonderful life. They moved to Rogers, Arkansas in 2008 to be near their children. At age 93 he wrote a book, “Tickled Tales-Untold Arkansas Stories from a 93 year Old Great Grandfather.” It was published and sold almost 100 copies. Through all the events of his life his devoted wife, of 69 years, was by his side. He always said, “That without her and the blessings of our Lord Jesus Christ he would have accomplished nothing.”