About five years ago, the Rev. Steve Poarch, of St. Paul United Methodist Church in Fort Smith, became concerned after noticing a large number of babies with unchanged diapers in his community.

“He really wanted to address this situation,” said Mary Huss, the chairwoman of the Diaper Dandies Ministry. “And because we have a large low-income population that comes in and out of our church, it was very common.”

“We have people that are looking for assistance frequently,” Poarch said. “They need help with rent or utility bills and we just happen to notice that several times they would bring their children and their diapers would be saggy and hadn’t been changed.

“One of the things we began to realize is if there is a financial crisis in the family, diapers, as expensive as they are, are not being purchased.”

The diaper ministry has been in effect for a little over four years now and it was just recently awarded a $40,000 grant from the Windgate Foundation. The grant will fund the ministry’s continued efforts to “improve the health and welfare of our community’s most vulnerable members by providing diapers, diaper wipes, and diaper rash ointment to families in need,” according to Poarch.

Poarch said, currently, the ministry distributes about four times a year and each distribution provides a two-week supply to an average of 100 infants and toddlers.

“Starting in 2020, we are going to move to six times a year thanks to the grant,” he said. “It will also help provide diapers to be on hand for emergency situations and provide for the education programs and parenting classes.”

Huss said the ministry will be fully funded for the next two years thanks to the grant.

“Thirty-six thousand of the grant will be used for the purchase of diapers, wipes and ointments and $4,000 will be used for parenting classes for the clients,” Huss said. “This grant will also allow us to extend our outreach to foster parents, schools and social workers.”

The parenting classes will be hosted by St. Paul through a partnership with Child Care Aware of Northwest Arkansas.

“We are going to help these parents understand issues of child welfare and potty training,” Poarch said. “The systemic causes of poverty is probably too large of an issue for one church to address.

“But we are trying to expand how we meet that need and reach out to our community.” 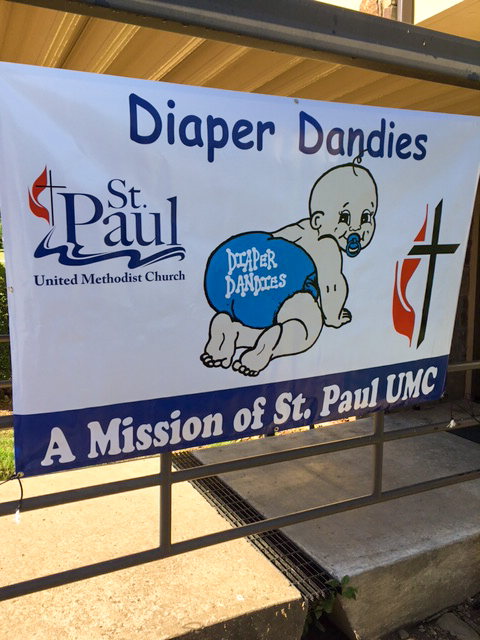 Huss said because she refuses to file and keep a lot of documentation, there aren’t many requirements for those who need diapers. People are asked to provide basic contact info and date of birth of the children.

“We determined early on that we would operate on the honor system,” she said. “And we would develop a sense of trust for these populations.”

Poarch said at the first distribution they served about 29 babies, some of which were multiple babies in one family. He said that it was a shock to be able to do that many.

“When we open the door at 10 a.m., there is already a line of people,” he said. “The response, the need, is overwhelming. If we advertise publicly, we could serve way more than what we are able to serve now – but the need is so much greater than what we can provide.

“We only have enough supplies for about 100 to 120 and if we had it listed on a public forum, we wouldn’t be able to keep up. The need is so great in our community, as I would imagine it is in a lot of communities.”

“Steve is a wonderful leader and he has a huge heart for outreach for this community,” Huss said. “He is wonderful, and very much has a servant’s heart.”

Poarch said the congregation is 100% behind this ministry.

“… I think we all feel that it is a blessing and fulfilling to be able to help. When we help these babies, we spend about $30 a baby, because diapers are so expensive. Because we are able to do this for a family, that’s $30 extra into their budget and many families have two babies, so that’s a $60 return.

“Which may seem like a small amount to many people, but to this population, it is a lot.”

Huss said the church also hosts a back-to-school supply carnival that consists of a new backpack for every child and school supplies.

She said they set it up with a series of games and after they play each game, they win a school supply, which includes a box of crayons, pencils, and binders for the older children.

“It is a joy to see those little faces,” she said. “We are very humbled by the response that we get from these families because it is not often they are given help, without having to prove anything.

“Their gratitude is a huge gift. It is always very satisfying when you can help those less fortunate. It is very rewarding work.”

Poarch said generational poverty is a huge issue, not only in the state but throughout the country.

“We know it is an issue in our community and people struggle to break the cycle of poverty,” he said. “It is a bigger issue than putting diapers on babies.

“If we can be compassionate and provide a little bit of assistance and a healthier situation – then that’s what we are called to do.”