Feeding the Hungry, Clothing the Naked, and Healing the Sick in Goshen 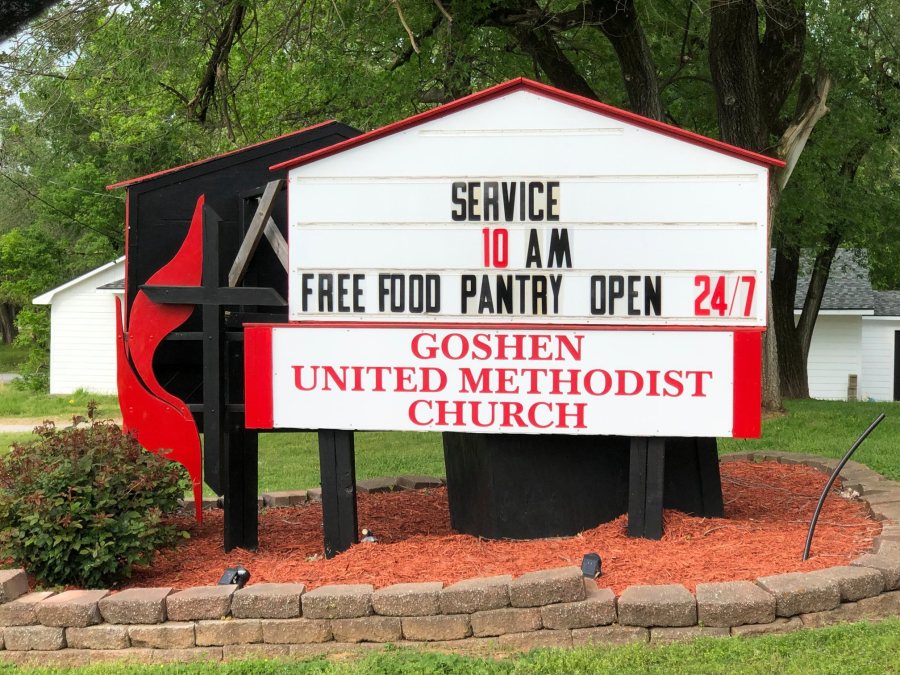 Most people assume that if you want to impact your community in a major way, you’re going to need a large congregation to do it. That way of thinking doesn’t seem to apply to Goshen UMC, a small congregation in the Northwest District that has managed to start a free health clinic, a food pantry, a community garden, and a blessing box to serve their small-town community.

The idea to offer these free services to the Goshen area came about after another initiative took off in the church to feed hungry children.

Becky Neighbors, District Administrator for the Northwest District, was invited by the Rev. John Humphries to come to the church and talk about how they could get involved in 200,000 Reasons, the Arkansas Conference’s initiative to end childhood hunger in the state.

“It was actually Andy Lowry who brought up the idea for a food pantry at one of our church board meetings. He said all we need to do is break down the walls between the people and food,” said Humphries, senior pastor of Goshen UMC. “Because there is plenty of food.”

Lowry has been attending Goshen UMC since 2012 and is currently on the Board of Trustees at Goshen.

“We had a food pantry before but we were having problems figuring out when we needed to keep it open so that people could take from it. We had a lot of food that went bad because of that.

“So we eventually decided to keep it open 24/7. You can come in at any time of the day and get something you need,” Lowry said.

The church began to keep the pantry stocked at all times for the community. They soon noticed that the food was quickly disappearing, which made them realize how needed this service was for their area.

“Pretty soon we got to know the people who were coming by to get food. They would leave us thank you notes and it turned into a really good deal for Goshen,” Humphries said.

One day, Humphries encountered an older woman who was coming by the pantry and taking lots of food back with her; more than she would need for just one person.

“I had no idea why she seemed to be taking so much food. It turns out she was taking food for her three daughters as well as her seven granddaughters that were living with her. She said they were going to bed hungry every night until the church started doing this.”

Humphries brought up this story to the Goshen congregation, which sparked inspiration in the congregants to start another initiative gathering socks, underwear and other clothing necessities — as well as feminine hygiene products — to provide to the community.

“I know the Bible is clear on feeding the hungry and clothing the naked. So I thought if we can start healing the sick, well then I’m going to retire again!” Humphries jokingly said.

What must have seemed like a lighthearted comment at the time quickly became a reality when Russell Stroud, a nurse practitioner who attends Goshen UMC, came up to Humphries after a meeting and offered to check patients for free.

“He had been looking for a way to offer a free health clinic for people in Goshen. And I said well, alright, let’s start healing the sick.”

On the second Tuesday of each month, from 8 a.m. – 4 p.m., Goshen UMC holds a free health clinic for anyone that needs to come in and get checked out by Stroud.

The church doesn’t advertise the health clinic — they simply display a sign on the front lawn of the church that says “Free health clinic” on Tuesdays — yet the response so far has been amazing.

“This is a little church but it’s a very loving church. Everybody wants to help.”

“We’ve had people tell us, tell Russell, that he is an angel sent from God because of this health clinic and the work that he is doing for this community,” Humphries said.

Judi Sartwell, chair of the Staff Parish Relations Committee at Goshen, got involved with the free health clinic because of her experience as a nurse for almost 30 years.

She said that a common problem with people who have low or no income is that they don’t have insurance and are afraid of visiting a health clinic and being rejected. The purpose of the clinic is to give them the help they need at no cost.

Stroud can even write prescriptions for patients or refer them to an emergency room if they are having a serious health issue.

“We just started last month, but I have a feeling that when the word gets out, this is going to grow by leaps and bounds,” Sartwell said.

Humphries said the reason the church has been able to provide so many free services is that they didn’t go into any of these projects worrying about how they would pay for it all.

He said they have a few fundraising events throughout the year, such as an annual crawfish boil, that help pay for some of the expenses, but most of the funding for these projects comes from the generosity of people in the church.

Lowry said they are able to accomplish so much because they have a congregation that is eager to get involved in anything they can.

“We have a lot of natural leaders and self-starters in our church. They are people that see a need and then take care of it,” Lowry said. “It’s not just a place where you come a few Sundays a month and then leave and aren’t heard from again; well over half the church is involved in some sort of volunteer or mission work.”

Stroud, who has a fulltime job as a nurse practitioner in Northwest Arkansas, donates his time to the free health clinic; Humphries said the church doesn’t pay him anything to run the clinic.

“He said that’s his time to give back. He doesn’t want anything in return.”

That’s also the way Humphries looks at these ministries; it’s not about getting something in return — like increasing the number of people you have in the pews on Sunday mornings — it’s about serving your community in any way you can.

“We are trying to become an active part of our community. And I think that, in itself, will bring more people to Christ.”

Sartwell said she’s constantly amazed at the willingness of her church to get involved and help their community.

“If we have 50 people on Sunday morning, that’s a good Sunday for us. This is a little church but it’s a very loving church. Everybody wants to help,” Sartwell said.

For Humphries, the size of the church isn’t a barrier to accomplishing big things. He said all you need is people who are willing to start somewhere.

“Start small and start with what you can actually do. Start with a food pantry and if that works out, see what else you can do. We didn’t say we were giving out free medical care every day forever. We said we’d start with one day a week. But you know we’re still going to help somebody in a big way that one day,” Humphries said.