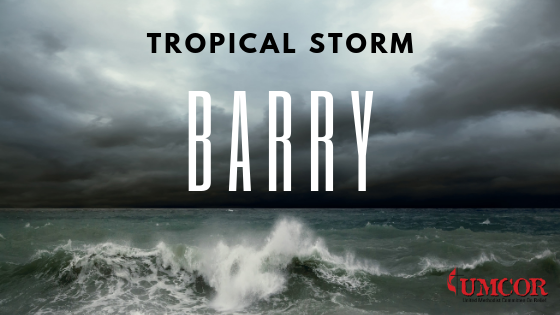 As Tropical Storm Barry threatens the gulf coast, please join us in prayer for those that have already been affected by heavy rainfall and flooding.

UMCOR is in close communication with disaster response coordinators in the region. As we continue to monitor the progress of the storm and its potential impact, we will share ways in which you can help.

Tropical Storm Barry made its way slowly through the state on Monday and Tuesday, dumping a dangerous amount of rain that led to flooding and closed roads in many Southern counties.

According to the Arkansas Democrat-Gazette, Tropical Storm Barry — which was downgraded to a Depression when it made its way to Arkansas — released more than 11 inches of rain in a 24-hour period in portions of Southeast and South-Central Arkansas. A majority of the flooding occurred in Howard and Clark Counties.

Janice Mann, disaster response coordinator for the Arkansas Conference, said that many streets and roads were affected by the rain.

A few churches in the area were also affected, including flooding in the basement of Gurdon UMC.

In Nashville, Arkansas, many homes and businesses were affected by the flash flooding late Monday night into Tuesday morning. The county jail, as well as the Nashville Police Department and City Hall, were damaged by flooding, according to the Democrat-Gazette.

The Rev. Daniel Kirkpatrick, pastor of Nashville First UMC, said he is grateful no one has been injured from the flooding and the church is now in recovery mode and focused on cleanup.

“Byron Mann is on his way today, July 17, from Conway to deliver flood buckets for our church to distribute for Nashville and communities in Howard County,” Kirkpatrick said. “Our DS, the Rev. JJ Galloway, has also reached out to offer help and support. First Methodist Church was built in 1982 on high ground so we are grateful to God we were spared any damage.

“We appreciate the prompt, compassionate, and practical response and prayers from our Methodist sisters and brothers.”

Mann said they are continuing to monitor the situation in Howard, Clark and other counties affected by flooding, and will give updates on volunteer and clean-up opportunities at a later time.

Continue watching this post for updates on the storm.