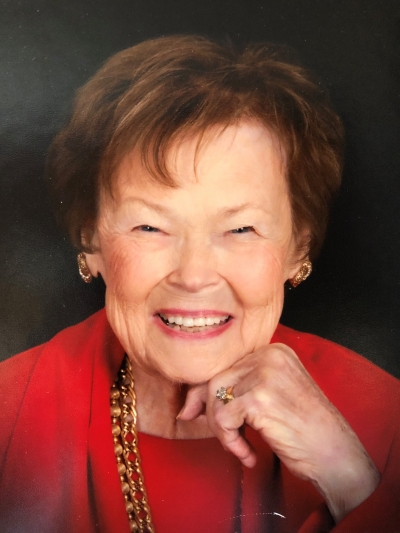 Lila Elaine Hicks was born in Scottsbluff, NE, March 30, 1926 and died June 29, 2019, at her home in Little Rock, AR. Elaine was pre-deceased by her husband, Bishop Kenneth Hicks, and son-in-law, Wayne Gottschalk. Her survivors are daughters Debra Gottschalk of Topeka, KS, Linda Hicks of Cabot AR, granddaughter Dr. Kiley Gottschalk (Oren Lee-Parritz) of Waltham, MA, grandson Spencer Gottschalk of Topeka, KS. She became a true Nebraska girl, living in cities throughout the state under the loving gaze of her mother, Martha Magnolia (Nolia) and an abundance of grandparents, aunts, uncles and cousins who helped define and shape her into a woman who cherished “family.” While attending York College in York, Nebraska, where she pursued teacher education curriculum, she attended an event, in the fall of 1945, where a student by the name of Ken Hicks was the Master of Ceremonies. She mentioned to a friend she rather liked him. Two days later he called her, they went on a date, became engaged in November 1945 and were married Aug. 11, 1946. After being married nearly 73 years, they decided it was going to last.

The life of a minister’s wife was one of adapting, listening, extrapolating, being creative, being objective, being politically correct, knowing and being social…all while modeling love, grace, intelligence, wisdom and discipline for her daughters, so they could become the best people they could be. With passion, organization and fortitude, she orchestrated the residential moves which occurred about every four years into parsonages in a variety of floor plans and conditions and communities of various personalities. Working was necessary, so she became a Jill of many trades…a dental assistant, a doctor assistant, a kindergarten teacher, an administrative assistant…and a Master of all. Her love of music and wonderful organizational skills enhanced many roles in the churches.

In the role of a Bishop’s wife, she added another job to her resume. Her support of Ken, through facilitating meetings for Bishops and spouses, organizing conference events, organizing Ken for travel…and life, actually…, providing counsel to him, and participating in all facets of the Episcopal wife’s duties rounded out the job description.

When the grandchildren were born, life became even richer for her. She guided them with love and joy, becoming the MaaMaw these children needed to navigate this life.

Elaine belonged to many civic and church organizations, including being part of the first group of people serving as proud volunteers at the Clinton Presidential Center and being a member of P.E.O. Through these opportunities, she brought cherished, enduring friendships into her circle of life’s abundant gifts.

Animals…she loved them all, from rescued baby birds, to feral cats to not feral cats, to butterflies, to parrots, to dogs. Abby, her rag doll guardian cat of the last five years, was a magical gift, a touchstone for Elaine in good, bad and “It’s OK” times, a spirit dashing between bedrooms, care-taking her beloved people.

A village of people walked with Elaine through the last phase of her life, including caregivers Andrew, Celeste, Curtis, Debbie, John, Latonia, Lucille, TJ, and Arkansas Hospice. The family offers profound appreciation for the respect, kindness, generosity and compassionate care she was given.

Elaine Hicks was probably more than anyone knew, most always giving the stage, the credit to her successful husband. However, he would not have been who he was or what he accomplished…nor would her children and grandchildren…without this woman of intelligence, resilience, wisdom, humor and love…a river of deep, generous love.

In lieu of flowers the family suggests donations be made to organizations close to Elaine’s heart:

An animal rescue organization of your choice.

A celebration service honoring Elaine’s life as she transitioned and a service of thanksgiving and resurrection for her husband, Kenneth Hicks, were intertwined, as were they, at Pulaski Heights United Methodist Church on Friday, June 28, 2019.

Funeral arrangements were under the direction of Ruebel Funeral Home, www.ruebelfuneralhome.com.