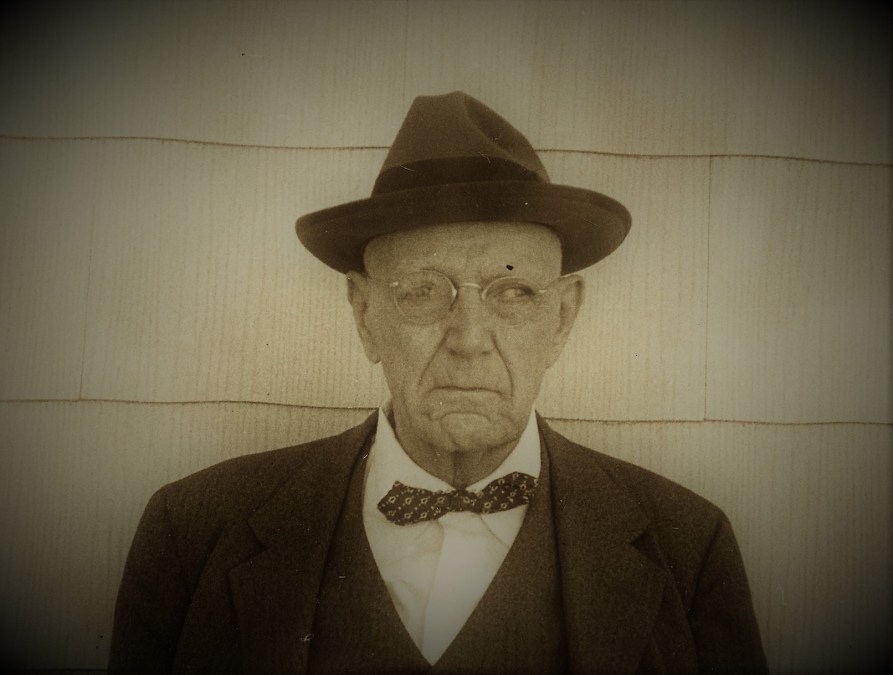 My great grand uncle, the Rev. Martin Luther Mathews, stands as a giant among those early Wesleyan leaders in the Methodist Protestant Church. He had a burning fire in his heart and a burden to help his fellow man. In fact, everywhere he went he would share the gospel not only in words, but in deeds. One quote that he would use consistently was from a poem, “Christ has no hands but our hands to do His work today- -.” (Annie Johnson Flint 1919; The World’s Bible)

Rev. M. L. was born in true pioneer fashion in Johnson County, Arkansas on Sept. 23, 1875 to John J. and Isabelle (Barnette) Mathews. Martin was the eldest of four sons born to the family. Before John J. married Isabelle, he was married to Mary Jemima, in which they had eight children; (one of their daughters Mary E. married my great grandfather, Wiley Bunch). It was the death of his mother in 1888, that brought deep changes to the family. According to M. L., “In losing her (his mother) I lost the most important factor in my life. My father was not a Christian although he did become one later. For four years after Mother’s death, I did not follow her teaching but kept bad company. I had never attended revival meetings for the reason there had been none held in the communities where we had lived.” It was four years after his mother’s passing that he attended his first revival meeting, at the school house in Sevier County in 1892.

The evangelist was a Baptist preacher named Brother Denson, and it was during those meetings, while under deep conviction, M. L. came to surrender his life to the Lord. He became deeply concerned about spiritual matters and at the age of 27, he answered the call to preach. As a preacher, M. L. was a very humble and unassuming gentleman. According to the Rev. L. Gardner Griffin, who penned Sycamore Chapel: A Most Unusual Country Church, “M. L. Mathews did not look the way I expected a conference president to look. His suit was baggy and needed pressing, a condition that I was to see on him many times in the next few years. He was a large, rawboned man with a lined and craggy face, an Abraham Lincoln type but without the whiskers. He had one glass eye that did not always track straight with the natural eye. I don’t know about the others, but I was, to say the least, disappointed. It had been some time since the meeting closed. I was hungry to hear a good sermon and had been expecting one, (sic) but looking at this man I was not at all sure that he could deliver. But … Rev. Mathews was a powerful speaker, and as I came to know in time fully as dedicated as the Rev. Goodnight. That first night his unprepossessing outward appearance was soon forgotten as we were caught up in his message.”

This same attitude was carried in various newspaper clippings concerning different meetings he would conduct at various locations, one article mentioned that the Rev. M. L. Mathews, “…who already held two very successful revivals this year, will begin a two weeks’ meeting at Eagletown Aug. 15, (1920). Professor D.L. Grace will conduct the singing. A great meeting is predicted, signed Revival Committee.” He was a mighty and marvelous messenger of the gospel. It was during his evangelistic excursions that he encountered several that would try to interfere with the meetings and reading his brief autobiography one can see the tact and grit he had to confront and dismiss these situations.

Rev. Mathews not only served as President of the Fort Smith – Oklahoma Conference of the Methodist Protestant Church for 19 years (from 1916-1935); but he served as a minister of the gospel for 60 years. His other accomplishments consisted of, “1,500 conversions, have organized or helped to organize 15 churches; have built or sponsored the building of 17 churches; sponsored the building of three tabernacles for revival work; taught in 11 different schools and had five of his pupils become preachers; licensed 70 individuals to preach and have helped ordained a large number as well.” (autobiography)

His preaching was powerful, but rational and reasonable; the main thrust of his mission was to see men, women, boys and girls saved and sanctified in their service to the Lord. It is no doubt that M. L. would make a deep spiritual impact every time that he would speak about the Lord. I believe the reason why God used him as He did, is the fact that lived in an atmosphere of prayer and always sought after doing the Lord’s work. He desired to be the best he could be by going to the feet of Jesus where the only true scholarship is learned. He would spend many hours with the Holy Bible and desired to read it. He never forgot his humble beginnings and always blessed the continuing work that he did. Even though he passed away before I was born; I know that this is what my great grand uncle has taught me: We as a blood-bought people need to preach the Blood of Christ, the Fire of the Holy Spirit and give our testimony as a witness of what the Lord Jesus Christ has done for us.

One thing that I do find quite fascinating is his great love for the History of Holiness, and his meticulous records of research that he shared with authors putting together the history of the Methodist Protestant Church. M. L. also had a chance to hear some of the “great and near great” evangelists in his day, Sam P. Jones, J. B. Culpepper, and even Billy Sunday, the baseball evangelist. I am looking forward to meeting him one day on that golden shore.