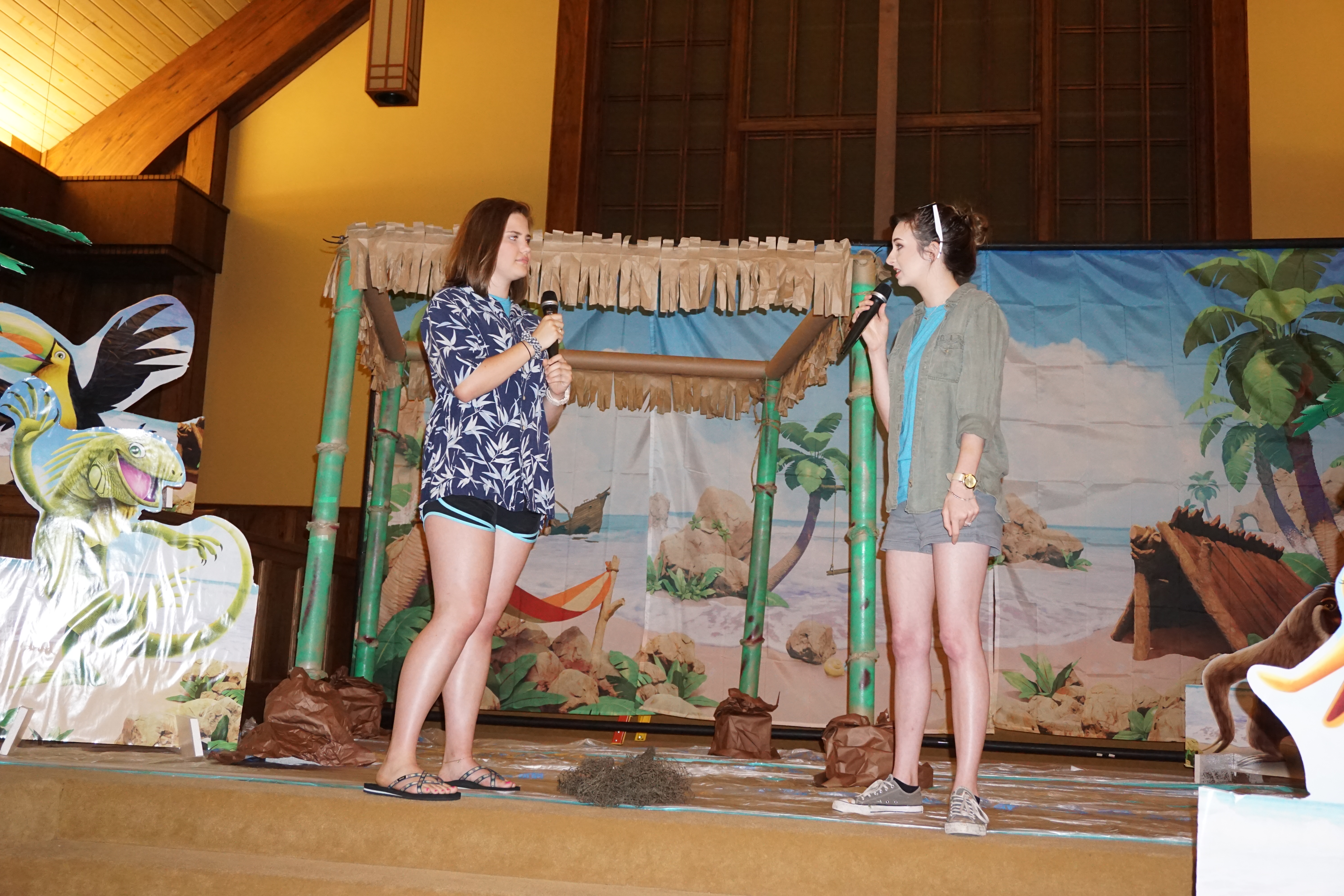 Libby Tyson, left, of FUMC Hope and Elizabeth Cowart, right, of FBC Hope put on a skit and lead the starting and closing sessions of the ecumenical VBS.
|| Photo provided by Melinda Shunk

The definition of ecumenical is promoting or relating to unity among the world’s Christian churches. Rose Gagon is doing precisely that at First United Methodist Church in Hope for the second summer in a row! In 2017, Rose met the new Baptist pastor of First Baptist Church of Hope at a community event. As she and Brother Daniel got to know each other, Rose mentioned how nice it would be if they could join together to hold their Vacation Bible School. Not in a way that they share supplies, but in the way of combining volunteers and VBS campers into one large VBS. Brother Daniel thought that would be a wonderful idea and suggested it to Sara O’Brien. Sara is the “full-time volunteer” for Children’s ministry at First Baptist Church of Hope. She soon met with Rose, and they began planning for the 2018 Vacation Bible School.

During their planning meeting, many things had to be decided, but first, it was a commitment plan. They decided because this has never been done before they would need to have a two- year commitment to the Ecumenical VBS to work out the kinks and give everyone a chance to experience the positive results of change. It was a smart decision and kept the lines of communication very open between Rose and Sara, the now co-directors of Vacation Bible School. The next decision to be made was where to hold VBS, but that was not difficult because the Children’s wing at First Baptist Church of Hope was under renovation. So, it made perfect sense to hold the first Ecumenical VBS at First United Methodist Church for the first year with the 2019 VBS scheduled to be held at the First Baptist Church. They then had to compromise on the timing. First Baptist always did their VBS in the evening, and FUMC did theirs during the day for four days. They combined ideas and held VBS in the evening for four days and found that it was very beneficial for getting the whole family involved in programming because parents were home from work. The co-directors found that as they planned, their resources grew. They grew because they had more volunteers to place in just the right role. They also found when they ordered supplies, their money went further when they ordered in bulk. The extra money allowed them to purchase a VBS shirt for all the campers to enjoy for free! 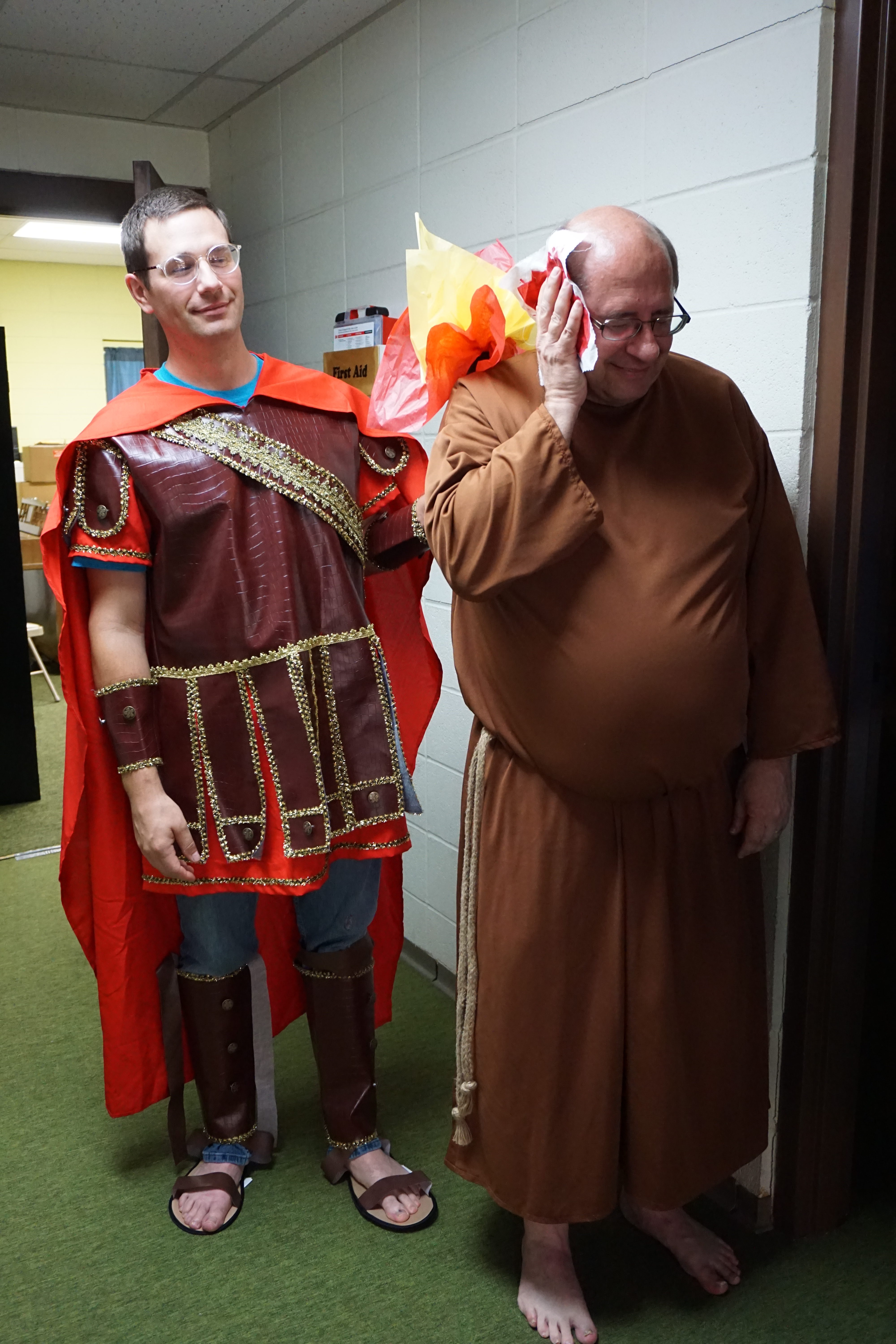 The co-directors might be getting along just fine, but you may be asking how the campers and the volunteers experienced the same collaboration? The Holy Spirit was working that first Ecumenical VBS because no one was upset about going to VBS with their neighbors. It increased their attendance and ability to work together. The kitchen teams were asking their Baptist friends to work with them before the directors even got the phone call made. The youth group that serves as assistant crew leaders were excited to work with their friends from school. The VBS campers just knew they had enough kids to play a solid competitive game during the sports rotation. VBS campers had no idea what volunteers were from which church because they all wore an Ecumenical VBS shirt made special for the week. Rose said that everyone had the mindset that God is a loving God. God brings us together, and that was and is the focus of 2018 and 2019 VBS.

The host church handles the online Google forms for registrations, but together they share publicity with both churches’ names on everything that goes out. They post it on the Baptist digital screen, on each other’s Facebook Pages, flyers that go to the school and into backpacks, and the directors even host a night at the community Farmer’s Market to promote VBS sign-up and registration. VBS is free for all who want to take part. Last year, they had 104 kids and 60 volunteers. This year, they hope to increase outreach numbers by 30-40 kids!

Rose and Sara agree that a wonderful addition to ecumenical VBS is having two pastors take part in everything, even getting a balloon in the face during the last night of festivities. Their 2019 VBS is scheduled for June 24-27, and they will include a third church into the VBS program! A Place of Meeting is a non-denominational church that will be joining in the planning and preparation. Brother Nathaniel Crane, who leads A Place of Meeting, witnessed the success of last year and asked to join in ministry this year. So now everything, from food to decoration supplies, is being split three ways. They may even have to get the vans ready to bus some kiddos into VBS! After one year, the ecumenical idea from two churches has grown to three. God’s love for us is big, but God’s love has an even bigger impact on making disciples when we come together as one body of Christians!