Daily Digest – Saturday, June 1
One resolution passes, one fails on the final day of Annual Conference 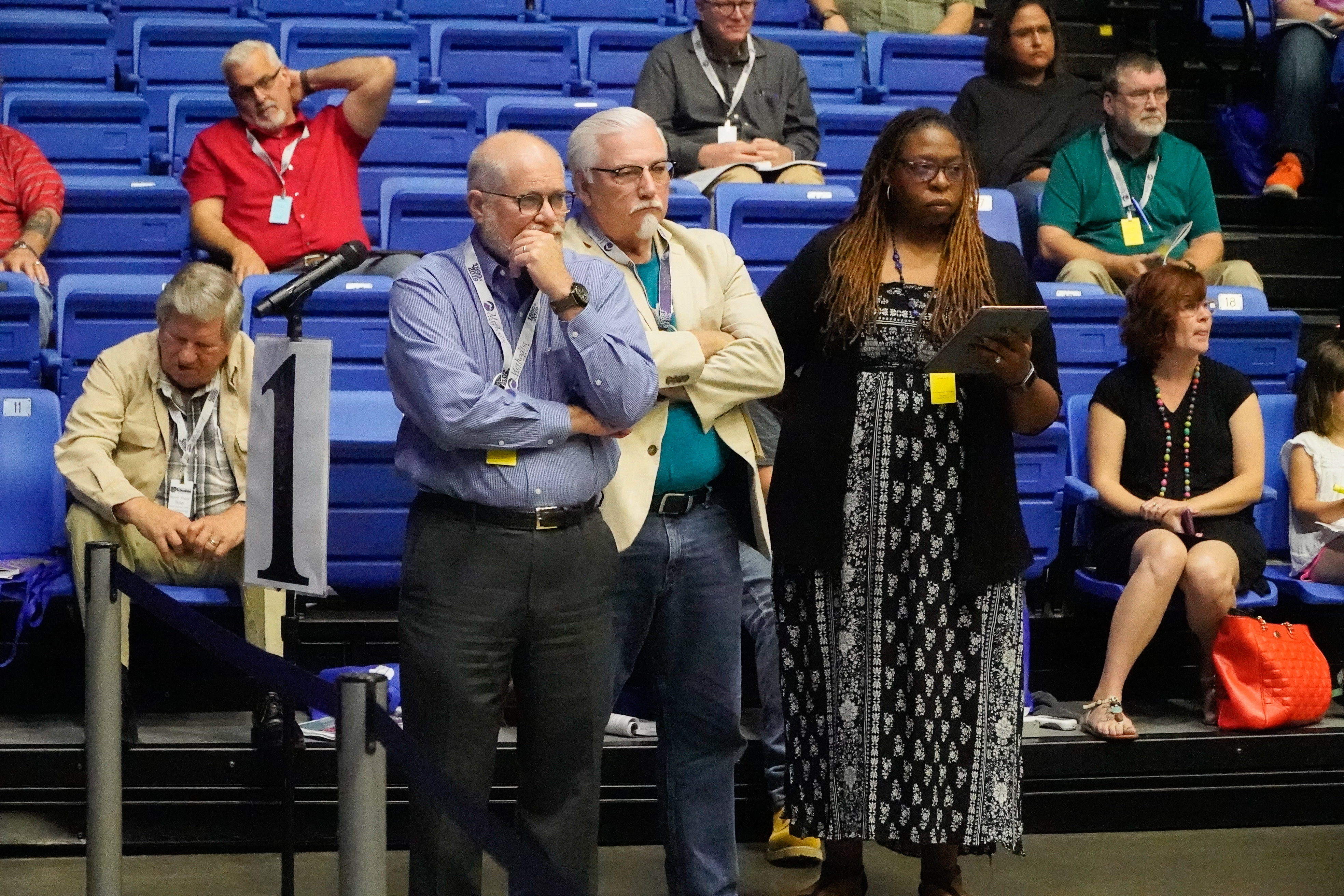 On a day that’s typically on the lighter side for business, the Arkansas Annual Conference had to modify the agenda at the last minute to fit a few necessary business items into the last day of Conference.

The first resolution of the day was presented by the Rev. Katie Pearce and proposed a raise in the amount of weeks that clergy are afforded for vacation time. Currently, most clergy are given two weeks of paid vacation for the first five years in the conference and four weeks after 10 years. 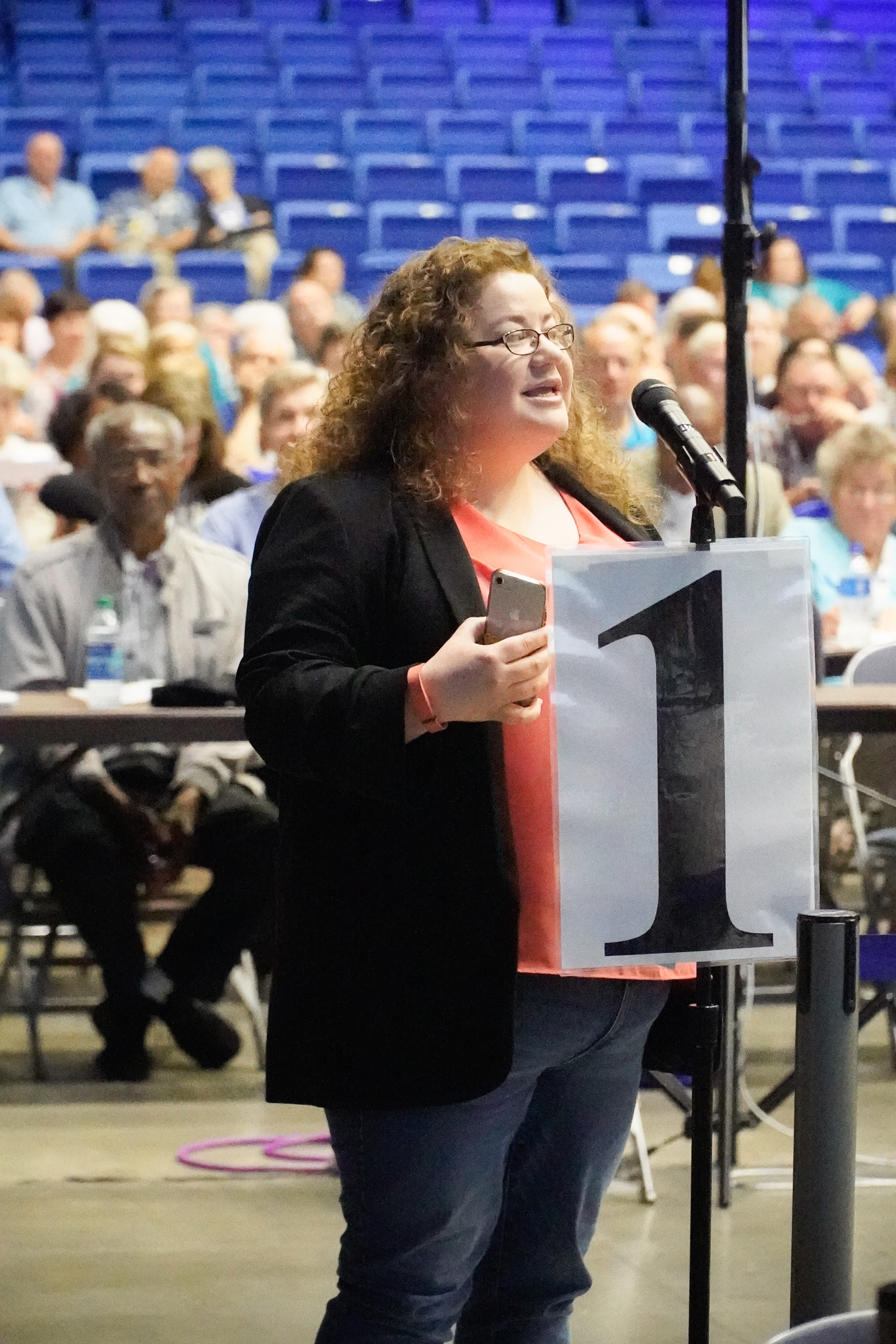 The Rev. Katie Pearce makes the case for a resolution that would increase clergy vacation time.

The resolution aimed to raise the vacation time to four weeks for all clergy, no matter the amount of years spent in the Conference.

The resolution was noted to be non-binding — meaning that if it passed, no church or SPRC would be required to implement the policy — but Pearce noted that it was more of a way to encourage the increase in vacation time, not mandate it.

The Rev. Chase Green, senior pastor of Primrose United Methodist Church, in a speech in favor of the resolution noted that while attending Wesley Theological Seminary, he learned that self-care and soul-care are essential for a healthy pastor and a healthy congregation.

A few others, speaking against the resolution, said that this kind of policy is already in place in many SPRC’s, but laity and clergy need to learn to work together to make sure it gets implemented.

After taking a vote on the resolution, the increase in paid vacation time for clergy was adopted.

The second resolution of the Conference was submitted by a group of Central District pastors and laity, and called for the immediate suspension of the United Methodist Church motto “Open Minds, Open Hearts, Open Doors,” in light of the decision at General Conference 2019 to maintain the Book of Discipline’s current stance on human sexuality.

Kyle Forehand of Pulaski Heights UMC noted that this resolution is not calling for the permanent suspension of the motto, but only a temporary one and could be reinstated if the denominations stance on human sexuality were to change.

Others, such as the Rev. Clayton Bulice of Hazel Edwards Memorial UMC, said that the adoption of this resolution is unnecessary since his church and many others in the Arkansas Conference still follow the idea behind “Open Hearts, Open Minds, Open Doors.”

Still others shared personal stories of family members and friends who have felt hurt after the adoption of The Traditional Plan at General Conference.

The Rev. Angie Gage, senior pastor of Cherokee Village UMC, said she has a 25-year-old daughter who is a part of the LGBTQIA+ community. Her daugher has been to churches where she has been snubbed because of who she is, and therefore she supports suspending the motto.

The Arkansas Chapter of The Methodist Federation for Social Action presented the Lucy Foster Award to Harold Hughes of Quapaw Quarter UMC. 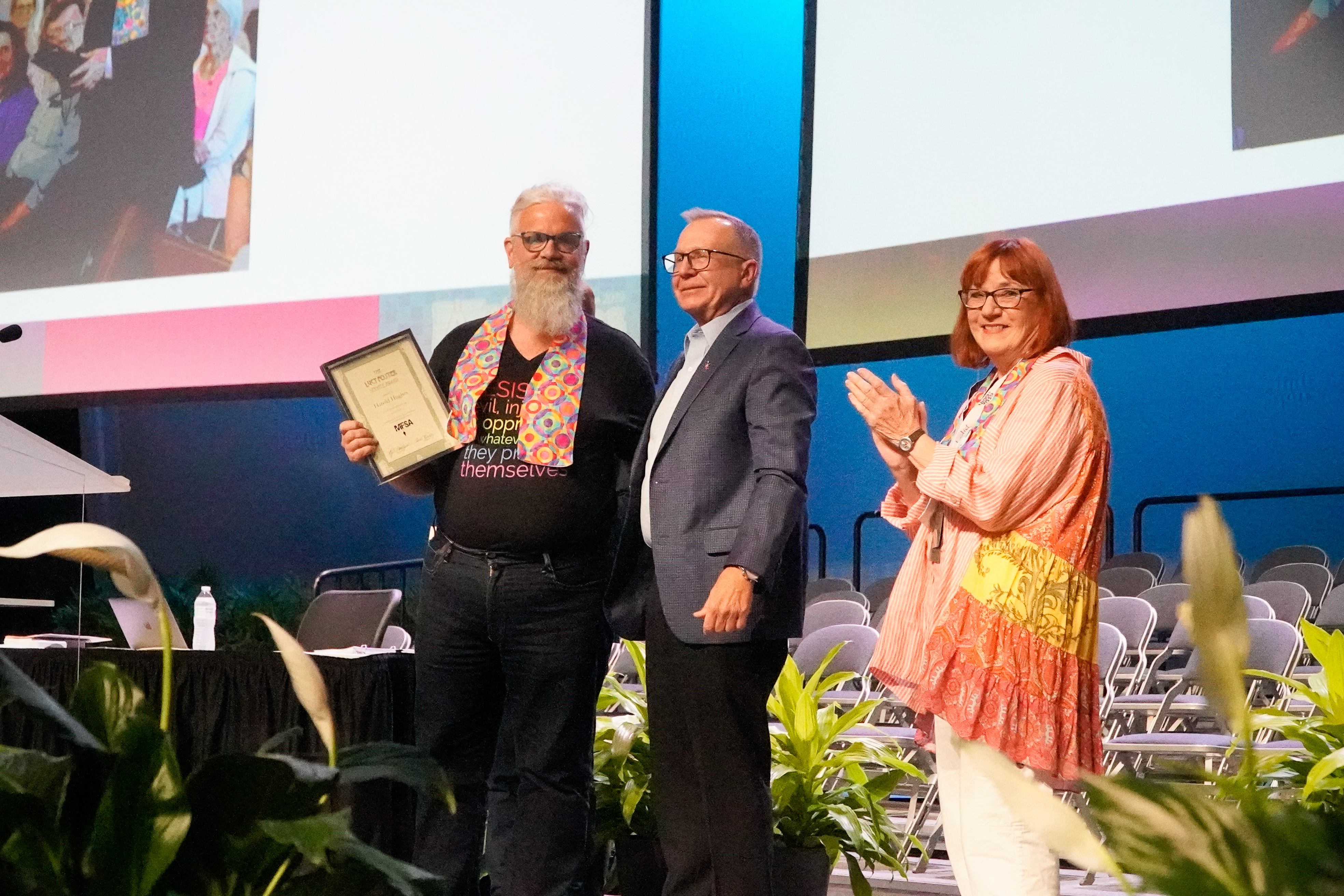 The Lucy Foster Award is given to one Arkansas United Methodist each year who demonstrates a concern and care for social justice in their communities. The award was presented by Kyle Forehand, who is the great-grandson of the awards namesake.

After a contentious introduction the day before to a proposed $3.2 million purchase for a new church start in Centerton, the body of voters at the Conference were given a change to ask questions about the deal and raise any concerns they had.

The new church start is located at a soccer complex near the middle of town. The 45-acre plot of land is made up of multiple soccer fields and an indoor practice facility that will be converted into the new building for The Vine Church. 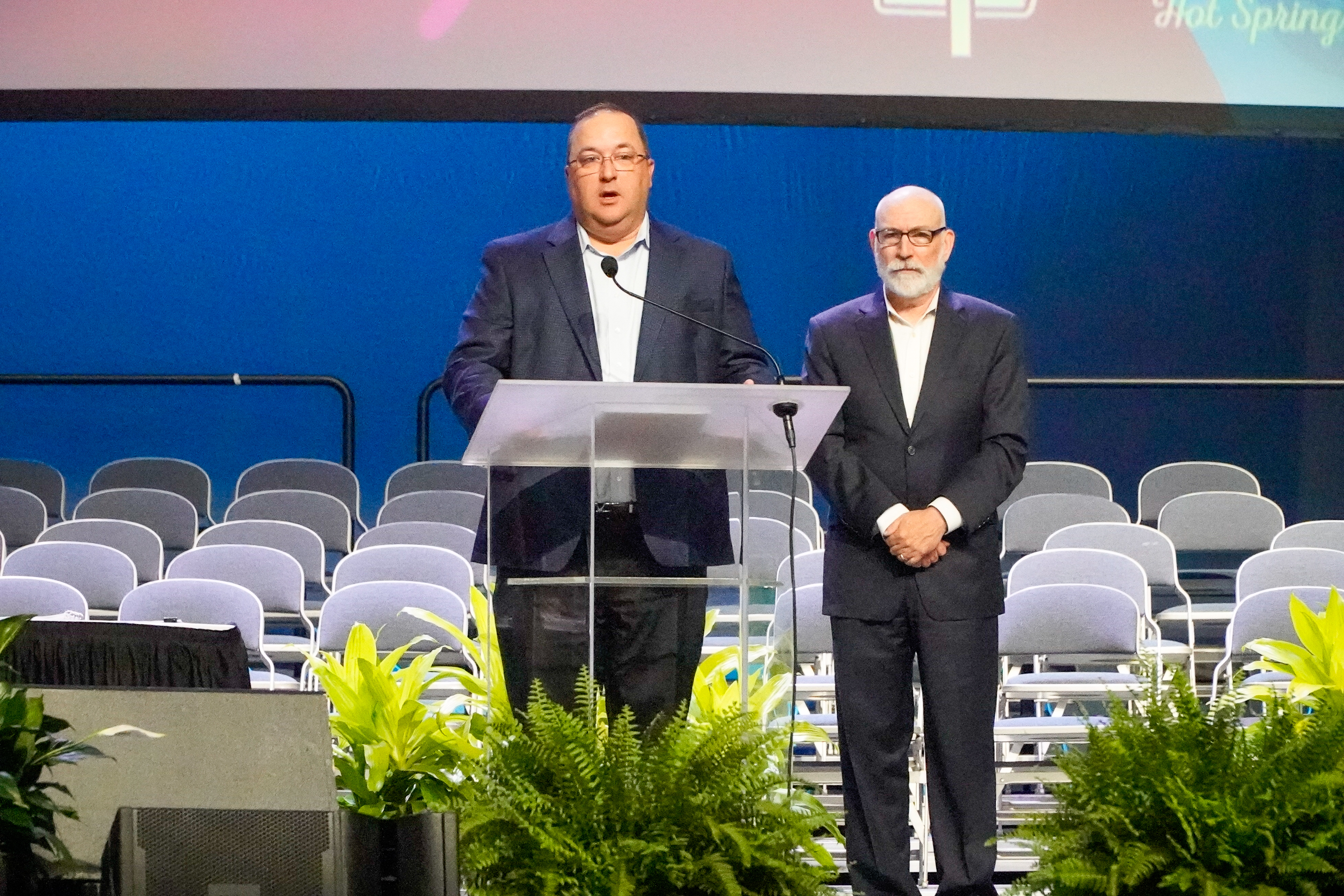 The new church will be about two miles away from Living Waters.

The Rev. Stephen Coburn, Northwest District Superintendent, and Conference Treasurer Todd Burris answered questions related to the land purchase, and assured the body that a written report from the Board of Trustees will be sent to members of the Conference sometime after the conclusion of this year’s event.

After the Rev. Rodney Steel made a motion to vote on approving the purchase of the Centerton property, the motion passed by a slim margin, 52.01% in favor and 47.99% opposed.Due to a lack of time left in the agenda, the reading of this year’s appointments was shortened but those interested will be able to read the full list of 2019 appointments on the Conference website at a later date.