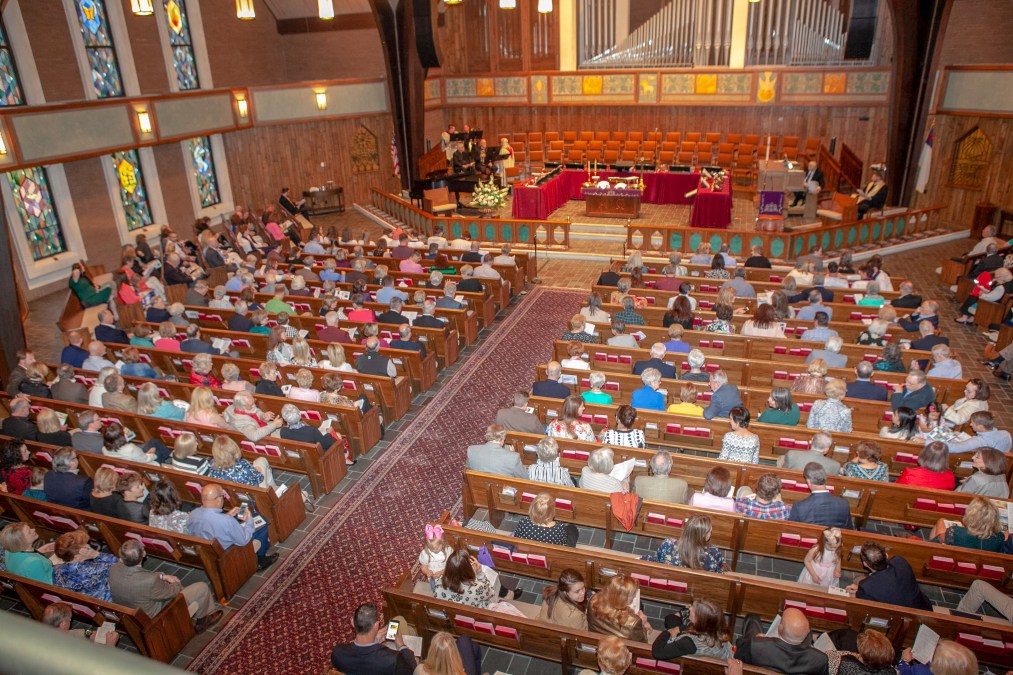 In April 2018, St. James United Methodist Church of Little Rock began a year-long celebration of 50 years in ministry for Christ. As the planning for this anniversary began, the committee wanted to honor the past and look forward to the future. Four large events were held throughout the year along with numerous other projects to help accomplish this goal.

St. James began a year-long celebration of its 50th Anniversary with a Handbell Concert on April 15, 2018 in honor of Martha Lynn and Felix Thompson. Words cannot express the appreciation and respect we have for Martha Lynn and Felix. They were instrumental in starting the music program at St. James. In addition, Martha Lynn developed a system of teaching handbells so that even those with no music reading ability could share their love of Christ through music. For more than 30 years, the Thompsons saw at least two generations of St. James members grow, learn, have fun, and become family together. 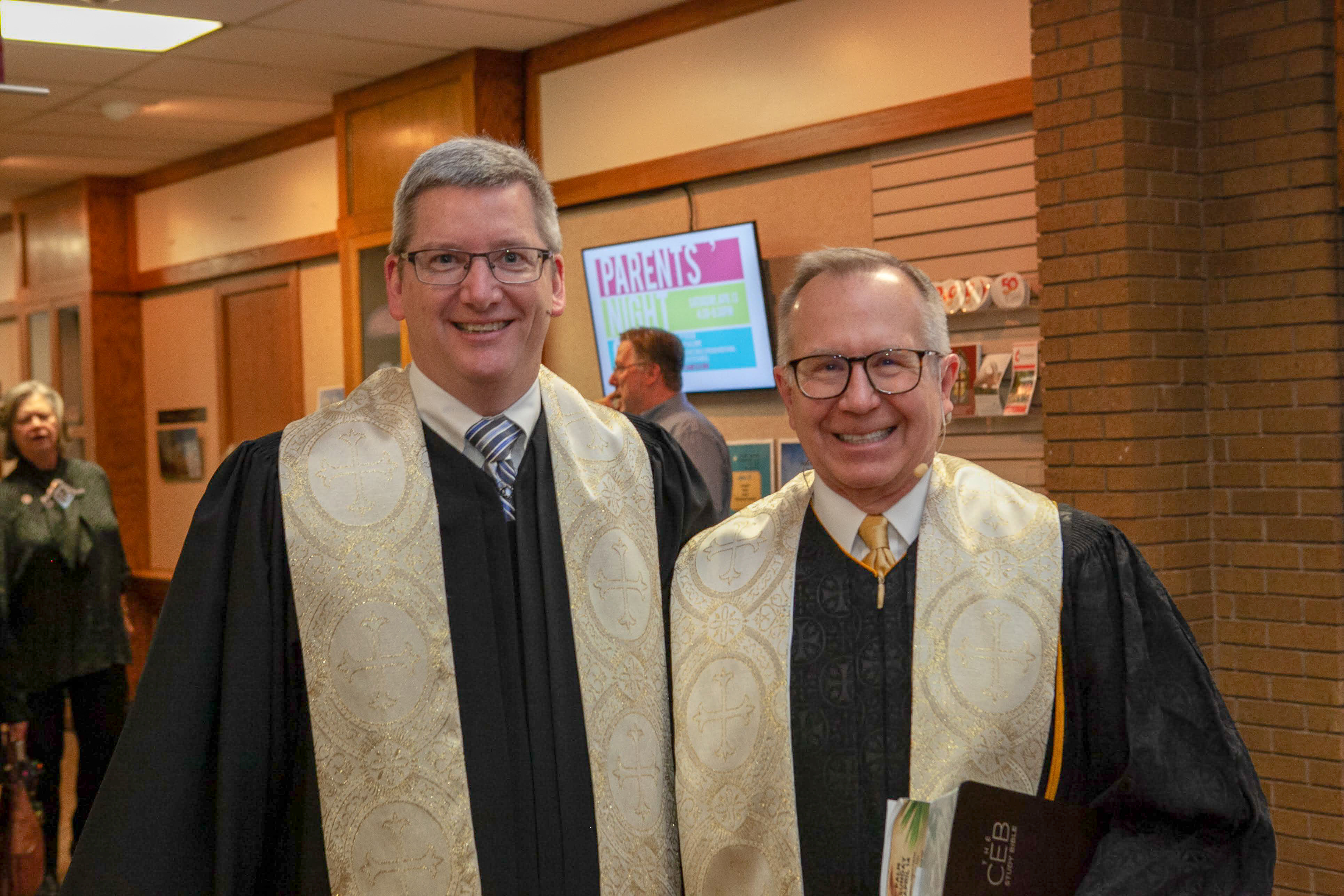 Through bell choir trips, musical recordings, publishing of music, and their love of God, children, youth and adults have come to know Christ and appreciate music. At the concert, each of the current handbell choirs performed at least two pieces of music that were arranged either by Martha Lynn Thompson or Frances Callahan. A special commissioned piece, “What Gift Can We Bring,” was played by the Canticle Ringers, and was written by Jane Marshall and arranged by Hart Morris. One of the biggest joys of the afternoon was to see the Alumni Ringers. Thirteen individuals came together to ring once again in honor and appreciation of Martha Lynn and Felix. Another joy of the day was to see the Rev. Greg Schick interview the Thompsons.
The second large event was a 50th Anniversary Homecoming Lunch on July 8. Charter members and former pastors were invited to join us for special worship services. Following the worship services, a lunch and program was held in the Christian Life Center. The Praises Band, Chancel Choir, and St. James Ringers provided the music. We had a wonderful time looking back at St. James through the decades. Members who joined St. James in each decade shared memories and highlights of their years at St. James.

Thursday, August 9 St. James members joined together to provide the children at Methodist Children’s Home the Best Day Ever! The residents at Methodist Family Health came to St. James to enjoy games, face painting, water games, inflatables and of course lunch. As a special treat, a shaved ice truck was available for all to enjoy. The first worship service of St. James United Methodist was held in the chapel at the Methodist Children’s Home. We share a rich history of mutual support, encouragement, and mission. This was an awesome day enjoyed by the residents, staff, and members of St. James. New connections and opportunities for joint ministry came from this event.

The year-long celebration of the 50th Anniversary of St. James concluded with a special worship service and luncheon on Sunday, April 7. Bishop Gary Mueller preached at the 10:55 a.m. services) along with music from the early days of St. James. Music Director, Kira Keating, went through the archives to find the very first anthems and hymns from St. James’ inception. In the traditional service, there was a combined children’s and youth anthem as well as the brass quartet that accompanied much of the service, all arranged by our own Children’s Music Director, Kyle Blackburn. The bells played the 50th anniversary commissioned piece. A commissioned benediction song in honor of the 50th Anniversary was heard for the first time.

Following the special worship services was a church-family lunch in the Christian Life Center. The theme for this event was Stepping Forward Together in Faith. Young couples shared with us why they are excited about the future of St. James and their dreams for their church in the future.

Throughout the year, other activities and project were undertaken. One was a second-mile Anniversary Gift campaign. In March of 2018 & 2019, members were invited to give $50 plus $5 a year for every year of membership at St. James. This second-mile gift would be split evenly between Methodist Family Health Chapel Campaign and retiring the St. James debt. This was done to honor our past (Methodist Children’s Chapel) and prepare for the future. To date, over $115,000 has been donated towards this campaign. 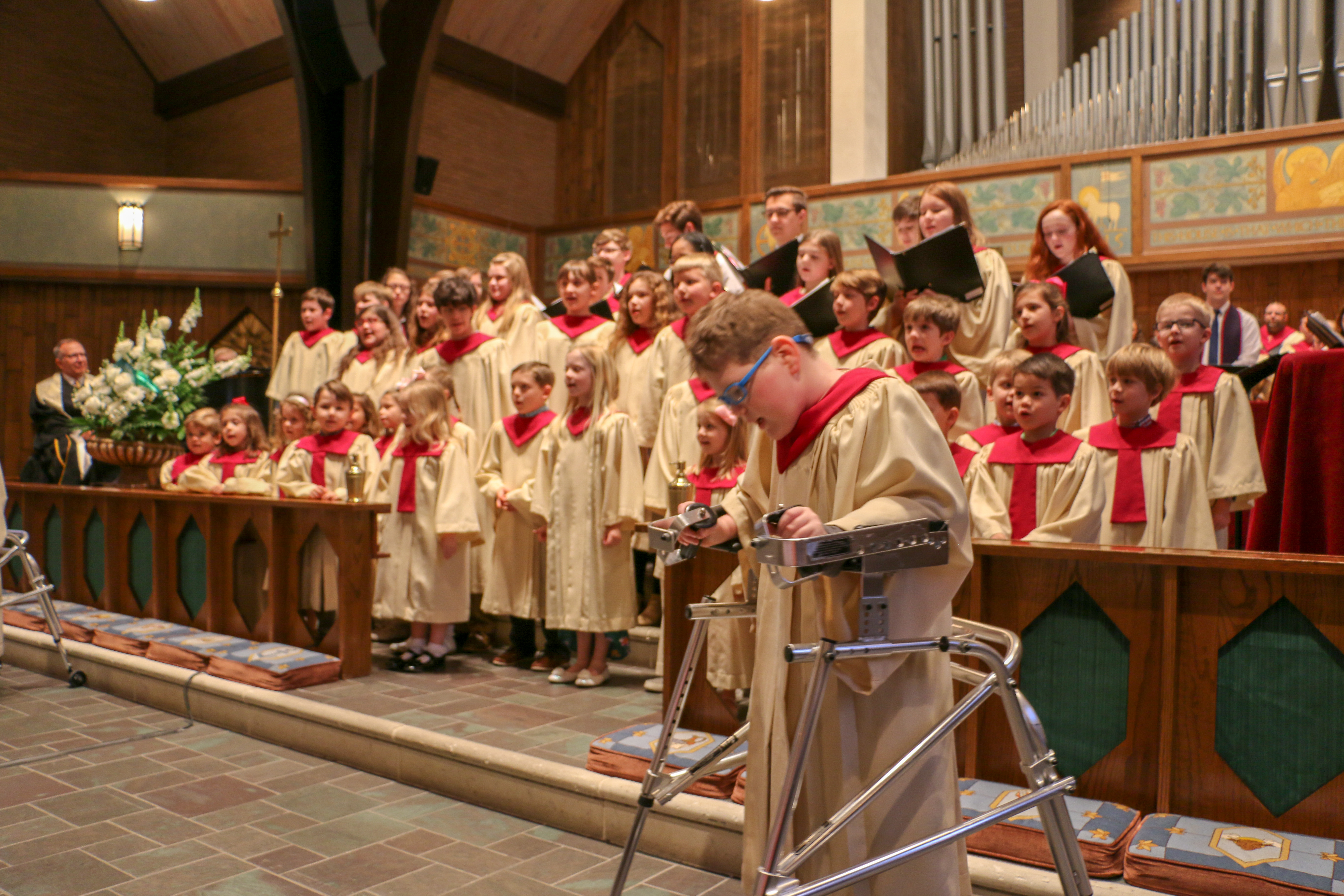 A choir, composed of children and adults, sings during the worship service at St. James on April 7, 2019. || Photo provided by St. James UMC

A timeline of decade highlights from the first 50 years of St. James history has been installed outside the Worship Center. This two-year long project was designed by member Lesley Cooper with the help of the archives committee. Members of the archives committee are Frances Jernigan, Nan Tucker, Evelyn Kiernan, Sandra Karcher, Ferris Garrison, Lou Lane and Mary Epperson. The archives committee gathered and organized the historical data and photos into decades; a lengthy process. The history of St. James is full of big and small moments. The task of distilling those many moments into key highlighted moments and developing the story of St. James fell to Lesley Cooper, who finalized the design and oversaw production of the timeline with Lisa Havniear of LA Designs. “I couldn’t have done any of it without the extraordinary efforts of the archives committee. I can’t thank them enough,” Cooper said. We hope you’ll enjoy this new exhibit brought to you by the 50th Anniversary Committee, and look forward to the next 50 years of St. James history.

Another project of the Anniversary was to renovate Cottey Parlor. This space had not been updated since it was first built in the early 80’s. A 50th Anniversary St. James Cookbook was created to raise money for the renovation. It is filled with special recipes from current members and past members. Proceeds from the sale of the cookbook went to help with the refurbishing of Cottey Parlor.

Through the support of the Board of Trustees, private donations, and proceeds from cookbook sales the parlor has been updated and renovated. It now serves a dual purpose of a parlor and a chapel.