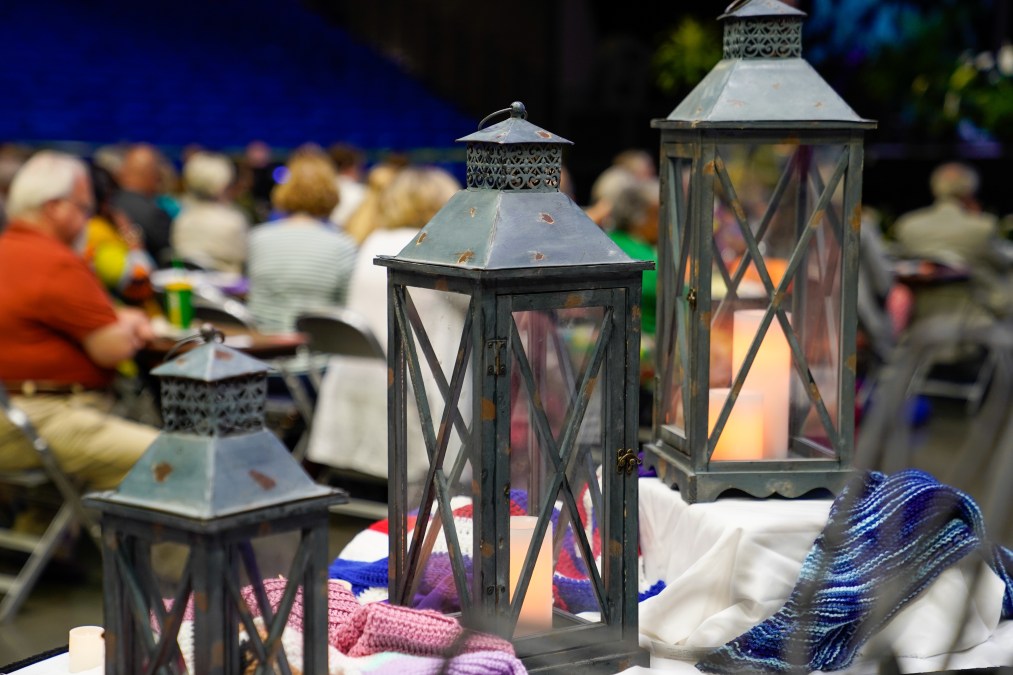 Arkansas Conference Lay Leader Karon Mann opted to deliver a slightly different version of her Laity Address than in year’s past.

Along with Associate Lay Leader Kathy Conley, lay leaders from each district of the Arkansas Conference joined Karon onstage to talk about the different ministry work that each district is undertaking.

Speaking for the Southeast District, Boyd — Director of the Arkansas Conference Lay Servant Ministries — mentioned how even smaller churches can work to serve their community in big ways.

“My church, Mount Olivet, is a smaller church, but with our food pantry, we serve more than 60 families from all across Cleburne County,” said Boyd. “And when you have someone that comes into your pantry and says, ‘if it wasn’t for y’all, I think I would have died’ that brings it all home, folks. If we can save one person, it’s worth it all.”

Byron Mann, gave the VIM and Disaster Response report today, giving the assembled body an update on the flooding situation along the Arkansas River.

Mann gave an update on what kinds of donations are needed from people and encouraged everyone to donate money and not flood buckets or health kits.

“The reason we aren’t asking for buckets and health kits right now is because we just received a delivery of 38 pallets of buckets. What we really need right now is churches to volunteer to help out their local community and to donate money, preferably cash, to the Arkansas Disaster Relief fund.”

The keynote speaker for Annual Conference this year is the Rev. Dr. Greg L. Jones, Dean of the Duke Divinity School at Duke University. 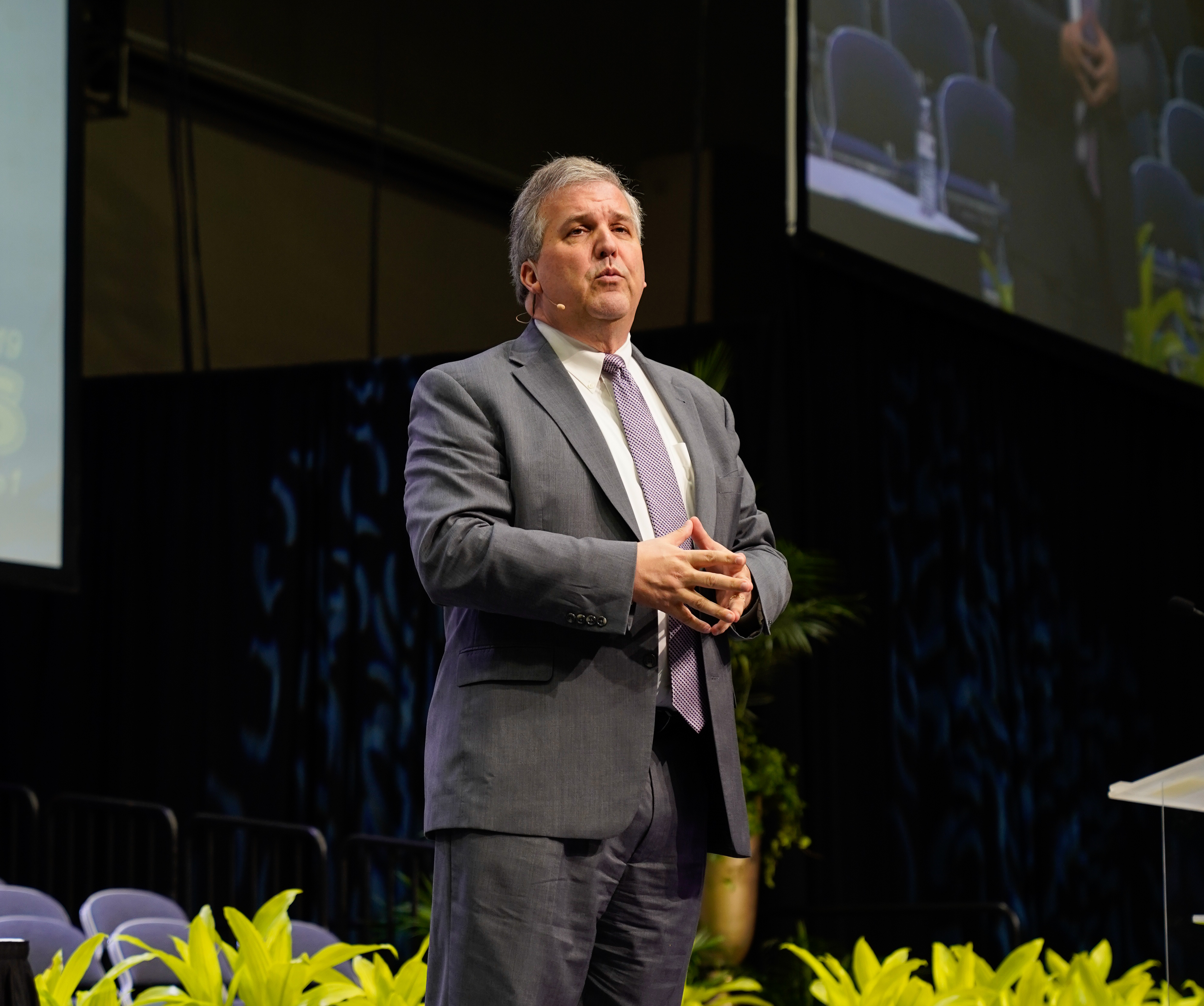 Jones focused his speech on reminding the United Methodists in the room about the rich tradition of mission work — reaching every person for Jesus — in our denomination, despite all of the many problems the United Methodist Church is currently facing after the 2019 special session of General Conference.

Jones used Numbers to illustrate how many of the Israelites were content to continue wandering in the wilderness or return to Egypt — to slavery and oppression — rather than face their fears and enter God’s promised land.

Jones brought the mission of United Methodists back into full focus during the remainder of his sermon, reminding those in attendance why we believe what we believe as Christians, and the power to in all of us to do good work through that belief.

During the second day of delegate elections, the voting members made it through a few more rounds before filling the remaining laity and clergy spots for General Conference 2020. 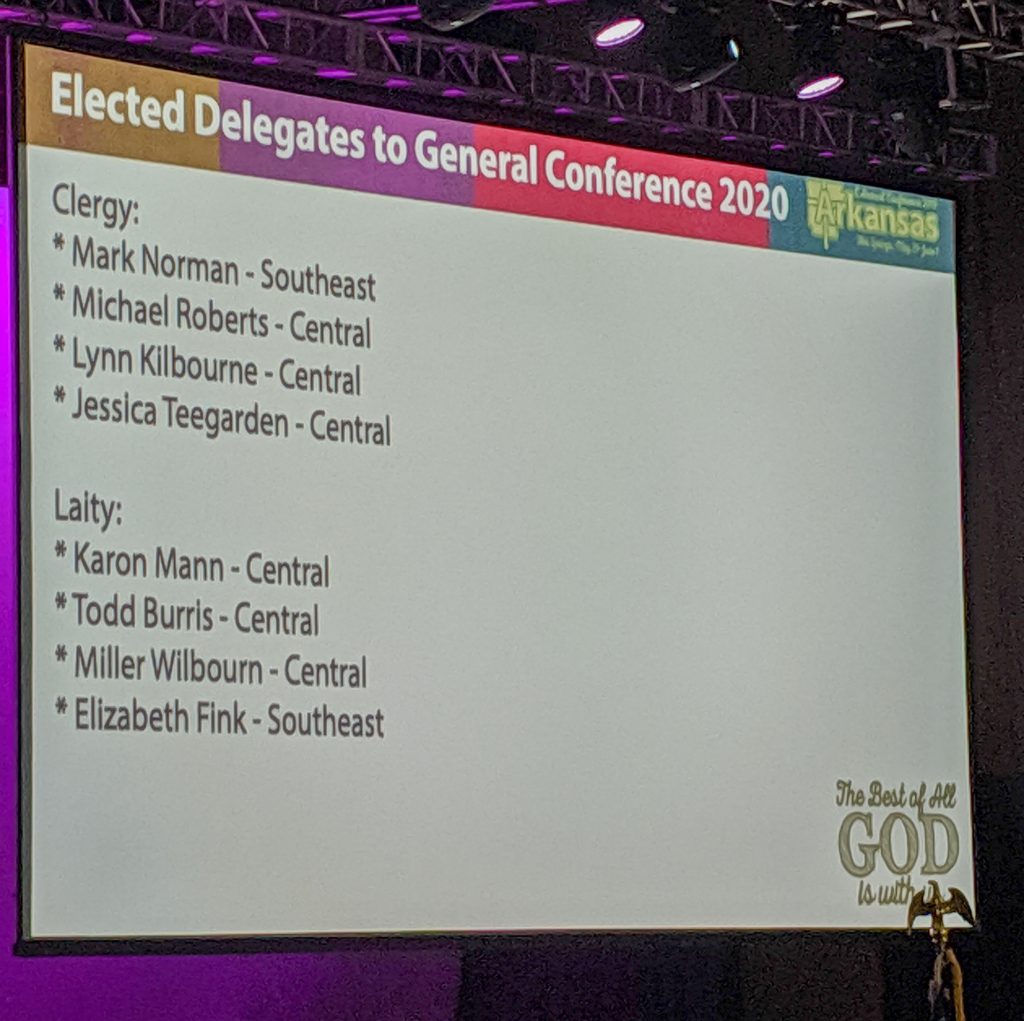 The fifth clergy ballot produced two delegates who made it over the minimum threshold for election: the Rev. Elizabeth Lynn Kilbourne (53.63%), senior pastor of North Little Rock First UMC, and the Rev. Jessica (Jessie) Waddell Teegarden (52.60%), an ordained deacon in the United Methodist Church.

Teegarden is the first deacon elected by the Arkansas Conference to the General Conference delegation.

“I am overwhelmed with emotion with the opportunity to represent Arkansas at GC 2020 and grateful for the support of my colleagues in ministry. It is especially meaningful to represent young clergy women and the order of deacons,” Teegarden said.

“I am grateful for those who have paved the way and supported the need for deacons’ voices to be present at the table, especially Rev. Laverne Keahey and Rev. Lu Harding who have served on jurisdictional delegation and as alternates in the past. I pray that we will continue to ‘make history’ and continue to elect new, young, and diverse voices to the delegation.”

For the laity, it took one more round of voting than the clergy ballot, but the final two General Conference delegates were selected in round six.

Miller Wilbourn (54.17%) and Elizabeth Fink (50.25%) were elected as lay delegates to General Conference, bringing the total delegates from Arkansas to four clergy and four laity.

“I feel honored to serve as a delegate, and praise God for the opportunity,” Fink said. “I am thankful and don’t take for granted the trust that the Arkansas church has given me to continue contending for the faith.”

The final delegation from Arkansas is as follows:

Three out of eight Arkansas delegates are under the age of 35, a noted increase from General Conference 2016 and 2019, where there were no delegates under 35 and only one alternate under that age.

According to the Young People’s Statement made at General Conference 2019, only 7% of elected delegates were under 35 years old.

While some, such as the Arkansas Conference Center for Vitality, used their time to highlight new programs, learning tools and their wonderful staff, others, like the newly formed Native American Committee, used their time to focus on the issues that still need to be addressed.

The Native American Committee, which formed at the 2018 Annual Conference and is lead by Angie Gage, highlighted that indigenous people are found in almost every county in Arkansas.

Gage also stressed the need for more churches to get involved with the Native American Committee at their own congregation and the reasons why it’s important to pay attention to the struggles of Native people.

“More than 6,500 indigenous women and children in the U.S. go missing or are murdered every year. We are working to raise awareness on this issue but we need your help,” Gage said.

Later, Annie Meek came to a microphone to bring awareness to the body that those with invisible disabilities should also be recognized by the Committee and more awareness should be brought to the struggles of them as well.

During the retirement service, 26 retirees were honored. From local pastors to district superintendents and elders, their combined time in ministry added up to 660 years of faithful service. 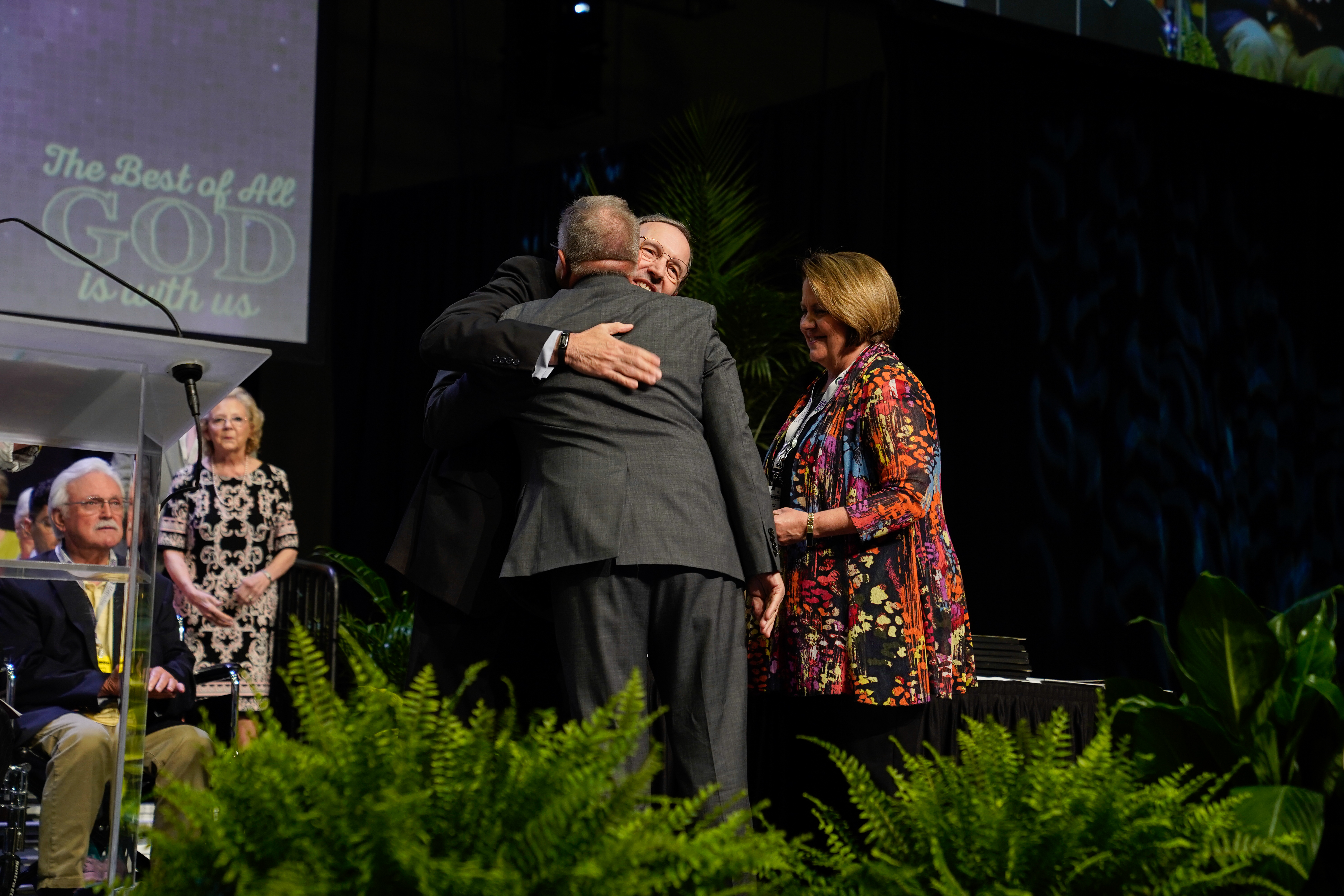 The Rev. Rodney Steele and Bishop Gary Mueller share an embrace during the retirement service on Thursday, May 30.
| Photo by Stephen Gideon

The names of the 2019 Arkansas Annual Conference retirees, as well as the years they served in ministry, are listed below. 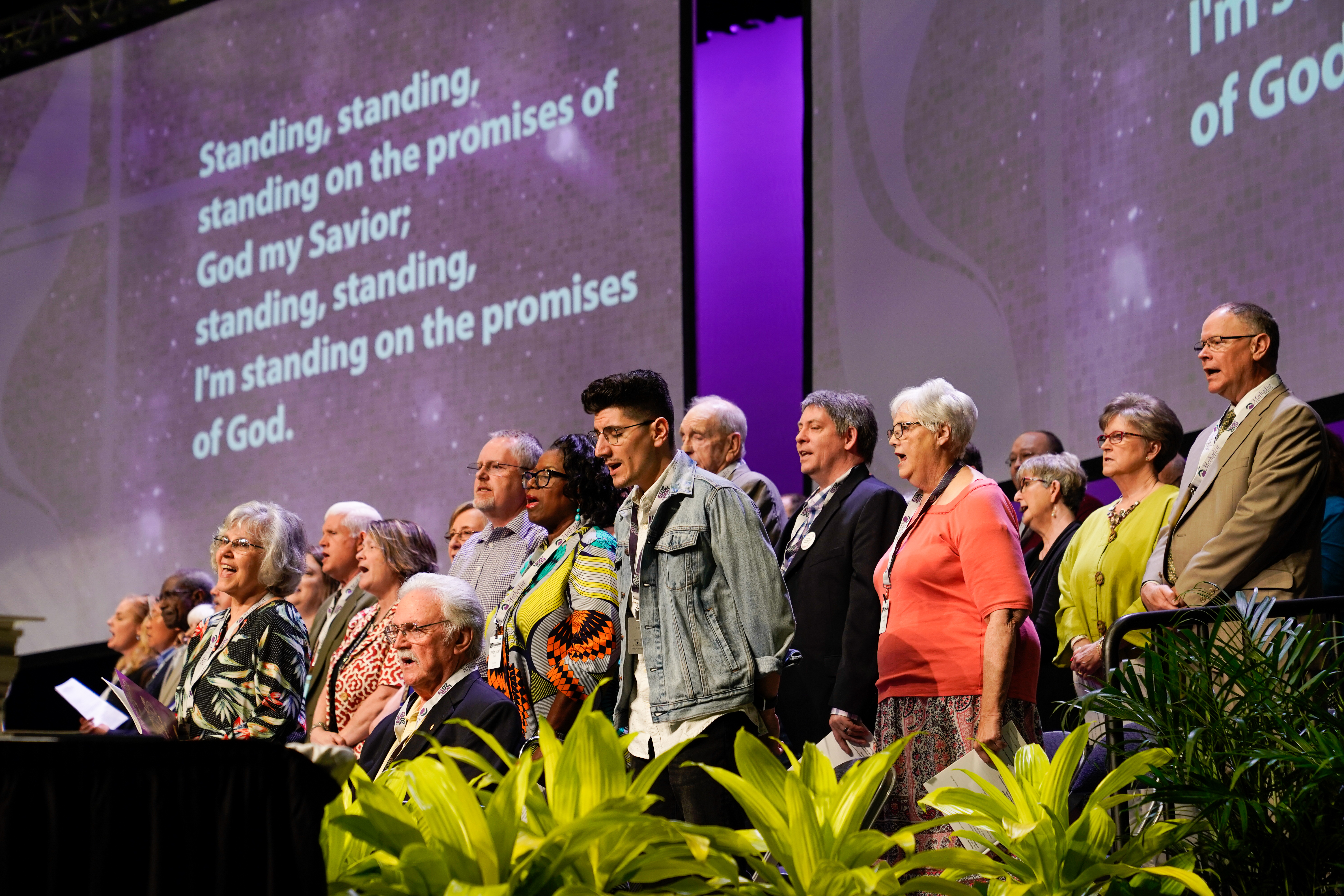 Those who have completed Local Pastor Licensing School were also honored and presented with certificates.

The Rev. Rodney Steele, who had just been honored in the previous Retirement Service, delivered the sermon for the Celebration of Life Service. The title of Steele’s sermon was “In God’s Heart Is Our Peace,” and he focused his message on the precious gift of life, and how we can all find solace for the ones who have left us by remembering that God’s love is sufficient.

The saints who have died this past year are listed below.

Annual Conference will continue at 8 a.m. Friday, May 31 with morning worship and a business session.