Amazing Grace
Grace UMC sets discipleship goals for 2019 and beyond 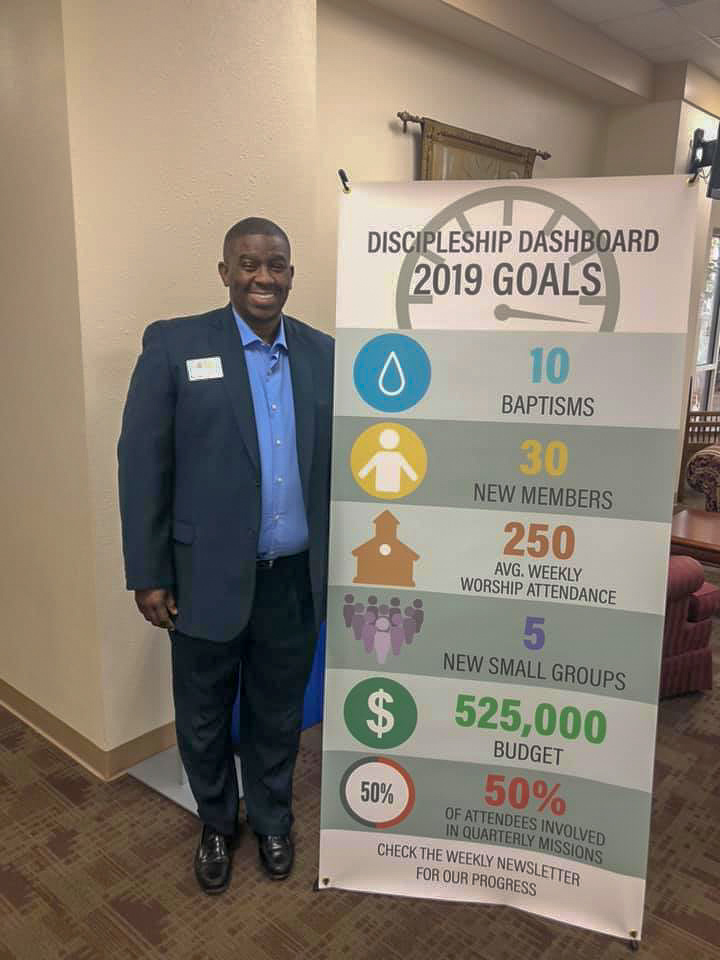 The Rev. Herschel Richardson stands with the Grace UMC discipleship goals on the first Sunday of 2019. These goals were set by a 12-person committee made up of church members who are invested in the growth of the church.

With every church congregation, there is a universally understood goal of reaching people for Christ while at the same time growing your membership numbers.

In the United Methodist Church, and specifically in the Arkansas Conference, that goal is understood as “making disciples of Jesus Christ, who make disciples equipped to transform lives, communities and the world.”

Grace United Methodist Church in Conway, Arkansas has taken that trajectory a step further and laid out their plans for 2019 and beyond into something they call their “Discipleship Dashboard 2019 Goals.”

The Rev. Herschel Richardson was appointed as the senior pastor at Grace UMC on July 1, 2018. A few months into his new role, he – along with a special leadership group at Grace – came up with a blueprint for growing their numbers in every aspect of the church in 2019.

“I wasn’t looking at the church and saying there was anything wrong with the way we were doing things. It was more about understanding that as we move forward we had to take a very intentional approach about where we were going as a church,” Richardson said. “I didn’t really feel we could move forward this year as a church in the fullest capacity without first determining where we were trying to go.”

Richardson formed a 12-person committee called the Intentional Discipleship Pastors Advisory Committee at Grace with the purpose of reviewing the goals for the church and working on ways to move toward meeting their goals.

The committee is made up of congregants from both the 8:30 and 11 a.m. services, and both new and older attendees, in order to bring in a diverse group of ideas and perspectives, Richardson said.

Through prayer and discussion, the committee identified six areas of improvement for 2019: baptisms, new members, average weekly attendance, new small groups, their 2019 budget, and the number of church attendees involved in quarterly missions.

For each of these areas, a specific goal was set; 10 baptisms, 30 new members, 250 average weekly attendance, five new small groups, a budget of $525,000, and at least 50 percent of attendees involved in quarterly missions. 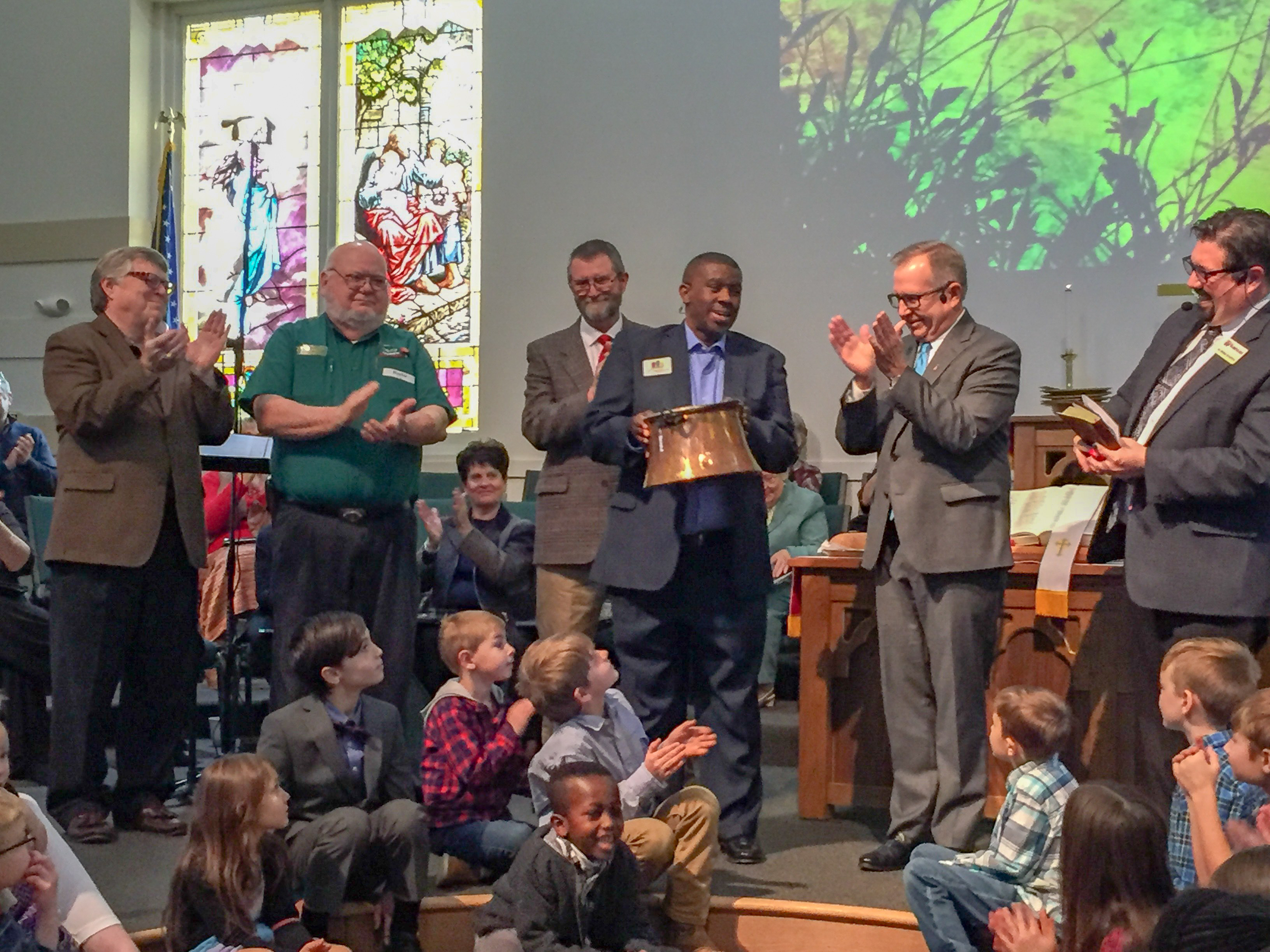 Grace UMC in Conway had a mortgage burning ceremony in January 2019, the same month that the church launched their new discipleship goals initiative. Pictured in the center, from left to right, are the Rev. Herschel Richardson, Bishop Gary Mueller, and Central District Superintendent Blake Bradford.

Every week, Grace sends out an emailed newsletter that highlights the progress for each goal. Richardson said this keeps congregants up-to-date on the church’s progress toward their goals, as well as motivates them to see how they can work to improve their numbers each week.

According to the latest numbers from the Feb. 17 newsletter, Grace has had six new members since Jan. 1, as well as an average attendance of 222 people across the two morning services and online worship.

They have also been able to start two new small groups in 2019; one in January and one in February. Since Richardson arrived at Grace in July 2018, the church has started five new small groups.

The small groups don’t have a singular focus or topic, but they do typically organize themselves based on age and life experiences.

A couple of the groups meet off campus from the church, including a group of 20-something young professionals that call themselves the “Roaring Twenties,” Richardson said.

“Small groups add another dimension to our relationship with God by providing a community of people seeking to do His will in our lives.”

Jennifer Stanley, a member of Grace and a second through fourth grade Sunday school teacher, is one of the new leaders of a small group at the church. She leads a group of 30 – 40-year-olds with children called “Open Door.”

“We chose the name ‘Open Door’ because that is what we want to project. But we welcome anyone of any age and any circumstance!”

Stanley said this is her first time leading a group of adults, but she believes in the power of small groups to connect people from different walks of life.

“Small groups allow for intentional conversation and provide opportunities for real spiritual growth. I find our group shows up ready to engage in meaningful discussion,” she said. “We are able to share in each other’s struggles and triumphs. Small groups add another dimension to our relationship with God by providing a community of people seeking to do His will in our lives.”

Another of Grace’s small group leaders, Sandra Kennemore, teaches a class of older adults. She said her group started a while ago and were known as the “Hilltoppers.” Her group typically consists of people who are “over the hill” in age.

Kennemore said that at some point, the original Hilltoppers group faded away, but when Richardson was appointed at Grace, he expressed to Kennemore the desire to bring the group back.

For Kennemore, it’s been a blessing to see the return of a group that had once helped connect many of the older members of Grace.

“Small groups give people a chance to get together who don’t normally get together and talk and relax and share whatever is on their heart,” Kennemore said. “It’s just a joy to see.” 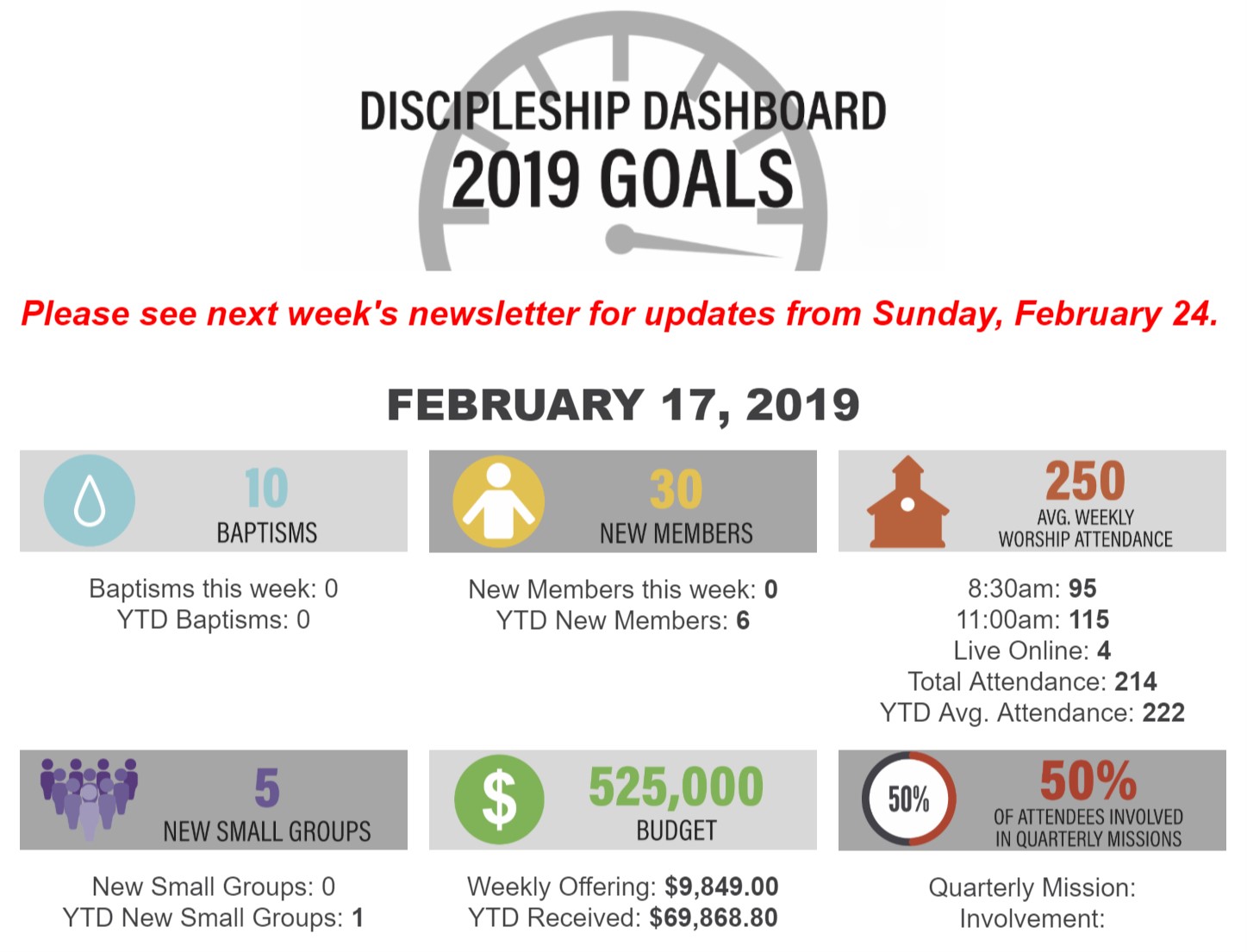 Toni Wyre, who leads a group of 30 – 40-year-olds called the “Cross Walkers,” also sees the value of a small group’s ability to connect people who can relate to similar situations and life journeys.

“The more we understand the lessons of the Bible and how they might apply to us, the greater fellowship we can have with one another and the better disciples we become,” she said.

Wyre also sees how the 2019 goals have connected members of Grace in a more intentional way.

“As we look toward achieving our discipleship goals, sharing our experiences and perspectives with guests and potential members will build an even stronger sense of community and engagement at Grace.”

When it comes to reaching the goals that Grace UMC has set for 2019, Richardson thinks that all of the individual goals rely on each other to succeed.

“We think all of them go hand-in-hand. So, as we bring in new members, that will also lead to more baptisms and more money for the church as well.”

And it’s not just about setting a goal and then waiting to see what happens; the discipleship committee has also come up with a strategy for reaching people in multiple ways.

“One of the things we focused on in the month of January was membership. And we talked about how we encounter people that come to our church, from the time they get out of their car until the time that they leave service.”

The committee focused on making it a priority to initiate contact with new or reoccurring visitors and finding a way to connect with them.

One example that Richardson brought up was not only greeting a visitor to Grace when they walk in the door of the church, but also reaching out to the same person – through email, text message or other means – to invite them to come to a small group one night.

Richardson said the committee is not exclusive, and anyone in the church that’s interested in joining the community can do so. They are simply looking for people who are dedicated to growing Grace.

As for the future of Grace, Richardson said that even if they meet all of their goals in 2019, that doesn’t mean that’s the end of their work.