Traditional Plan passes through legislative committee, One Church Plan fails to move on 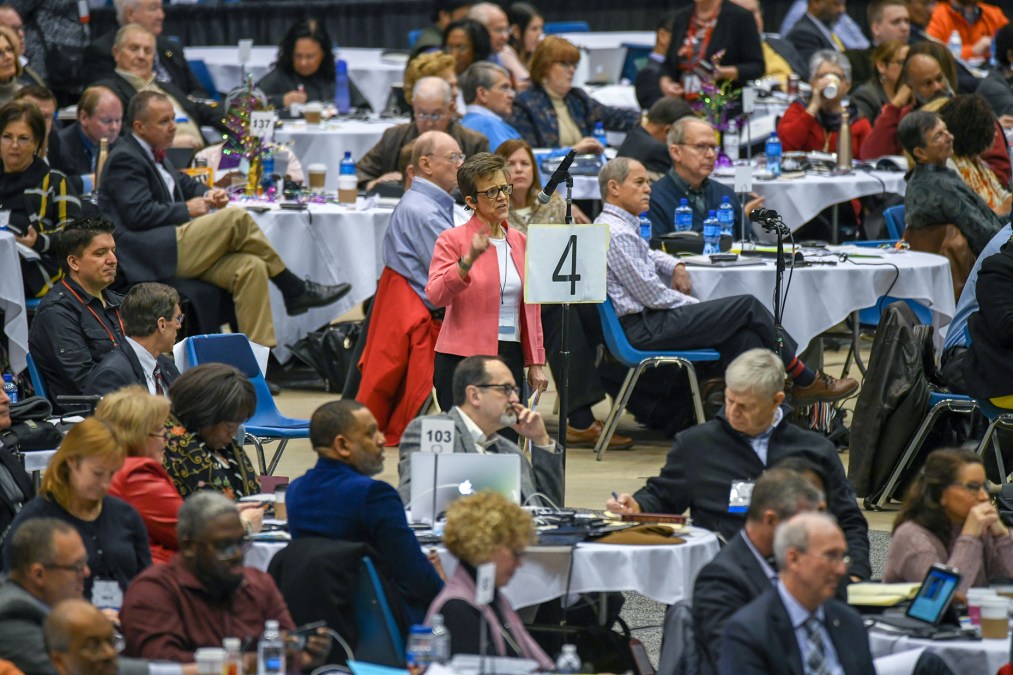 After a morning session full of discussions, amendments and debates, the legislative committee of the General Conference voted to send the Traditional Plan to tomorrow’s plenary session by a vote of 461 (56.22 percent) to 359 (43.78 percent).

The One Church Plan, the plan that garnered a majority of support from the Council of Bishops, failed to get enough votes to pass on to the plenary session. The One Church Plan received 386 Yes votes and 436 No votes.

The Traditional Plan seeks to strengthen the current language in the United Methodist Church’s Book of Discipline regarding the ordination of LGBTQ clergy and the officiating of same-sex marriages.

In contrast, the Once Church Plan looked to remove the language regarding human sexuality from the Book of Discipline.

But the Traditional Plan did not pass through the legislative committee without some discussion and amendments to its original wording.

Two of the 15 petitions found in the Traditional Plan were amended before the plan was sent to the plenary session. Both amendments involved Episcopal accountability.

The Rev. Dr. Rebekah Miles used her time at the microphone during the Traditional Plan discussion to voice her thoughts on why the plan was the wrong choice for United Methodists.

“There is a wonderful saying in Zambia when a baby pees in your lap, you don’t cut off your legs,” she said, arguing that the Traditional Plan seeks to cut off church leaders’ legs.

Both disaffiliation petitions focus on what will happen with church property and pensions if clergy and churches decide to leave the United Methodist Church.

Laura Merrill, a delegate from the Rio Texas Conference, said that the Disaffiliation – Boyette petition is “like setting the house on fire as you walk out the door.”

Bishop Gary Mueller offered his thoughts after the One Church Plan failed to pass.

“Some of you are glad, and some devastated by today’s events,” Mueller said. “Even more importantly, the fact of the matter is that the United Methodist Church is deeply wounded because of the significant theological and ethical divisions that exist in our church.

“So tonight I will be praying. For those hurting by the actions taken. For those who for reasons of faithful conscience support what has occurred. And for members of the LGBTQIA community who are struggling with the committee’s decision. Come, Holy Spirit, come.”

Statement from the Arkansas Delegates

The Arkansas Conference delegates made the decision to release a joint statement regarding today’s legislative news.

Their statement can be read below.

It’s been a wild 72 hours, a mix between riding a roller coaster and facing an oncoming locomotive. And we have made it through on the power of your prayers and by the grace of a loving God, plus cookies and coffee and candies provided by delegation members.

We are humbled by the outpouring of encouragement and prayers and by your presence with us here in Saint Louis and through social media.

And, remember, it’s not over till it’s over, so please keep praying and encouraging until we finish at day’s end on Tuesday and then pray us safely on home.

With love and gratitude,

In tomorrow’s plenary session, delegates will again work to perfect the four petitions that passed through legislative committee.

But the delegates are also waiting on a declaratory statement from the Judicial Council after a request was made for the Council to rule on the constitutionality of any petition that passed through the committee.

That statement is expected sometime tomorrow morning, during the first session.

There is also a chance that the One Church Plan and Simple Plan, which failed to pass the legislative committee, could be revived by minority reports.

Worship begins on the last day of General Conference at 8:20 a.m. and the plenary session will follow immediately after. 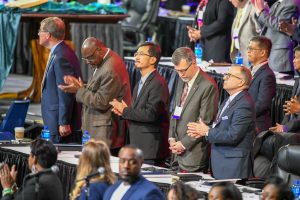 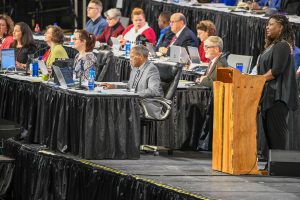 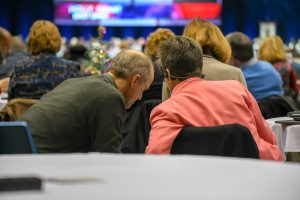 John and Rebekah Miles have a quiet conversation during the morning session. Photo by Stephen Coburn 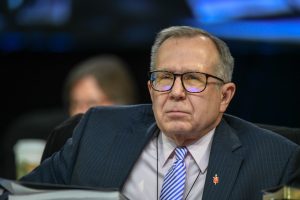 Bishop Gary Mueller listens in as a delegate speaks at the microphone. Photo by Stephen Coburn 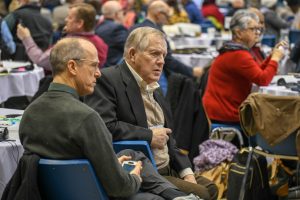 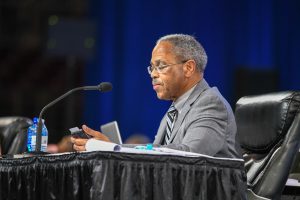 Joe Harris, director of communications for the Oklahoma Conference, presided as the Chair for the legislative committee. Photo by Stephen Coburn 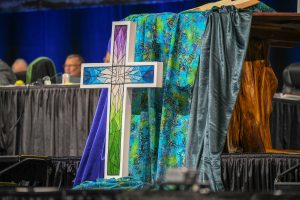 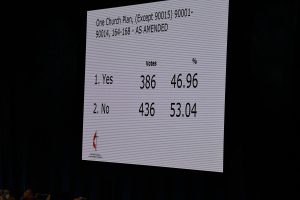 The One Church Plan failed to pass through the legislative committee. Photo by Stephen Coburn