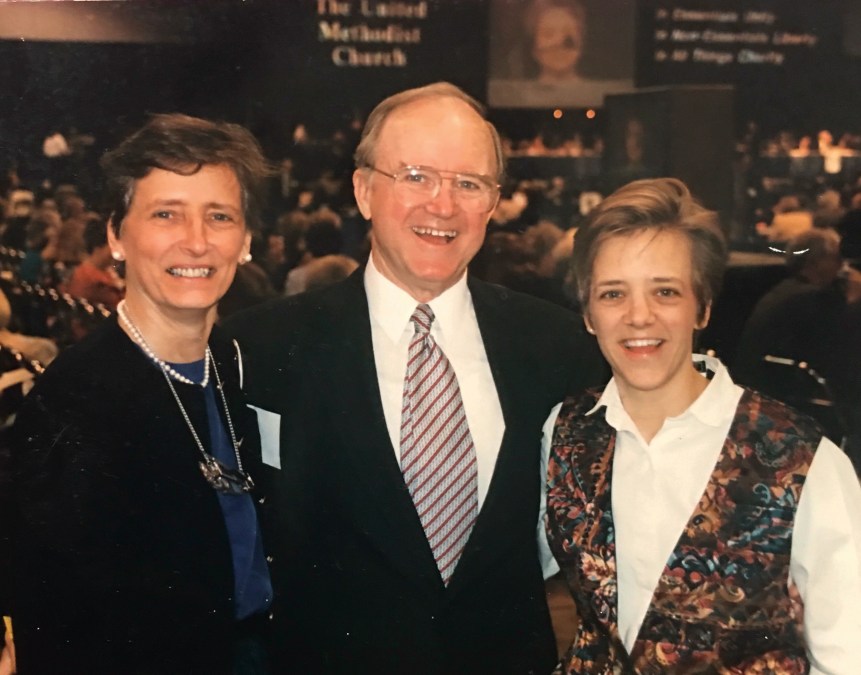 When I was a kid, the weeks before General Conferences were exciting. I remember our father, a clergy delegate, sitting up on my parent’s double bed with a stack of papers at his side, the telephone cradled under one ear and a pencil behind the other, counting votes and talking strategy for hours with other delegates around the country. After retirement, our late parents, JoAnn and John Miles, traveled together to General Conference as volunteers to lobby, especially for justice causes. I loved to watch as they worked for legislation they believed would advance the mission of the church. Church politics is the closest thing we ever had to a family sport, and they were good at it! As Bill Moyers put it, “Ideas are great arrows, but there has to be a bow. And politics is the bow of idealism.” How grateful I am to have had the gift of engaging in our political process and representing Arkansas Methodism at General Conference.

The upcoming General Conference will be exceptionally difficult. We are in a mess, and there is no clear way out. It will be hard to put together the votes necessary to pass any of the plans. And every option before us is flawed, including the option of doing nothing.

The Traditional Plan is hardly traditional. Its key provisions, designed to hold progressive annual conferences accountable to the Discipline, would undermine the central, long-standing authority of the annual conference (which dates from the historic 1808 Baltimore General Conference) and would have grave consequences, including a dramatic increase in church trials; hurdles that would make it harder for annual conference leaders to resolve complaints informally, even complaints having nothing to do with homosexuality; mandatory and severe minimum penalties of one year suspension without pay for a first offense; and new provisions for appealing the decisions of church trials beyond the annual conference on certain rulings of law and fact, not just process, which is a radical change. Again, this provision would apply to church trials generally, not just those relating to homosexuality. The authors of the plan didn’t set out to make radical changes; these are the unintended but entirely predictable consequences.

The One Church Plan could be more aptly named “the plan that a majority of the bishops think most likely to keep most of the church in effective mission together,” but that wouldn’t fit on a powerpoint slide and didn’t have much of a ring to it. I agree with the bishops and support this plan; it gives annual conferences and churches authority to make decisions that work for their ministry settings. But it is far from perfect, and I am under no illusion that it will leave our church fully united. Whatever happens at General Conference, some churches will leave, and we must have fair provisions for their departure.

The Connectional Conference Plan has the benefit of being so complex that hardly anyone understands it! (Our Arkansas Bishop is the rare exception, I am proud to say.) Its biggest disadvantage is that it requires not only a 2/3 vote of General Conference but also a 2/3 aggregate vote of all persons voting in annual conference sessions. That’s a high bar for a complex set of legislative changes that few people fully understand.

As much as we miss our dear parents, my brother, sister, and I regularly say to each other “Aren’t we glad that Mom and Dad are not alive to witness this General Conference. It would break their hearts!” But the more I think about it, I see how wrong that is. This General Conference and whatever emerges from it would never break their hearts; they weren’t so fragile as that, and neither are we. If our parents were alive, I know what they would be doing; they would be going about the ministry and mission of our church. They would be making a case for whatever position they judged best, praying hard, and then working to mend relationships and move forward again toward our shared mission which, frankly, is the only reason the politics ever mattered to begin with.

Like my parents, our lives and faith are not so fragile that we will find them undone by the action of any General Conference. Our hearts will remain strong and unbroken. Whatever comes, we will continue to pray and work together for our shared mission in the world.