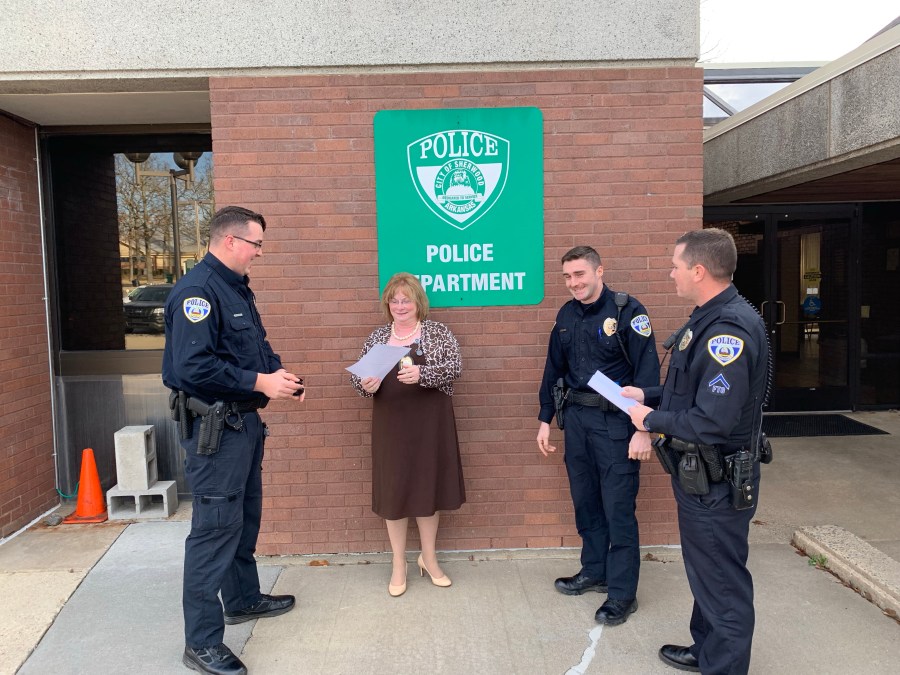 “There is an idea among people,” according to LaNita Daniels, “that one person cannot make a difference.

“We need to remember that God has called each one of us to do something special in our lives and we can make a huge difference in someone else’s life.”

Daniels, who also serves as the pastor at North Pulaski United Methodist Church, is the first female chaplain for the Sherwood Police Department. She has served as the chaplain for nearly five months now.

“I think it gives a new dimension to the chaplaincy,” Daniels said. “I’m coming from a different perspective.”

Daniels said, by being the first woman chaplain, she feels like she is representing the changing paradigm in which chaplains are viewed.

“When we are called out on the scene,” Daniels said. “hopefully, we can give the care that is needed.”

Tim McMinn, the pastor at Sylvan Hills Community Church in Sherwood for the past 26 years, started the chaplain program in 1996 and for many years he was by himself.

Eventually, he partnered with Hugh Yarbrough, the pastor at Christian Assembly of God in Sherwood. Yarbrough is also the chaplain at Arkansas Children’s Hospital in Little Rock.

“We noticed an influx of female officers and African-American officers, and we decided we needed to add diversity in our chaplain program,” McMinn said.

“So, we added Marion Butler, an African-American, but we still needed a female.” 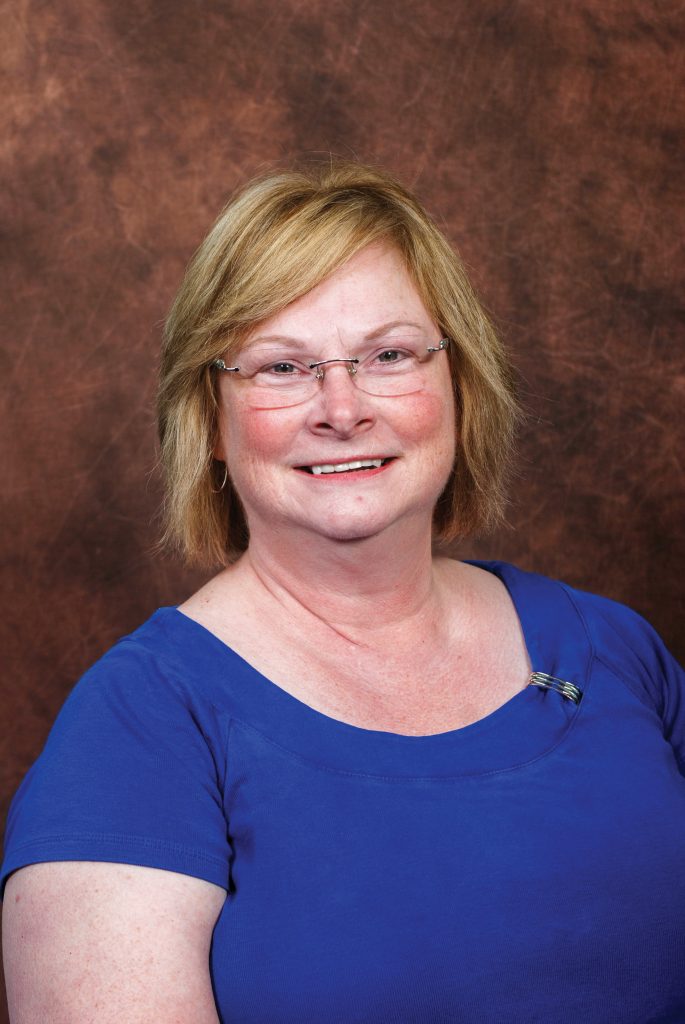 “LaNita and I had a discussion a couple of months back, and she is a pastor in this community and lives in the community and has done excellent things. She was an excellent choice to be a chaplain for our department.”

McMinn said Daniels has a great personality.” He said bringing Daniels aboard was an easy decision because it brings a sense of comfort to the female officers.

“I’ve learned through the years, female officers don’t mind talking to you in a problem situation, but other times in their lives with more personal issues, they prefer a female than a male,” McMinn said. “So, we had a desire to get a female on board, someone they can relate to.”

He said, when searching for a chaplain, he always looks for people that are very outward and have a great personality.
“LaNita has never met a stranger and she has a compassionate heart,” McMinn said. “When we are called into a crime scene, we are meeting people who are having one of the worst days of their lives.

“We have to have someone who understands the complexity of the situation.”

“It allows the officers to do their job and concentrate on the crime scene itself.” Daniels said. “It makes a difference for the officers because they don’t have to split their attention.

“I also ride with the officers, so I can get to know them, and they can get to know me. I’m not there to get in the way of their duties, but for them to know I’m there if they need me,” Daniels said. “If they would like to bounce something off me or anything like that.”

“The more of a relationship I can have with the officers, the more comfortable they are when they call me to a scene.”

Daniels said she tries to be at roll call as much as she can for all three shifts and do a devotional before the officers leave for duty. She also spends time with the dispatchers and eventually plans to spend time with every department.

Lieutenant Jamie Michaels and Daniels ride together, and Michaels said while it was difficult at times to talk due to the high amount of calls at night, she said they still spend a good amount of time chatting and “got to know each other on a personal level, which was great.”

“I’m a female who works in a male-dominated field anyway,” Michaels said. “I have had to find ways to relate to people regardless of their background, their orientation, male or female – whatever.

“But one thing I can appreciate with her, it does make it easier to relate to her on a great number of things, not just faith-based, but just life in general.”

McMinn, who also serves as an alderman for the city of Sherwood, said the department has been very receptive of Daniels.

“She’s just been accepted and received by both male and female officers,” McMinn said. “Everyone seems to like her.”

“Usually, chaplains are just called out to the scene when needed,” Bedwell said. “(LaNita) is trying to change that. She is interacting with our officers, letting them know her and getting to know them.

“…From the few officers that I have talked to, it has been nice and a good thing, having LaNita on board.”

Bedwell estimates of the 81 officers on staff, there are six or seven officers who are female. Michaels, who has been an officer for 15 years, said Daniels makes herself available to everyone.

“I think (LaNita) is a very loving, genuine person,” Michaels said. “She wants to get to know everybody on a personal level and takes a genuine interest in our officers in the police department. 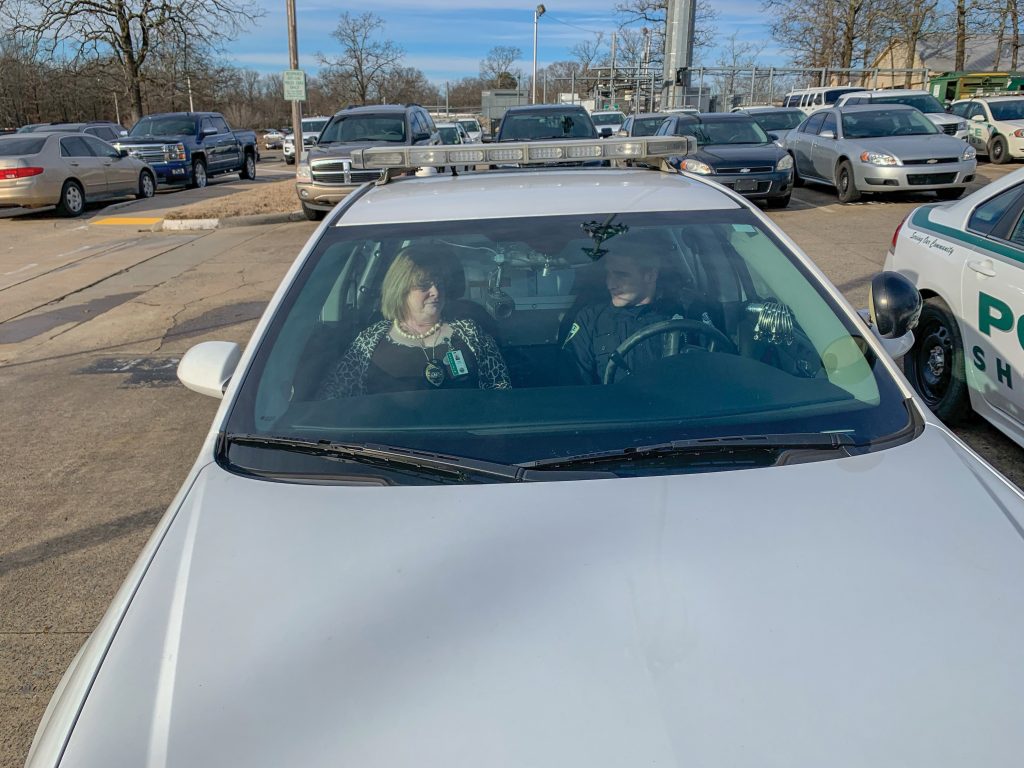 Rev. LaNita Daniels and SPD Officer Cherry ride together in a police department patrol car. Daniels often goes along with the officers when she is needed at a crime scene.

Daniels, who is originally from Antioch, which is just outside Beebe, said she has wanted to become a chaplain for years.

“I feel like I am making a positive difference in people’s lives,” Daniels said.

“The ripples we make, can be good. But if we don’t act intentionally and don’t do what God calls us to do, we have lost an opportunity and so do all the people who would be affected.”

“They go out and do more than give traffic tickets. They are there to face pure evil, and they are the ones that show up to fight it. They need a Godly presence.

“…The fear and concern of their families is a huge weight on their shoulders.”

Michaels said just as those in faith-based work, she sees this as a calling.

“I don’t think I could stay in this as long as I have, especially with the way things are now, without knowing I was doing this for a greater purpose,” Michaels said. “This is a thankless job.”

She said having Daniels at the department brings a sense of comfort.

“It is very comforting to listen to her message and the quick prayer she does; I take it to heart,” Michaels said. “After we say, ‘Amen,’ I’m ready to go to work and get after it.

“I hope that my officers take the same comfort that I do.”