Day one of General Conference a day of prayer, not debate 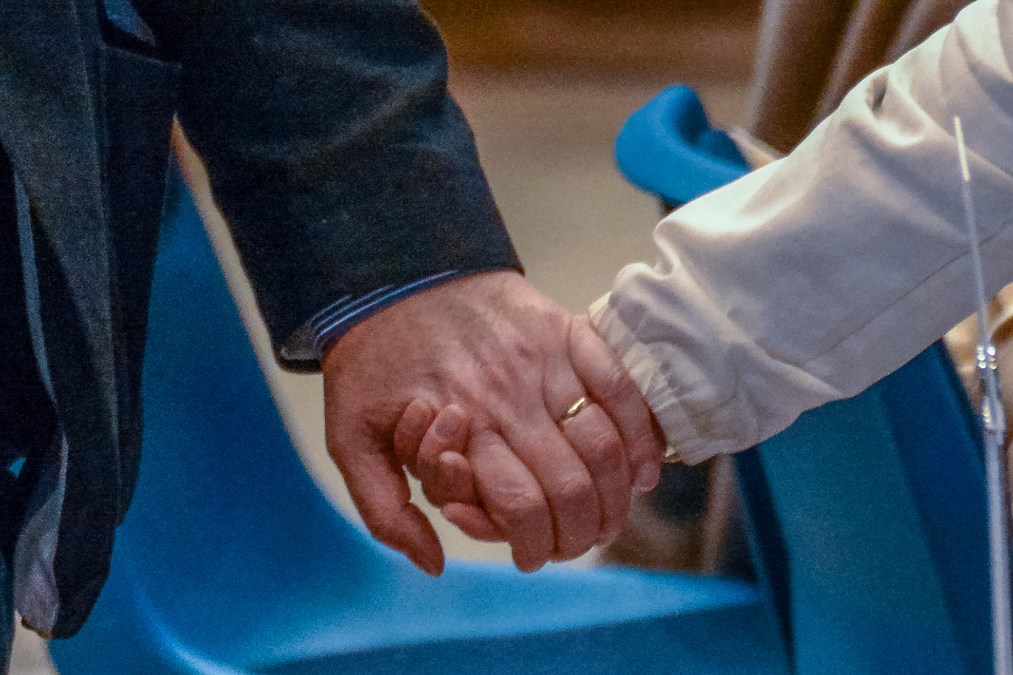 The first day of the 2019 called special session of General Conference was not a day of debate and petitioning, but rather prayer, discernment and a good deal of empathy.

The 864 delegates to General Conference gathered together in the America’s Center – also known as The Dome – in St. Louis, Missouri for the first official day of the special event.

The morning’s events began with an opening worship and plenary prayer service at 9 a.m., featuring the theme “Surrender to God’s Purpose.”

Bishop Gary Mueller gave an opening prayer and welcome to delegates and visitors at The Dome.

“We trust that the Holy Spirit will move us to do what needs to be done here,” said Mueller, in his prayer.

The morning prayer service was followed by a time of experiential prayer, featuring bishops from four regions of the world: Europe and Eurasia, Africa, the United States of America, and the Philippines and Southeast Asia.

Each group of bishops gave a report that celebrated the places where the work of God is thriving in their conferences and episcopal areas, as well as the missional challenges in each area.

The African bishops, Bishop Mande Muyumbo of the North Katanga Episcopal Area and Bishop John Yambasu of the Sierra Leone Episcopal Area, asked for delegates and United Methodists around the globe to pray for the health, education, leadership development, women’s empowerment, and agriculture on the African continent.

Bishop Carcaño mentioned some of the struggles the U.S. faces daily, including the current crisis on the border involving migrants.

“Migrants are rejected, treated as pariahs (in the U.S.) Viewed as the encroaching enemy, and often discriminated against. But we remember that Holy Scripture calls us to love the migrant,” Carcaño said.

After lunch, Bishop Mueller addressed the delegates once again during the closing plenary prayer service and spoke of his father, who had died more than four years ago.

“My father was always learning something new and on a new adventure. The last 12 years of his life he dealt with strokes, heart conditions and cancer. Yet he kept going. He was still courageous,” Mueller said. “Sometimes, when it comes to seeking God’s will, it’s really easy when there are no problems. But difficult times and deep pain takes every bit of courage we have.”

Bishop Mueller ended his message repeating the importance of courage in our walk with God.

Overall, the day of prayer brought good feelings for the days ahead, for both delegates and Bishop Mueller.

“The importance of the day of prayer is that it helps us experience again who we really are,” Mueller said after the day’s events had concluded.

“This was a very unusual day; we’ve never done this before,” said Asa Whitaker, lay delegate for the Arkansas Annual Conference.

“It’s hard to imagine that we would spend the day praying, but we did. We experienced prayer and worship in many different languages. It was a very moving and powerful time.

Worship will begin at 7:30 a.m. tomorrow, with the morning session starting around 8:30 a.m.

To see more photos from day one of General Conference, visit our Facebook Page.