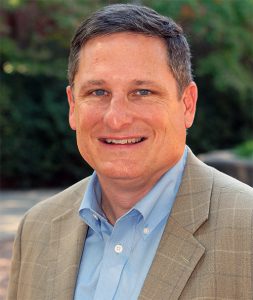 LITTLE ROCK, AR (Nov. 2, 2018)  — Rev. J. Wayne Clark, Associate Vice President for Development and Dean of the Chapel at Hendrix College in Conway, Arkansas has been named President and CEO of The United Methodist Foundation of Arkansas and will begin his new role in January 2019.

“I am excited for the opportunity to serve The United Methodist Foundation of Arkansas in this capacity,” said Clark, who has been a member of the Foundation’s Board of Directors since 2015. “Since beginning my ministry in Arkansas, I have had a strong admiration for the Foundation’s work. Being on the board has given me even more insight into the many positive ways that the Foundation is making an impact on Arkansas Methodism.”

Clark served as Hendrix College Chaplin for 18 years before joining the Office of Advancement in 2015 to lead the college’s Annual Fund, major gifts and planned giving efforts.  “I have learned that philanthropy is so much bigger than simply giving money. It’s about an individual’s purpose in life and legacy,” he said. “I feel very privileged to be part of this sacred relationship, and I look forward to serving the Foundation in this same way.”

Clark, a native of Malvern, AR and a 1984 Hendrix College graduate, received his master’s degree from the Perkins School of Theology at Southern Methodist University in Dallas, Texas, in 1989. Since 2012, he has served as Director of the Arkansas Conference Course of Study through SMU and the Perkins School of Theology. Before returning to Hendrix College in 1996, he served as chaplain for Children’s Medical Center’s Hematology, Oncology and Neurology Departments in Dallas; as minister of Halifax Methodist Circuit in Halifax, England; and associate minister of Lovers Lane United Methodist Church in Dallas. He has served Arkansas United Methodist Churches in Magnolia and Pine Bluff.

As the Associate Vice President of Development and Dean of the Chapel for Hendrix College, Clark successfully directed the planning that led to a $2 million grant from The Lilly Foundation to develop programs to assist students in the “theological exploration of vocation.” During the five-years, he successfully helped secure an additional $1.5 million to extend the original grant three years. Clark effectively worked to secure a $1 million gift to continue the work and programming of the Lilly Foundation to be named the Miller Center for Vocation Ethics and Calling. He was instrumental in writing and receiving a $500,000 five-year grant from The Lilly Foundation to establish a program for Clergy and Civic Engagement and in securing a $50,000 gift to endow the John and Marjem Gill Preaching Workshop.

Clark follows another Hendrix alumnus, the late James (Jim) B. Argue, Jr., who led the Foundation until his death in May. Argue joined the Foundation in 1981 and with his vision and direction, helped it become one of the largest United Methodist Foundations in the country. “Under Jim’s leadership, the Foundation grew not only financially but also in the scope of its ministries,” said Clark. “It’s an honor to continue his legacy on behalf of Arkansas and the Church.”

About Hendrix College
A private liberal arts college in Conway, Arkansas, Hendrix College consistently earns recognition as one of the country’s leading liberal arts institutions, and is featured in Colleges That Change Lives: 40 Schools That Will Change the Way You Think About College. Its academic quality and value have established Hendrix as s fixture in numerous college guides, lists, and rankings. Founded in 1876, Hendrix has been affiliated with the United Methodist Church since 1884. To learn more, visit www.hendrix.edu.