Arkansas UMC opposes domestic violence: How Methodists can take steps to prevent abuse in the church 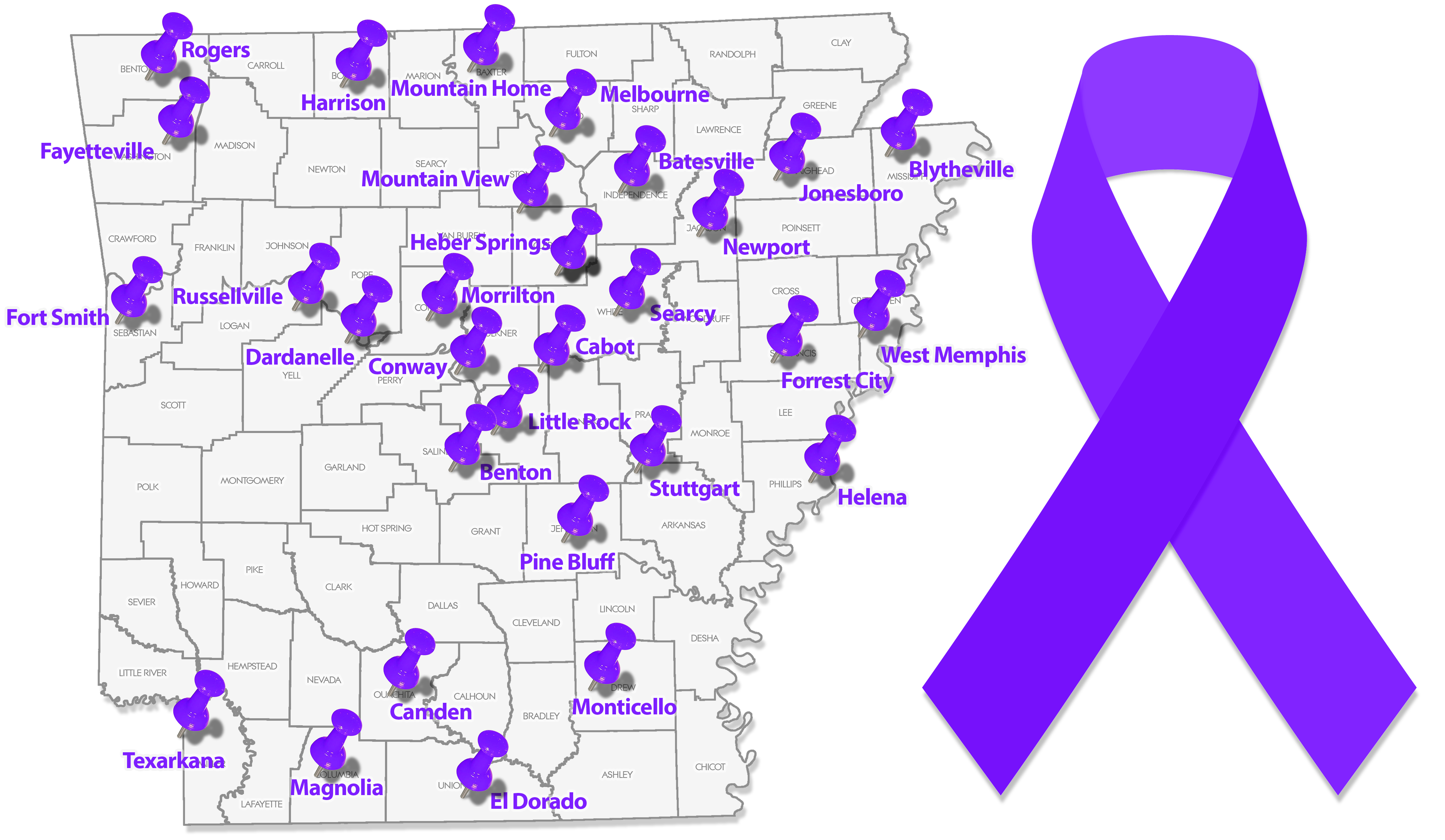 Pictured are the locations of all of the shelters from the Arkansas Coalition Against Domestic Violence around Arkansas.

Until I became a pastor, I had no clue that October — a month full of autumn temperatures, changing leaves, and a month typically focused on gearing up for stewardship and Advent in the life of the church — is also Domestic Violence Awareness month.

Beginning in the 1980s, October became nationally recognized as “Domestic Violence Awareness Month” with the tri-fold intention to mourn the lives lost to domestic violence, celebrate the survivors, and connect the people and resources that work to end domestic violence.

My earliest memory of observing domestic violence was on a Sunday morning from my place in the church sanctuary. As I sat in my pew, I was shaken to my core as I saw a male punch through the windshield of his female partner, all the while the congregation sang the opening hymn.

A few years later, at a national United Methodist Women gathering I continued to find many women who spent their entire lives serving in the church had experienced domestic abuse in some form — physical, mental, emotional, psychological, and financial — at some point in their lives and had never had any support from their church and/or pastor during such abuse.

Both of these experiences taught me that the church is not immune to domestic violence. Yet, I did not hear anything from the pulpit or the pew on domestic abuse until I sought to learn more about how the church can respond to this crisis.

The math is both simple and shocking, one in four women, at some point in their lives will experience domestic abuse. Domestic violence is not only physical, but it can also occur through any behavior in which the spouse, partner, girl/boyfriend or intimate family member seeks to gain power and control over another individual.

Most often thought of as violent, physical action, domestic abuse can include mental, emotional, psychological, financial, digital and sexual abuse. According to a 2010 Center for Disease Control survey, an estimated 420,000 women and 375,000 men in Arkansas have been victims of physical abuse, rape and/or stalking by an intimate partner at some point in their lives.

Domestic abuse can happen regardless of sex, gender, age, race, ethnicity, geography, economic and education status, religious affiliation, or creed. If we are honest with ourselves and with the sobering statistics, when we look around the congregation during worship, our churches can be powerful places of healing for those among us — and even us — from the domestic abuse. We hold the Christ-light for a broken, bruised and pain-filled world. We have the opportunity to proclaim that God is not a God of abuse, but rather a God who condemns abuse and offers unconditional love and abundant life.

The United Methodist Church, in our social principles, affirms that “family violence and abuse in all its forms verbal, psychological, physical, sexual is detrimental to the covenant of the human community. We encourage the Church to provide a safe environment, counsel, and support for the victim and to work with the abuser to understand the root causes and forms of abuse and to overcome such behaviors.” (UMC Social Principles 161.H). In an era when we continue to hear the stories of #metoo and #churchtoo, we must know and continually lift up that the United Methodist Church believes that “sexual assault is wrong.” (UMC Social Principles 161.P). As a church, we are called to be in ministry to the community and world. In doing so, we are to share the good news that Jesus came to bring abundant life; a life that is full, healthy and whole.

I challenge you and your congregation to take the first step this October in being part of the church’s healing work towards domestic violence in Arkansas.

Here are some ways that pastors, church leaders, and congregations can become involved in the ministry aspects of ending domestic abuse:

Get Connected
The best advice I ever received from my preaching professor were guidelines for the first week at a new appointment, after you’ve outlined your sermon in the morning, take an afternoon trip around the town to learn the location and services offered, including local agencies that work with domestic violence/sexual assault. Get to know the staff and needs of these agencies. There are ways to tour, learn and get involved in the mission of the domestic violence shelters and recovery programs. If you need a place to start connecting, visit the Arkansas Coalition Against Domestic Violence to learn about the work being done in your neighborhood to put an end to domestic violence.

Print a Poster
Make a simple flyer to post bathroom stalls at church or in a discreet location. It’s a powerful statement that abuse is not tolerated and a way to engage in pastoral care without making a phone call. Include information on the poster such as the local shelter name and location with a phone number and/or website, as well as the national hotline phone number. It may also be beneficial to include a line from the Social Principles about the church’s recognition that family violence and abuse in all forms is harmful.

Pray and Take Action
Host a community prayer service in October for the community by inviting other churches and the local domestic violence shelter staff. You can also simply include the women, men, and children across Arkansas in situations of abuse in your personal prayers or Sunday morning prayers of the people. Then, take action to reach out and meet the needs of your local domestic violence shelter.
Whatever this October brings in your life and in the life of the church, take a step in shedding the light of Christ in places of hurt and healing. Be the presence of Christ’s peace for those women, children, and men struggling in situations of abuse.