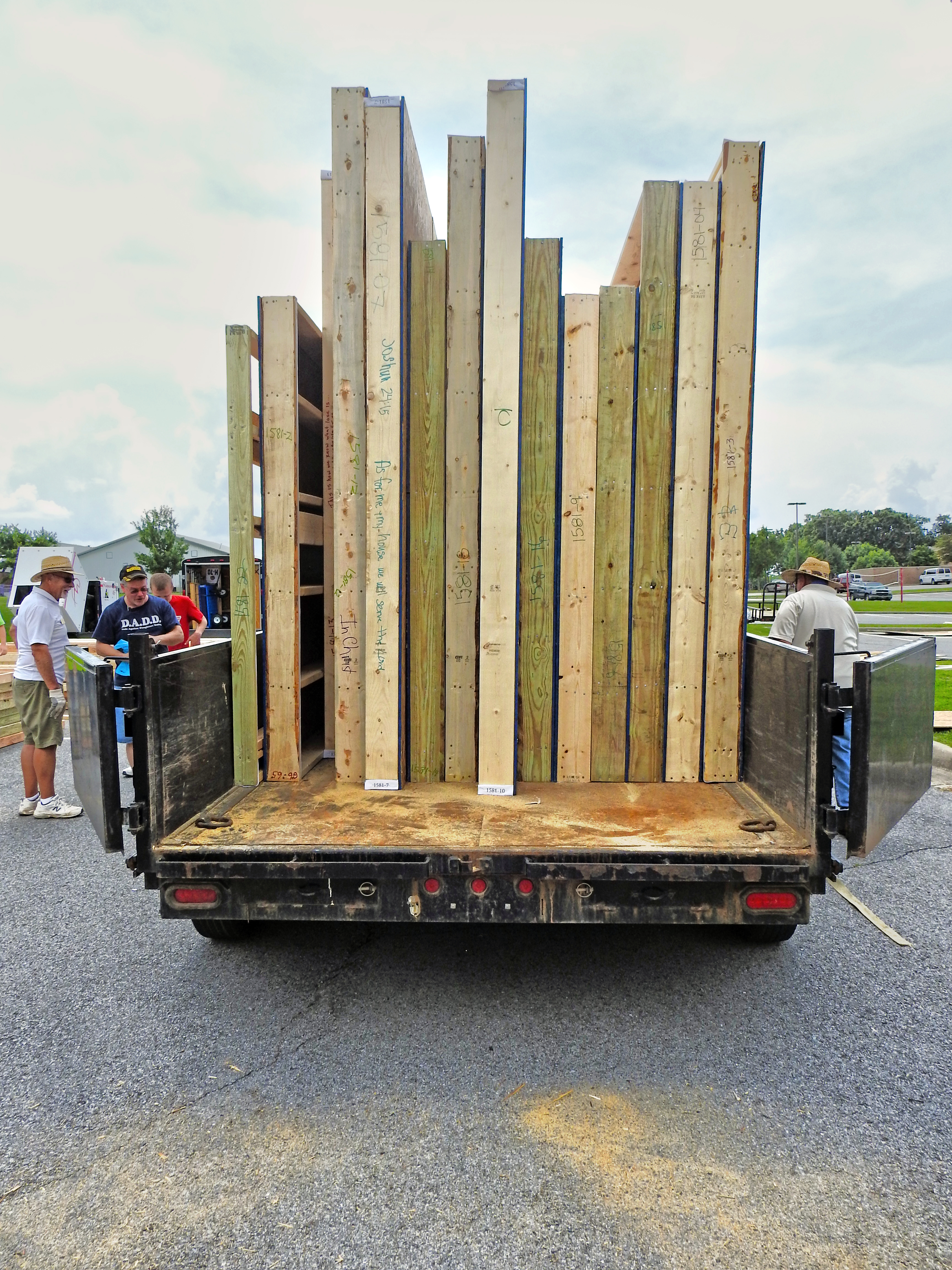 The 40 assembled walls were placed in the back of Byron Mann’s trailer, as well as other trailers, to be transported to the build site in Mountainburg, Arkansas.

Shortly after 4 p.m. on April 13, 2018 – Friday the 13th, as it happened to be – a devastating storm barreled through Western Arkansas, hitting parts of Crawford County. The majority of the storm’s damage – and what was later discovered to be an EF-2 tornado with peak winds of up to 120 mph – devastated the small Ozark Mountains town of Mountainburg.

The tornado cut a path through almost 12 miles of Crawford County, uprooting trees, snapping power lines, flipping cars and trapping residents inside of their homes. In total, the tornado damaged dozens of homes and injured four residents of Mountainburg in the process.

But for one resident of Mountainburg, the tornado did more than just damage his home; it completely destroyed it, leaving him without a place to call his own.

Jay Dollard – a Mountainburg resident whose home was destroyed by the April 13 tornado – was unsure of his future after that fateful spring day. Left to pick up the pieces, Dollard was forced to move in with a gracious friend while he figured out what to do next.

Janice and Byron Mann, who oversee the operations of the United Methodist Church’s Volunteers in Mission and Disaster Response groups of the Arkansas Conference, were immediately aware of the need for help in Mountainburg the day after the damaging storm came through.

Whenever an emergency happens, they get notified through Emergency Management, Red Cross, and other emergency response partners. Once they are aware of a disaster need, they can then try to connect with a community through a local church in the area.

“When a local Methodist Church opens its doors and steps out and responds to a disaster in their community, then that opens the doors for us as the Conference to come in and bring resources,” Janice said.
Mountainburg, however, was a bit different for VIM and Disaster Response, because there was no local United Methodist Church in the town. But the group was able to show up to Mountainburg on the Saturday after the storm and connect with a local non-denominational church in town, as well as city officials, in order to begin the process of delivering aid to those in need. 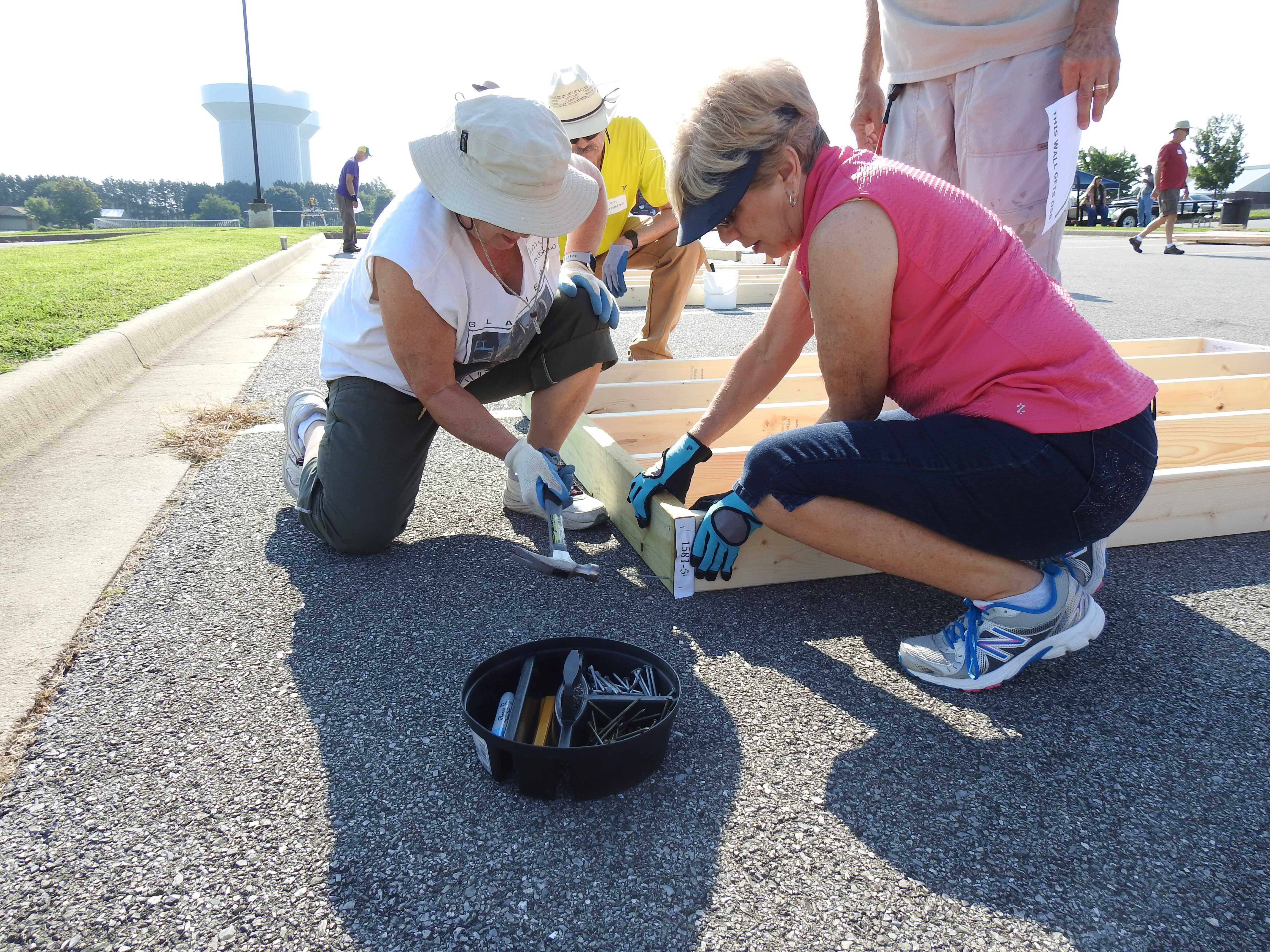 Volunteers gather on Aug. 11 at Central United Methodist Church in Rogers, Arkansas to rebuild a home for a man whose home was destroyed by an April 13 tornado.

A new home was exactly what Dollard needed; once the Manns found out about Dollard’s situation, they set to work figuring out a way to make a new home happen for him.

While overseeing a separate project called ECHO Village to build homes for the homeless and low-income in the small town of Eureka Springs, Byron and Janice found exactly the group they needed to get the Mountainburg project off the ground and running.

Help Build Hope – a program of Crossroads Missions – dedicates their time and resources to training volunteer workers how to build wooden frames for new homes. They provide the training staff, instructions and tools for volunteer events and then teach people how to accomplish the hard work of building a home.

According to their website, Help Build Hope is about “Building Partnerships, Building Relationships, Building Community and Building Homes.” Since 1999, the group has worked to build more than 900 homes for people all over the United States. And they do it all with the help of selfless volunteers who are dedicated to giving their time, effort, and resources to helping others.

This was the gift from Heaven that the Manns were looking for, and Byron quickly worked to set up a volunteer weekend in Northwest Arkansas to build Dollard a new home.

Done In A Day

After presenting the idea of rebuilding Dollard’s home to the Northwest District, three churches in the area – Bentonville First UMC, Rogers First UMC, and Central United Methodist Church – jumped at the opportunity to help Dollard out. 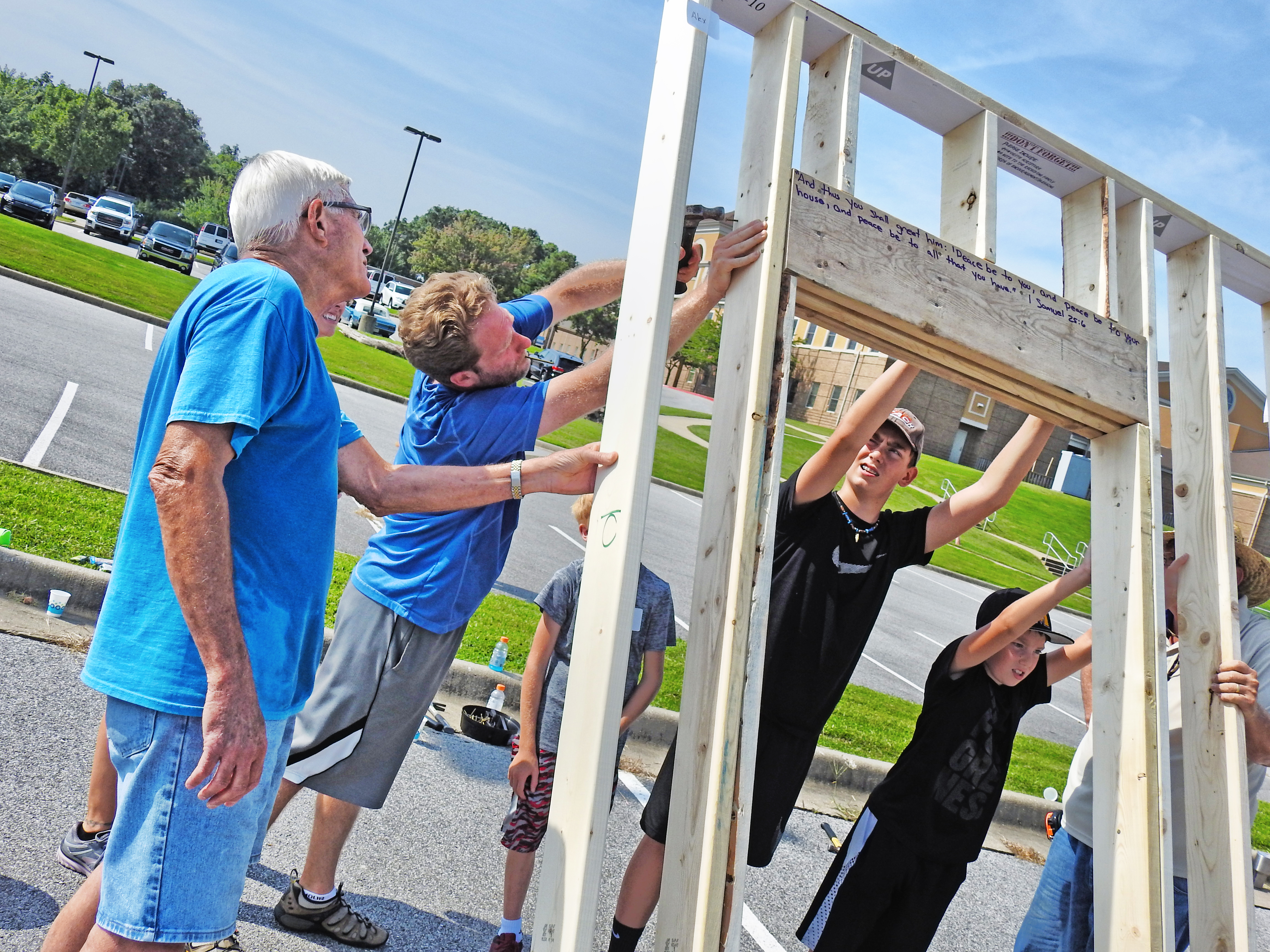 The fundraising for building the house was an ecumenical effort by a variety of groups in Arkansas, including Arkansas Episcopal Disaster Relief, Arkansas United Methodist Disaster Response/UMCOR, Christian Aid Ministries, Presbytery of Arkansas/PDA, and The Salvation Army of Arkansas and Oklahoma.

In total, there were more than 80 volunteers that showed in the parking lot at CUMC to rebuild Dollard’s home. Women, men, children and the elderly all worked together – following the carefully laid out instructions provided by Help Build Hope – to put together all of the interior and exterior walls for Dollard’s new home.

Amazingly, the group was able to finish 40 frames and load them into the Disaster Response truck in fewer than 3 hours. The frames were then driven down to the build site in Mountainburg and unloaded by another team of volunteers.

A few weeks later, once the concrete foundation of the new house was poured, another group of volunteers stood the frames up in preparation for the next steps in the homebuilding process.

All-in-all, the house being built for Dollard will be a two bedroom, one bath house that is around 940 square feet.

As of the publication of this article, the concrete foundation, walls, and metal roofing of the house had been completed.

More Than Just A Project 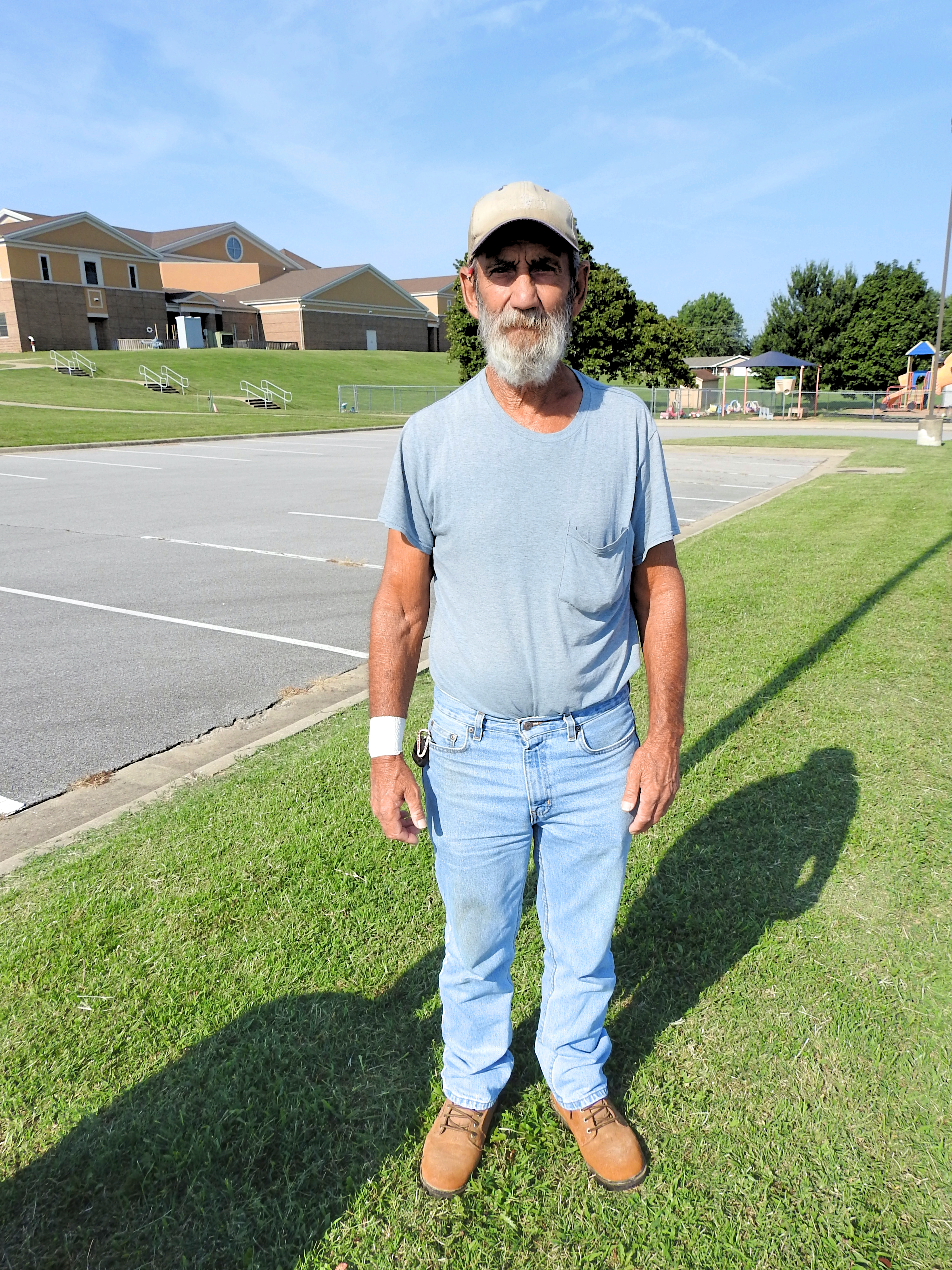 Jay Dollard, whose home was destroyed by the April 13, 2018 tornado in Mountainburg, was present during the building of his home, even joining in to assemble the walls of his home with volunteers.

It wasn’t just Dollard that received a blessing from a new house being built for him, although it certainly was the main focus of the project.

Although Dollard was humbled and amazed at the people who showed up for the building project, he saw something else in the volunteers that day.

“The way a lot of people have talked that I’ve met, they feel like they’re receiving a blessing by helping me and it makes them feel good as well,” Dollard said.

Byron also believes in the spiritual power of volunteering.

“I’ve always said that we’re blessing the people that we’re doing this for, but folks that are doing the work – the ones that are putting their hands on the work and meeting the affected families – it just shows Christ love in a real way,” Byron said. “They aren’t expecting a blessing, they are being one, by being the hands and feet of Christ.”

But Janice stressed that they don’t do these projects to convert non-believers or those of a different faith to believe in the teachings of the United Methodist Church. However, going out and volunteering to help those who are less fortunate opens the door for conversations about faith and spirituality.

For Disaster Response and VIM, the work is never truly done. There’s always a house to rebuild, concrete to be poured, clothing and food supplies to be delivered, or someone who just needs a little help getting through the hard times in life.

Right now, Disaster Response is in the process supplying help to a few other families in Mountainburg besides Dollard. They have replaced a couple of mobile homes in Mountainburg that were damaged by the storm, but they are still needing volunteers to come out and help build the steps, porches, and a wheelchair ramp. They are also finishing up projects in Northeast Arkansas – in the Pocahontas area – that were affected by the 2017 Black River flooding.

ECHO Village, an ongoing project for many years in Eureka Springs, is also being assisted by Volunteers in Mission and Disaster Response.

And of course, the group is always ready to assist when a disaster hits anywhere in the state.

“Our goal is, when we have these small storms all around Arkansas that cause damage and are not FEMA declared as disaster areas, that we can pull these efforts together in other locations,” Byron said. 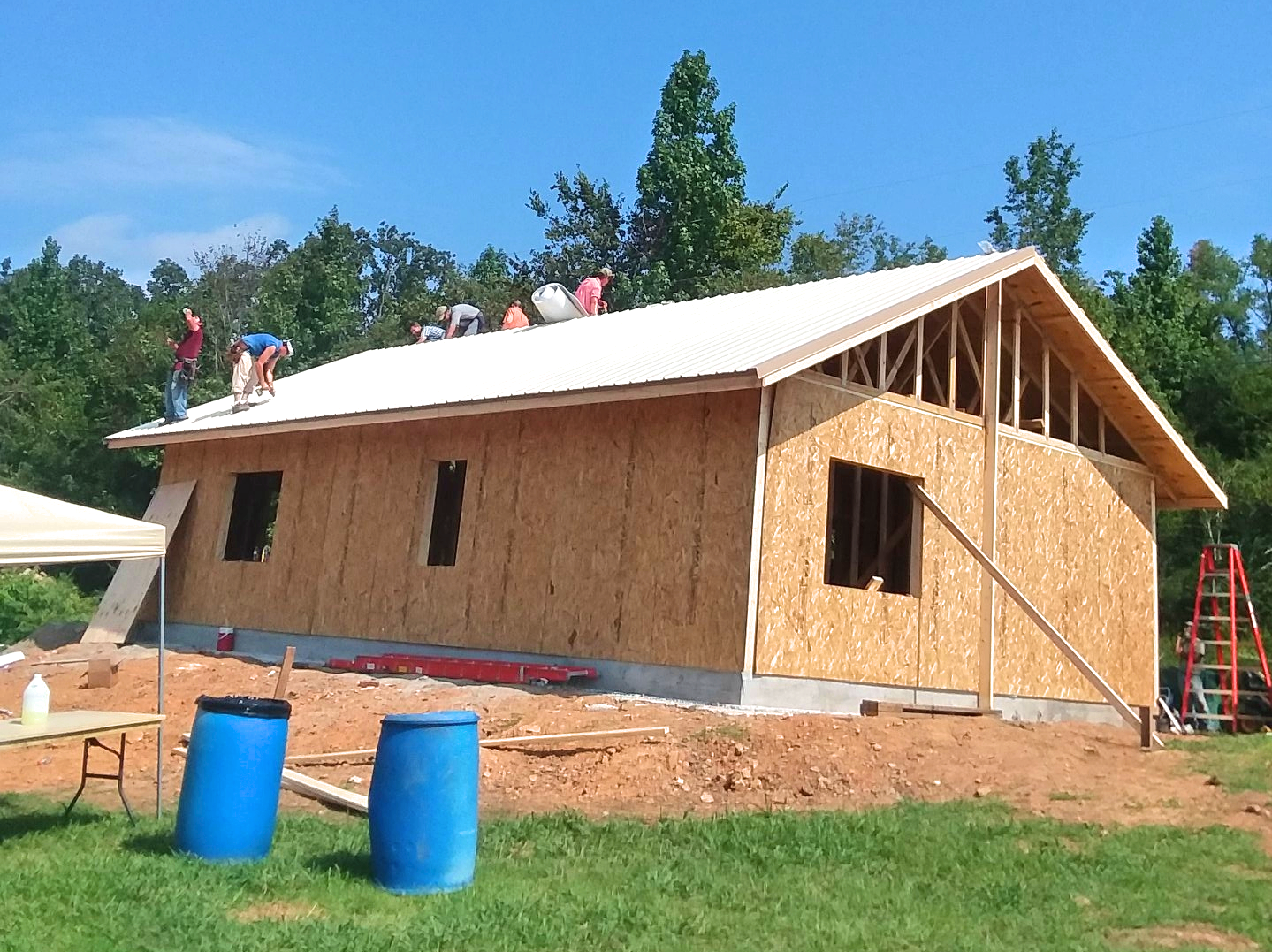 The completed home sits at its new location in Mountainburg, with a brand new roof, provided by Sunrise Truss.

As the work for the day came to a close, Dollard stood watching it all, in awe of the many people who devoted their time to helping him have a new home.

It was no surprise to Janice, however; the labor they had done together that day, in a church parking lot in the middle of the sweltering summer sun, was evidence of a higher power at work.

“When we see that everything has fallen into place – like it has with this project – then we know that God has had a hand in it,” Janice said.